Jim Belushi is chasing the magic in cannabis

I don’t think Jim Belushi was high while we talked on Zoom this week. Instead of a joint, he was puffing on a cigar, but he was still happy and smiling.

“I have my brother’s face on it. I have the Blues Brothers brand. It’s got to be good shit, man.”

Jim Belushi was telling me about his weed, specifically about the small 0.7 gram pre-rolls he sells — the perfect size for the post-Covid era, when passing a joint to a friend is likely discouraged. Belushi started his farm with 48 cannabis plants in 2015. Now, six years and one pandemic later, there are 200 plants in each of his four high-tech greenhouses along the Rogue River in southern Oregon.

We were talking about his new greenhouses supplied in part by GrowGeneration, but Belushi cannot stop gushing about the benefits of cannabis. More than just a celebrity with a weed brand, Belushi is a fully-committed cannabis advocate.

“It’s magic when I do the Blues Brothers,” he said. “And I chase magic on a film set when I’m acting, and chase magic when I’m singing. I mean, I’m always chasing magic, and I’m going to do this cannabis business because there’s magic here.”

Belushi is among a recent group of celebrities diving deep into the world of cannabis. And he’s not shy about it. Look at his social media footprint. Belushi’s Twitter name is ‘Cannabis Farmer: Jim Belushi‘. His TikTok and Instagram feeds are full of clips from his farm. He even has a TV series on Discovery about his farm: “Growing Belushi.”

Cannabis is Belushi’s life right now. He even recently turned down a movie role because filming would take place in the fall, during harvest time. His agent didn’t approve of passing on the opportunity, and told Belushi he represents actors, not farmers. But according to Jim, cannabis farming is more important than acting.

“I’m a cross between Elmer Fudd and Bill Murray,” Belushi confesses. Like Murray in Caddyshack, Belushi is just good enough to be dangerous. According to Belushi, he’s been on the farm more than 200 days during the last year. In his eyes, this is what sets his apart from other celebrity cannabis operations.

Growing cannabis is more than a branding play for Belushi. It’s clear he’s not just trading his credibility and body of work for a hefty check; he’s on the farm, working the land, and tending to the bud he’s dealing.

“My hand is in the soil,” he said, explaining he works the land, ensuring the pH is correct, and that the soil is at the right temperature. He’s curing, smelling, testing, and tasting his crop. 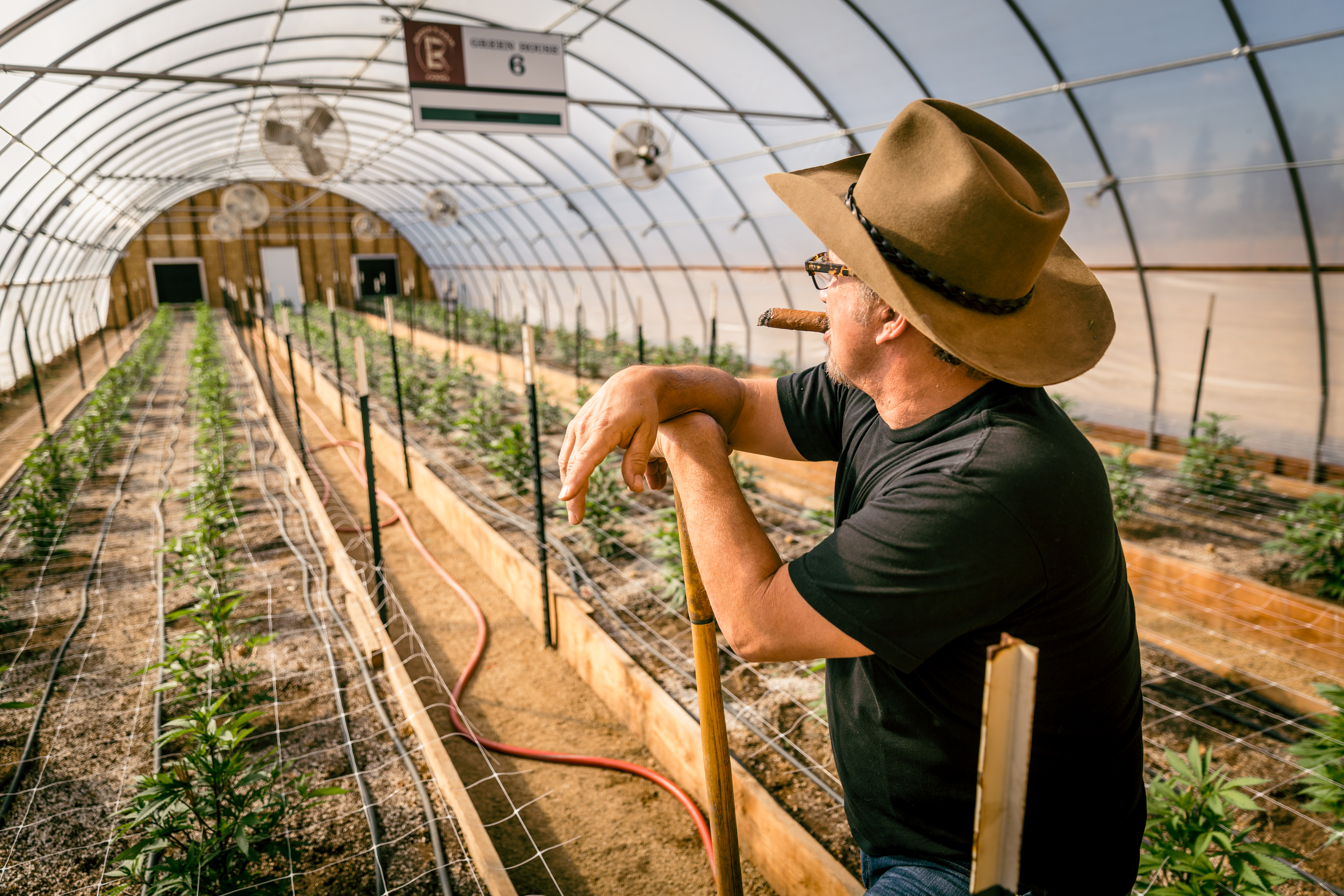 Like many cultivators, Belushi turned to technology to combat pests and increase yields. A team from GrowGeneration outfitted his farm with the goods to mitigate pests and improve the quality. He says what they were selling for $1,000 a pound a year ago is now going for $2,200 a pound, and points to the improved growing facility as a significant factor.

Jeremy Corrao, VP of Commercial Operations at GrowGeneration, says the cannabis industry benefits from a range of new technologies that enable operators to see a faster return on their investments. He points to new lighting technology as an example.

“We’re seeing the most movement in people moving from energy-inefficient solutions into energy-efficient solutions,” Corrao said, explaining that the industry still has doubters who are hesitant of new technology. Yet, he says it’s lowering the cost of goods and improving ROI.

Corrao explains that functions and practices found throughout the agriculture industry are finally making their way to cannabis cultivators such as Belushi.

Yet even with new greenhouses complete with automated systems, some growers like Jim Belushi still rely on nature for help.

“[Belushi Farm] is in Southern Oregon with 192 days of sun,” Belushi said, stressing his love for the area. Moreover, his new greenhouses rely on the Oregon sun and still offer localized climate control, and pest management, which means he can have four growth cycles per year. This hybrid approach forgoes a closed climate system in favor of something that works within Belushi’s world. 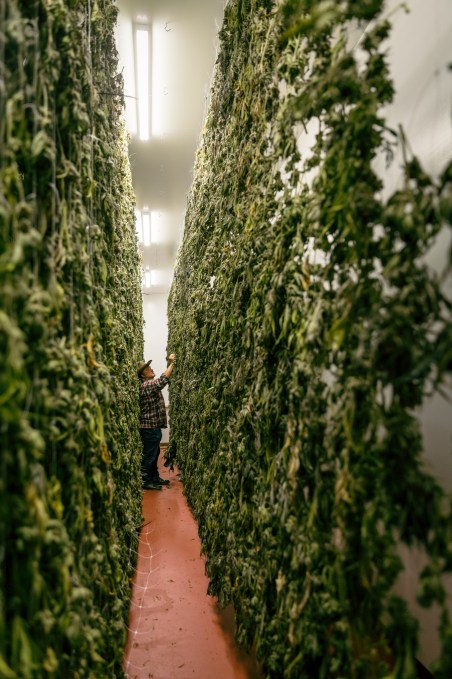 As legalization draws closer, cultivators are constantly look for an edge amid more competition — better soil, quicker harvest cycles, new strains — and Belushi has his name.

“Has the Belushi name always been associated with pot?” I ask Jim. I’m thinking back to the days of his departed brother, John Belushi, the always-on, always-authentic star of the 1970’s and ’80s. After all, substances were imbibed, smoked, and regularly snorted in those days, and John Belushi was a manic presence in much of 1980s comedy.

“Not pot, but fun”, he says after some thought. Jim gives credit to his brother John for starting the Belushi brand in 1975. To him, the Belushi brand represents “trying to make people feel good with a sense of humor or entertainment.”

Look at the brands from Belushi Farm: Blues Brothers, Belushi’s Secret Stash, and Captain Jack, named after the O.G. weed dealer of the early days of Saturday Night Live. Each of these brands offers strains true to Jim Belushi’s perspective on his name, too. There’s hardly anything offered with THC levels that would be considered gas (aka, stuff that gets you really high), but each offers respectable characteristics. That’s by design.

“My stuff has more to do with great blends of terpenes and THC,” Belushi said. “[This is] to create more of a medicinal effect that sends someone on a pathway to healing.” He added, laughingly, he has a couple of strains hasn’t smoked. He’s scared of them. Likewise, he looks at some of the strains offered by other celebrities as ready to rip and roar thanks to sky-high levels of THC. He hasn’t tried those either.

I ask why he thinks it’s exciting and newsworthy when celebrities launch a cannabis brand. Belushi is hardly the only one doing it. Seth Rogen and Evan Goldberg just launched Houseplant in the U.S., a cannabis brand offering dried flower and house goods. There’s Jay-Z with his upscale cannabis brand, Monogram. Even Martha Stewart is hawking cannabis, albeit in CBD gummy form.

Belushi is hesitant to compare his product to his celebrity competitors (probably related to his self-identification as a cultivator), but points to Snoop and Willy’s original celebrity pot brands as paving the way for him and others.

The failed war on drugs

New regulations are quickly changing the cannabis industry. As more states decriminalize and regulate cannabis, different industry segments are looking to the federal government to loosen its hold on the cannabis business.

For Belushi, access to traditional banking services would immediately impact him and the industry as a whole. And it could be coming soon: Two weeks ago, the U.S. House of Representatives passed a banking bill with broad bipartisan support.

“This is a very exciting time in the cannabis world,” Belushi said. “People have seen changes in others [who partake in cannabis]. Tumors are shrinking, seizures are stopping, people are sleeping, and people are getting better. It’s interesting because, no matter if you’re conservative or liberal or old or young, everybody knows someone that has suffered deeply.”

“Cannabis is not a gateway to drugs,” Belushi said. “It’s a pathway to healing.”

And yet, there are countless individuals in prison because of this so-called pathway to healing. Jim Belushi is working on that, too.

“Get them out,” Jim shouted when I talked about the Last Prisoner Project’s current goals. He’s referring to those incarcerated for crimes involving cannabis. To Belushi, who helps the cannabis activist group, this is a serious effort.

“It’s time to shift some energy to real justice,” Belushi said with deep passion. “Look at the Last Prisoner Project. It’s really a symbol that the war on drugs is over. It’s done. It’s ruined. The war on drugs ruined us. It ruined black and brown communities, which were especially hard hit.”

“Don’t get me started,” Belushi warned, as he laughed and calmed down.

Belushi says the project is riding a wave right now, and they’re finding more states’ Attorneys General are answering their calls. But there are still needs, he says. The project can always use capital, as a lot of the work is done pro bono. And there’s a constant need for people to write letters and sign petitions — all of which are readily available on the project’s website here.

“And it would be great if people in the [cannabis] industry hire those that get out,” Belushi said, calling on the industry to lean in and help “these men and women who have been incarcerated for so long.”

He’s not just suggesting it as a course of action for others; he’s actively helping raise capital, too. The Blues Brothers is hosting a fundraiser at M.J. Unpacked this coming October in Las Vegas. Belushi, actor, comedian, weed farmer, and now a member of the Blues Brothers beamed as he spoke about performing for the Last Prisoner Project.

“We’re gonna have a big party there,” he said, “and we’re going to raise lots of funds, too.”

Because everybody needs someone to love.