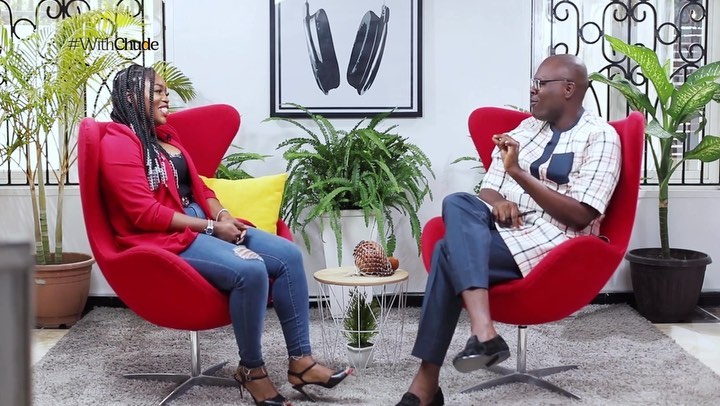 In the latest episode of “With Chude,” Chude Jideonwo chats with singer and actress Bisola Aiyeola.

She talked about her rise to stardom: from her father walking away and never returning; her mother losing her business to a fire and never recovering; having to drop out of school and not finish university; getting pregnant very young and falling out of love with the father; struggling for years with auditions and still not blowing up after Project Fame; and what the horrible experience of poverty taught her about the world.

As expected this was deep, open and heartfelt.

On her mum’s reaction when she revealed she was pregnant:

When I told her that I was having a baby after Project Fame, my momsy wailed. She was like, ‘who’s the boy? He has stolen my jewel’. I’ve never seen my mum that sad before. She just felt like this was what was going to escalate us to success, happiness, and goodness, and I was having a baby. It broke me, and I think that’s the only time that I’ve seen my mum not really be supportive, but she got over it. I had my daughter when I was 23, and she just told me to have the baby and she’ll look after her So, now it gives me so much joy knowing that she’s happy and I can take care of her.

On her mum losing her business to a fire and how they survived:

My mom had two stores in Lagos Island. We were living la vida loca — we were the children that were called the London children because almost every new year, every new session, we’re resuming with new school bags, new school socks, everything jand! My mom used to travel a lot, and then life hit her — her stores got burnt and she never got back on her feet. It was just like we had hit when I say rock bottom, rockest of the rock bottom and it was after that time we started living from one family member’s house to another family member’s house changing schools and it wasn’t a fun experience.

In Case You Missed It: Highlights from the 17th Edition of The Experience
Watch the Official Trailer for “Ijakumo: The Born Again Stripper”