THIS Sunday, two titans of English football take to the field as Premier League leaders Arsenal make the short trip to Stamford Bridge to face off against bitter rivals Chelsea.

Not notoriously a rivalry but the fixture gathered steam in the mid-noughties with the rise of Jose Mourinhoâs Blues who went neck and neck with ArsÃ¨ne Wengerâs Gunners alongside a rather dormant Manchester United under Sir Alex Ferguson.

Numerous incidents added further fuel to the fire over the next few years including Ashley Coleâs switch to the Bridge, the infamous 2007 fiery League Cup final, Mourinho and Wengerâs touchline tussles and some classic league clashes.

Normally, over the last decade, when the two English giants go to war, Arsenal hope to put a dent in Chelseaâs title charge while the Gunners aim for top-four simplicity each year.

However, this time round, things are wholly different.

Arsenal are the team to beat this season as Mikel Artetaâs side are looking to head into the mid-season World Cup break at the summit of the table.

Meanwhile, Chelsea suffered their first defeat under Graham Potter last Saturday when the coachâs former side Brighton mauled the lacklustre Blues 4-1 at the Amex.

The West London club look a shadow of the team that won the Champions League just 18 months ago.

Chelsea risk falling further behind the rest of the pack with a loss today, while Arsenal need to pick up another three points to fend off a hungry Manchester City who are breathing down their neck.

We look at three areas where the game can be won and lost from a tactical perspective.


HOW TO GET FREE BETS ON FOOTBALL

This weekend, Pierre-Emerick Aubameyang could face his former club in Arsenal.

Having spent five seasons with the Gunners and appearing in 163 matches, the prolific Gabonese centre-forward scored a total of 92 goals across all official competitions.

Right now, it seems that there is a fifty percent chance the experienced number â9â starts at the Bridge against the side he once captained. 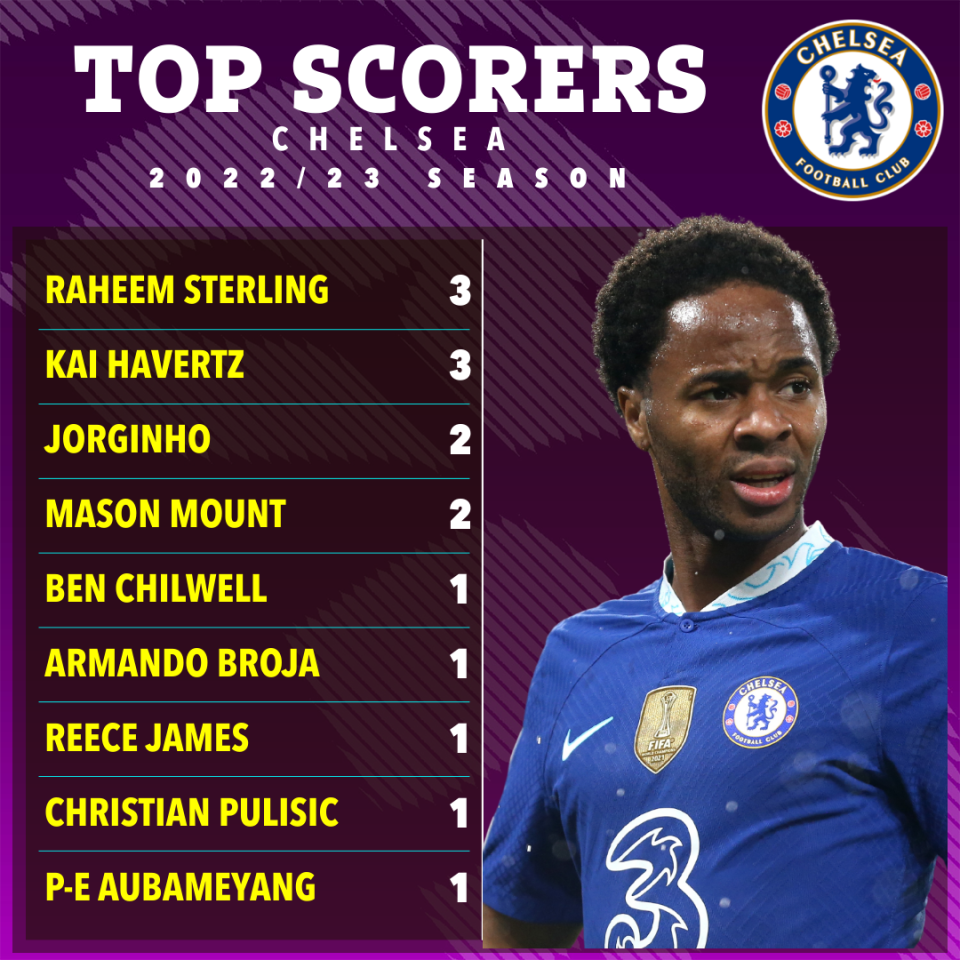 Potter seems to have the same problem that Erik ten Hag is challenged with at Old Trafford.

The two progressive coaches have wonderful goalscoring threats among their ranks that are in direct confrontation with the way the managers want their teams to play, especially defensively.

Against Manchester United two weeks ago in what became a chess match between the esteemed tacticians, Potter went with Aubameyang leading the line in a 3-4-3.

However, having Aubameyang in the starting eleven hinders the Bluesâ ability to press their opponents high up the pitch in the same way that Cristiano Ronaldoâs presence in Unitedâs forward line makes cohesive pressing extraordinarily difficult.

The Chelsea boss traded potency in the box for pressing which was a questionable decision given that the Red Devils are still not overly comfortable building out from the back just yet and are prone to dangerous errors.

Overall, during the game, Chelsea ended with a Passes allowed Per Defensive Action rate of 10.54, which is a metric that measures how many passes a defending team allow the opposing side to make before intervening.

Nonetheless, in the next league game, this lowered to 7.94 in the defeat at Brighton, meaning that Chelsea let the Seagulls have less of the ball than United were allowed during each attack.

What changed? Itâs very simple. Potter dropped Aubameyang to the bench in place of Kai Havertz, who was narrowly flanked by Conor Gallagher and Mason Mount in Chelseaâs 3-4-2-1.

Chelsea were far more coordinated in the final third when applying pressure and caused Brighton some trouble when Roberto De Zerbiâs side passed out from the back on the deck.

One of the biggest decisions that Potter will be forced to make today, once again, is potency versus pressing.

The 47-year-old must weigh up which will be more beneficial to the Blues against an Arsenal team that are adamant at playing out under Arteta.

Will Aubameyang start, causing Chelsea to drop deeper down the pitch as a unit, or will the Gabon international take a backseat on the bench yet again as the Blues look to get in the face of the league leaders and suffocate them in their own box?

Gabriel Jesus is not a natural goalscorer.

During his time with Manchester City, the Brazilian performed well in a number â9â role in his overall play but would need a plethora of chances between each goal.

At Arsenal, the same pattern has emerged. 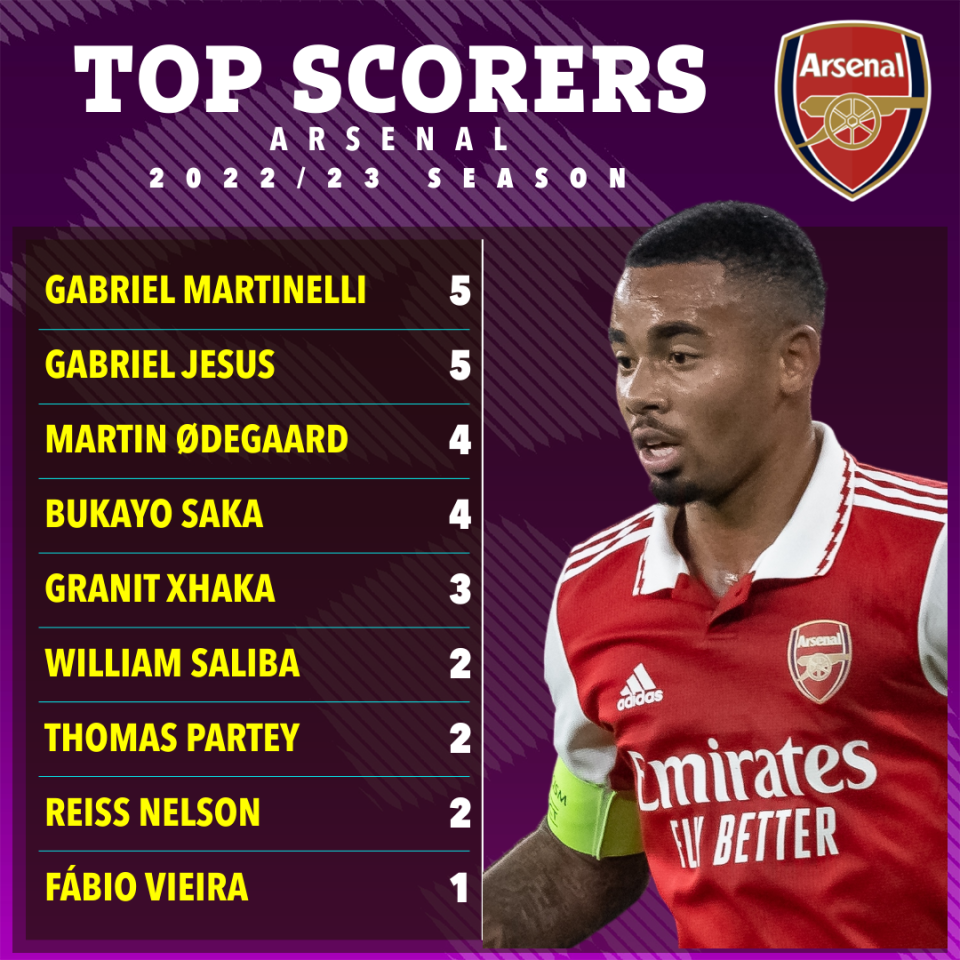 Jesusâ lack of output in the box has been overshadowed by his ability to link everything together as the apex of the system.

Mikel Arteta prefers his strikers to play with their backs to goal as opposed to being forward-facing.

This is one of the tactical reasons behind why Alexandre Lacazette was favoured by the club legend over Aubameyang, particularly last season.

Having the centre-forward playing with his back to the goal allows teammates to play passes between the lines into the frontmanâs feet. From there, he can hold off the oppositionâs defenders and link up with others around him.

Jesus may not be the largest number â9â in terms of physical stature but his hold-up play is one of the best in Englandâs top-flight.

Against Nottingham Forest last Sunday, as the visitors were already dizzy from a second half flurry of goals, the Brazil international played a hand in dealing the final blow by getting the assist for Martin Odegaardâs superb strike after some impressive link-up with the skipper.

Chelsea need to deal with the threat that Jesus poses in and around the box.

His role for Arteta greatly exceeds merely putting the ball in the back of the net.

How can Chelsea stop the free-scoring Gunners?

Prior to last weekendâs humiliating defeat on the south coast, Chelsea had conceded merely four goals under Graham Potter, including just twice in the league.

The Blues have been sturdy defensively, with the exception of the Brighton drubbing, which is something that will be needed today against the second-highest goalscorers in the division right now.

One area of Chelseaâs tactical setup that will be interesting to observe from the get-go is whether Potter will send his players out in a back four or a five.

The relatively new head coach has primarily preferred to deploy a 3-4-3 since taking over from Thomas Tuchel, which becomes a 5-4-1 when Chelsea are sitting deeper on the pitch.

This has caused major issues for the London giants in their last two matches.

Against Manchester United, having been dominated for the opening half-hour, Potter replaced Marc Cucurella with Mateo Kovacic, switching the shape from a 3-4-3 to a 4-4-2 diamond as the Blues were being overrun in the middle of the park.

However, utilising a back five could actually be beneficial for the hosts during their clash against Arsenal.

Going with a back five for Chelsea may allow the home side to go man-for-man against Arsenalâs forward line in a five versus five situation.

When playing from the deeper areas of the pitch through to the final third, Arsenal play down the flanks, creating overloads and using runs in behind to try and break through their opponentâs defensive structure.

A five-man defensive line would allow each defender to try and win their own battle while also still having coverage over the opposite side in case Arsenal attempt to switch the play.

Moving the ball from one side to another is a key pattern used by the Gunners to get their wingers isolated against the defensive teamâs fullbacks/wingbacks.

Using three centre-backs would also allow one of the central defenders to step out of the defensive line and get touch-tight to Jesus when the nimble Brazilian drops deep to receive while also ensuring that there is enough cover left at the back with the remaining four.

So what does this all mean?

The onus is on Chelsea to get three points in this bout, being the home side.

A draw, in hindsight, could be an excellent result for the visitors come the end of the campaign.

However, having scraped a draw against Manchester United and then being on the receiving end of the hiding by his former club, Potter will be under pressure to get all the points in the bag at the Bridge after what was a relatively comfortable first few fixtures in the dugout.

There is a lot at stake in this match even though itâs still early days.

Both Potter and Arteta will be desperate to get their tactics right to continue pushing for their respective objectives.