Candi Toto, from the Muscowpetung First Nation, says she is done waiting for apologies from the government and the Roman Catholic Church when it comes to their involvement in the residential school system.

“I think we’re all passed that now. We just want to start seeing actions towards reconciliation,” Toto said.

“We need more programs for our children and we need more in our schools to learn about what happened in those residential schools.”

On Sunday, Pope Francis issued a statement regarding the discovery at the Kamloops Indian Residential School site. However, he stopped short of an official apology — which is one of the Truth and Reconciliation’s Calls to Action.

“I join with the Catholic church in Canada in expressing closeness to the Canadian people traumatized by the shocking news,” Francis said. ”This sad discovery increases the awareness of the sorrows and sufferings of the past.”

I join the Canadian Bishops and the whole Catholic Church in Canada in expressing my closeness to the Canadian people, who have been traumatised by shocking discovery of the remains of two hundred and fifteen children, pupils at the Kamloops Indian Residential School.

“May the political and religious authorities continue to collaborate with determination to shed light on this sad affair and to commit to a path of healing,” Francis added.

Toto says she wasn’t surprised by the Pope’s lack of apology. And for her, the path of healing starts with sharing her story.

Until recently, Toto says she didn’t know how to talk about her residential school experience. However, she says the news of the 215 children found in Kamloops brought back a lot of feelings for her.

“I started telling my daughter who hasn’t heard my stories,” Toto said.

“She didn’t know the depth of residential schools and how much they hurt our people.”

Toto first went to Lebret when she was about seven years old, and only attended for a month.

“I missed home. I didn’t want to be away from my family,” said Toto, adding she ran away from all three schools a number of times.

She spent the most time — one year — at Muscowequan Indian Residential School on the Muskowekwan First Nation near Lestock. 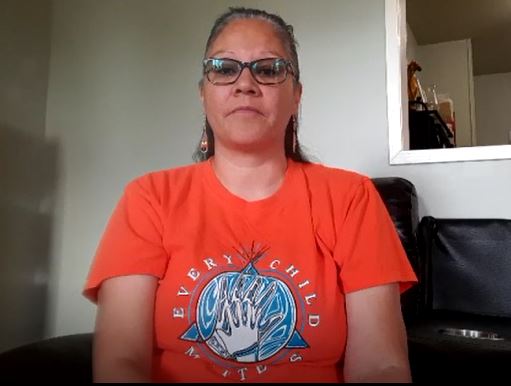 “It wasn’t a very good experience,” she said.

Toto, who loved to play and watch sports, said she was punished every time she tried to participate in extra-curricular activities.

Her punishments ranged from cleaning the stairwell with a toothbrush and washing windows to hauling water and pulling weeds in the school’s treeline. She believes that’s the cause of her anxiety.

“My house has to always be clean,” she said.

“I live with a lot of anxiety over that. It felt like I was always going to be in trouble if my house wasn’t clean.”

Toto isn’t the only one reliving the trauma of residential schools.

FSIN Chief Bobby Cameron says he immediately thought of all the survivors and their families when the Pope issued his statement over the weekend.

Chief Cameron says an apology and an acknowledgement from the Catholic church is part of the “healing journey” for many survivors.

“It’s only going to take the Pope maybe 40 seconds, or 215 seconds, to issue a public, genuine apology,” he said.

Last week, Catholic Archbishop Don Bolen issued a statement on behalf of the Archdiocese of Regina, saying, “We are profoundly sorry for the hurt that actions and decisions of our church in the past have caused to Indigenous Peoples and in ways that we presently re-traumatize by our actions and inactions.”

Bolen recognized an apology is a first step, not the final step and says the archdiocese is “learning how to walk in solidarity.”

The Indian Residential Schools Crisis Line (1-866-925-4419) is available 24 hours a day for anyone experiencing pain or distress as a result of their residential school experience.