JAKE PAUL arrived in Saudi Arabia for his brother Logan’s WWE title match with Roman Reigns… but got trolled by Paul Heyman.

Logan challenges Reigns for the undisputed WWE Universal championship on Saturday in Riyadh. 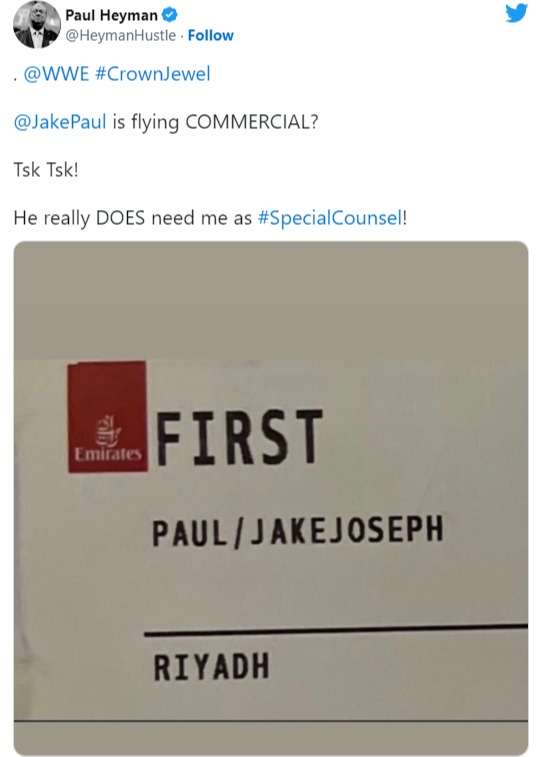 And younger sibling Jake flew out to join the party just days after beating UFC legend Anderson Silva in the boxing ring.

The YouTuber-turned boxer posted his first-class ticket heading to Riyadh.

And wrestling promoter Heyman jibed: “@JakePaul is flying COMMERCIAL? Tsk Tsk! He really DOES need me as #SpecialCounsel!”

In reality, Paul’s first-class ticket from America to Saudi Arabia could have cost up to Â£30,000.

But that is chump change for the American, 25, who last year made Â£30MILLION through boxing alone.

Now it is his brother’s turn, who in only his third WWE match challenges the biggest star in the sport.

And Logan, 27, has vowed to make this more than just a celebrity cameo in the WWE ring.

He told ESPN: “If you’re just in and out like a lot of celebrities — they do it once and they get their recognition and then they’re done.

“But I wanna be more than that ’cause I think I can be, I know I can be.

“The only thing that’s preventing me from being potentially one of the greatest in this sport is the time and energy that I put into it, which is the one thing I’m good at.

“But something about wrestling is so exciting, right? It’s entertaining. I get to be a showman.

“I get to be physical. I get to get highlight-reel clips on my social media. Pays well. WWE is very generous.”