For two men walking from northern Alberta to Ottawa to raise awareness about missing and murdered Indigenous women and girls, the news that a mass grave had been discovered at the site of a former residential school in B.C., has only served to strengthen their resolve.

“We are fighting for every lost child in this world,” Adam McDonald said Monday night.

McDonald and Stanley Gilbert Jean arrived in Edmonton on Monday to a warm reception organized for them near the Alberta legislature.

McDonald said they heard about the horrific discovery of the mass grave while they were on the first leg of their journey, which began in Fort McMurray, Alta.

He suggested it reaffirmed to him that concerns that have been raised by Indigenous people for decades have not been listened to.

“Our First Nations issues and Métis issues and Inuit issues have been not heard,” he said.

“It’s all going to resurface, and we’re never going to stop fighting for the missing and murdered Indigenous women and girls.”

Jean said the walk marks his first journey to raise awareness about missing and murdered Indigenous women and girls, and added that the expedition is important for him and his sobriety as well.

McDonald said he began to advocate for more awareness about the issue by walking five years ago and has already walked every major highway in Canada.

“Once I start something, I’m never going to give up,” he said. 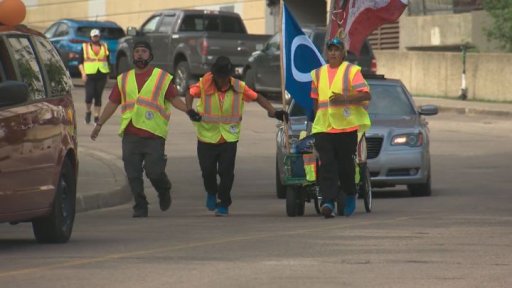 Adam McDonald (right) and Stanley Gilbert Jean (centre) arrived in Edmonton on Monday to a warm reception organized for them near the Alberta legislature. The are walking from Fort McMurray Alta., to Ottawa to raise awareness about missing and murdered Indigenous women and girls.

Judith Gale, the leader of the Bear Clan Patrol Edmonton Beaver Hills House, organized Monday night’s event to welcome the men. She said the cause is particularly important to her because her sister was murdered more than 40 years ago and she does not believe police took her case seriously.

“Forty years ago, they never looked for her and still, 40 years later, they aren’t doing anything,” she said. “She laid in the morgue for three months with a tag on her toe as a Jane Doe.

“It’s a cause that’s dear to my heart and I do it for my sister.”

In June 2019, the chief commissioner of the inquiry into Missing and Murdered Indigenous Women and Girls (MMIWG) said the issue is the result of a “persistent and deliberate pattern of systemic racial and gendered human and Indigenous-rights violations and abuses, perpetuated historically and maintained today by the Canadian state, designed to displace Indigenous people from their lands, social structures and governments, and to eradicate their existence as nations, communities, families and individuals.”

After releasing the inquiry’s final report, the commissioner, former B.C. judge Marion Buller, told a crowd in Ottawa that “this is genocide.”

READ MORE: ‘This is genocide’: Final MMIWG report says all Canadians have role in ending violence

Among the issues the federal government says it plans to take on in light of the report are human trafficking, gender-based violence, health inequalities and systemic racism.

READ MORE: Here’s the 1st steps Canada plans to take in light of the MMIWG inquiry

Gale said the issue of Indigenous children being taken away by their families is a very personal one for her as well. She said she was taken away from her family during the Sixties Scoop and adopted out to a white family thousands of kilometres away.

Despite what happened to her, Gale said she was always resilient when it came to maintaining her Indigenous identity, and suggested McDonald and Jean’s walk is keeping traditions alive as well.

“In our community, our men are so important,” she said. “They play an essential role and their role is to be warriors, to be our protectors.

“(For them to) go walking across Turtle Island in commemoration of (the) missing and murdered is fantastic. I wish more warriors would step up.”

“This journey is so important to raise the awareness, because after the two-year anniversary of the national inquiry, we haven’t seen anything,” she said.

“We know that people on the ground and grassroots organizations and advocates and the people, we have to do the work ourselves. We’re realizing that every day.”

McDonald and Jean don’t have a set date for when they expect to arrive in Ottawa. Harpe said everywhere they go along the way, they receive love and support and feel compelled to meet with the people supporting them as their campaign continues.

“We’re seeing a lot more non-Indigenous people asking how they can help,” Harpe noted. “It’s important that the people with decision-making power know that the people care about change.”

Harpe also called McDonald and Jean warriors and said they are setting a good example for other Indigenous men and boys, a demographic she believes more attention needs to be paid to.

“It’s a shame that Indigenous men and boys are left out of the national inquiry,” she said. “They go murdered and missing and are sexually abused as well.”

McDonald said while the walk is undoubtedly a long one, he is committed to seeing his journey through.

“Every step of the way, we’re gonna make it,” he said. “Once we start to go down, we know how to pick ourselves back up and keep going.”

Jean also said his determination will not waver.

“I’ll keep on going with my bro here,” he said.

–With files from Global News’ Sarah Komadina and The Canadian Press