Belgium vs Canada – World Cup Group F: How they got there, current form and prediction as Red Devils eye early win

Roberto Martinez’s side are blessed with some world-class talent – but have just a third-place finish from Russia in 2018 to show for it. 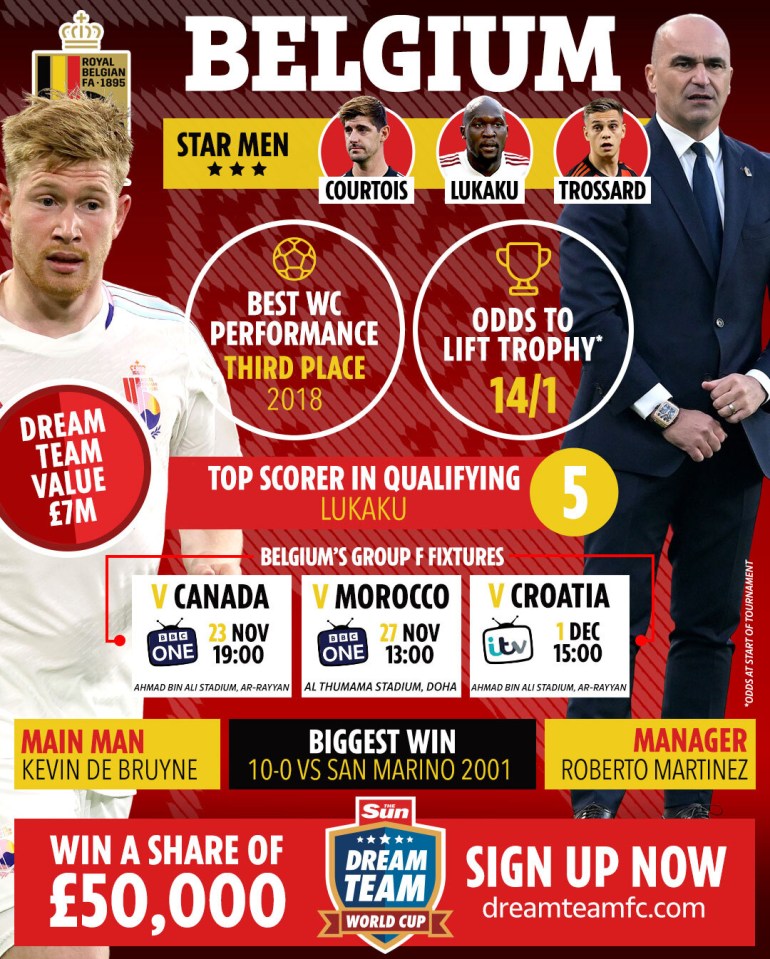 Canada, meanwhile, are back at the World Cup for the first time since 1986 and still looking for their maiden goal.

The Ahmed bin Ali Stadium in Al Rayyan will host this Group F blockbuster clash which kicks off at 7pm UK time.

Belgium come in as the heavy favourites, sitting second in the world according to Fifa, against the 41st-ranked country.

So SunSport previews the showdown that could be Kevin de Bruyne, Romelu Lukaku and Thibaut Courtois’ last chance to be world champions.

Belgium: The Red Devils made a safe passage through their Uefa qualifying group ahead of Wales, Czech Republic, Estonia and Belarus.

They recorded six wins and two draws from their eight games, scoring 25 goals in the process – including eight against Belarus.

Canada: Considering they had not qualified for the World Cup since 1986, the Canadians looked like an experienced side as they topped CONCACAF qualifying on 28 points from 14 games.

That saw them pip Mexico and USA while Costa Rica went into the play-offs. Canada sealed it by thumping Jamaica 4-0 in March.

Belgium: They had the worst warm-up game imaginable by losing 2-1 to Egypt in a friendly on Friday.

Before that, Belgium lost their last competitive game to the Netherlands in September, three days after scraping past Wales.

Canada: The Maple Leafs crammed in two friendlies before the tournament, a 2-2 draw with Bahrain and then a 2-1 win over Japan.

Canada also beat Qatar 2-0 in September but lost by the same scoreline to Uruguay in the same week. 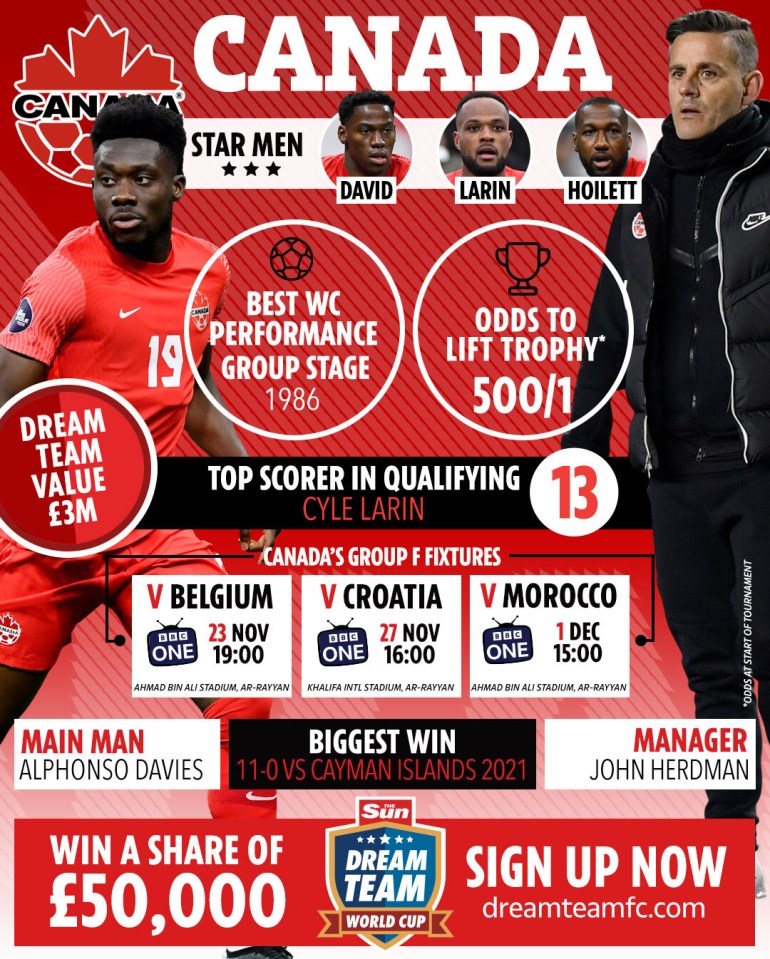 Belgium: It’s a familiar face in the Belgian dugout with Roberto Martinez still in charge.

The former Swansea, Everton and Wigan boss – assisted by Thierry Henry and Thomas Vermaelen – took over in 2016 and surely must prove himself as a top boss in Qatar.

He switched across to the men’s side in 2018, using his winning formula to fire Canada up the rankings.

Belgium: The standout name is De Bruyne, the creative heartbeat of the side.

Martinez builds the side around him and he is given complete freedom to play in areas of the pitch where he can hurt teams.

Courtois is arguably the best goalkeeper at Qatar 2022 while Eden Hazard and Youri Tielemans can cause damage – although Lukaku is ruled out.

Canada: The star man is Alphonso Davies but the Bayern Munich pace machine is an injury doubt and may not be risked.

Jonathan David, the Lille forward, and Club Brugge winger Tajon Buchanan may be left to try and hurt the Belgian defence instead.

The two sides have played once before in 1989.

That game finished 2-0 to Belgium.

What TV channel will show the game?

Belgium vs Canada will be shown live on BBC One in the UK.

You can live stream the action from the BBC iPlayer, which is available for download onto your mobile or tablet device.