Our top celebs including Piers Morgan, Jack Wilshere & Carol Vorderman are ready to take YOU on in Dream Team World Cup

THE World Cup is well underway but it’s not too late to join Dream Team!

We have a star-studded celebrity line-up who have their sides picked for battle and are looking to take YOU on!

When building Mini-Leagues to take on your mates, why not join thousands of others who are looking to get the better of our team of celebs – including Piers Morgan, Jack Wilshere and Carol Vorderman!

Just head to the League Hub when your team is picked and enter in the League Code attached with the celeb below.

Here is our squad of famous faces and their team selections. 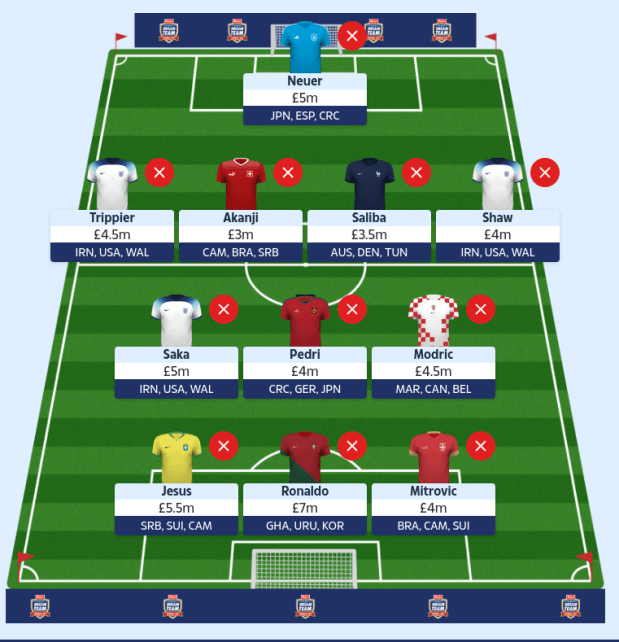 There are not too many surprises in Piers’ selection, with a few Arsenal players making the cut.

Luke Shaw is the second of the Three Lions picks, alongside Kieran Trippier as the third selection and another ex-Tottenham man in Luka Modric in midfield.

Manuel Neuer is in goal with Manuel Akanji in front of him in a back four, Pedri the other selection in midfield while Aleksandar Mitrovic joining Jesus in attack.

“But that is just ten players”, I hear you scream. Of course, Cristiano Ronaldo spearheads Piers’ attack. 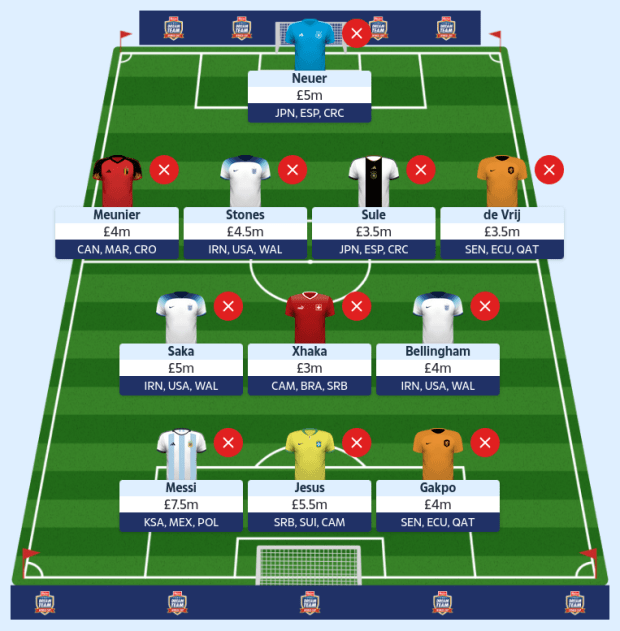 There’s an Arsenal theme in and amongst ex-Gunners man Jack Wilshere’s team, with Saka and Jesus joined by Granit Xhaka.

A young, promising English midifielder in his time, Wilshere has picked Jude Bellingham in the middle, with Cody Gakpo joining Jesus and Lionel Messi in attack.

Another side without too many surprises as Manchester City diehard Hatton PACKS his side with Sky Blues players.

Ahead of Jordan Pickford in goal, he has gone full-Pep Guardiola by selecting Joao Cancelo, John Stones, Manuel Akanji and Nathan Ake.

While Haaland stand-in Julian Alvarez leads the line with Andrej Kramarić and Neymar. 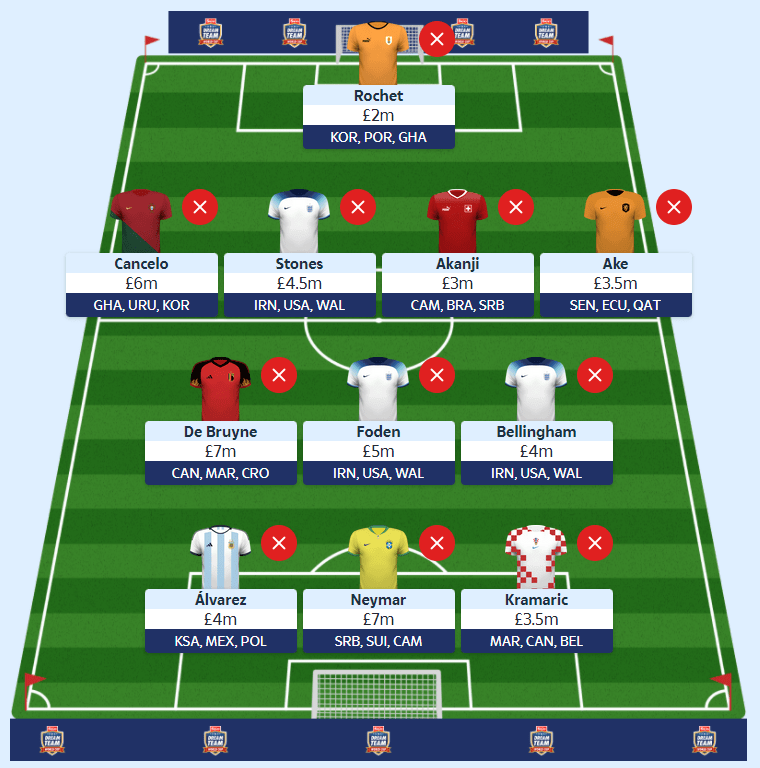 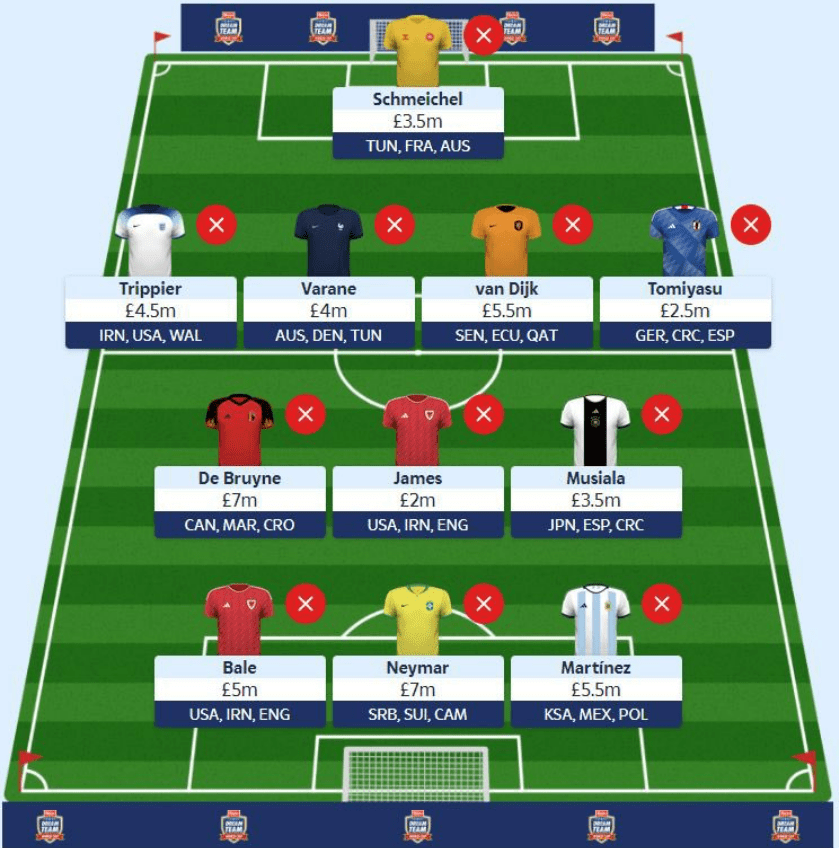 A mix of youth and experience in Vorders’ side – and of course a bit of Welsh flavour too!

Dan James and Gareth Bale the two Dragons picked by Vorderman to do the business in Group B.

Kasper Schmeichel is in goals behind a Premier League back line of Kieran Trippier, Raphael Varane, Virgil van Dijk and Takehiro Tomiyasu.

Change of shape for Alan Brazil who opts for a 4-4-2 – which includes ZERO English players.

Thibaut Courtois is between the sticks with Denzel Dumfries, Pau Torres, Antonio Rudier and Nicolás Tagliafico at the back.

Lionel Messi and Thomas Muller are in attack.

Kalidou Koulibaly, Thiago Silva, Mateo Kovacic and Mason Mount are all in.

Three Lions’ Shaw helps make up a back three, with Federico Valverde and Youri Tielemans the other two in this 3-4-3 formation.

Breel Embolo is in attack alongside Messi and Muller. 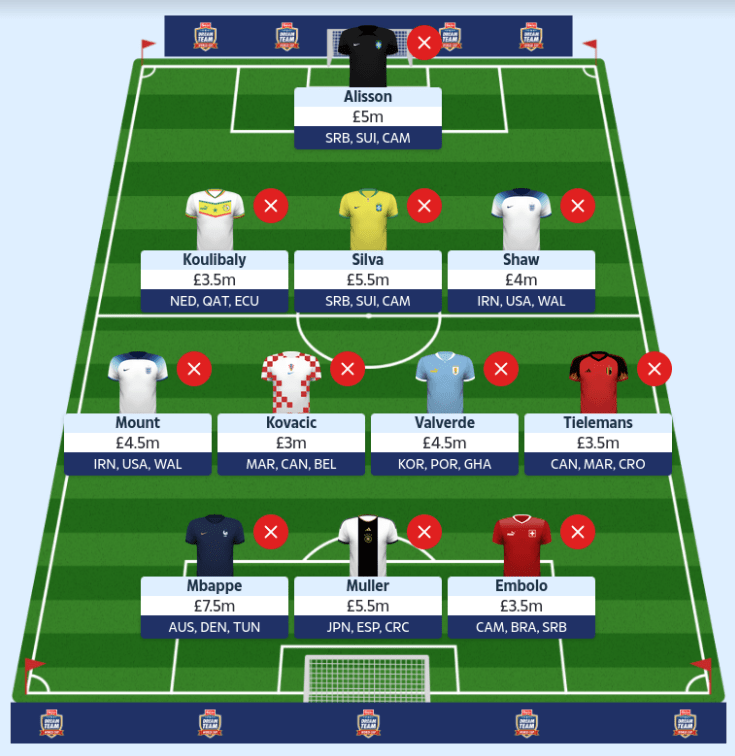 He’s been more ballroom that football in recent weeks, but big Tony Adams still knows his stuff judging by his team selection.

Saliba, Saka and Martinelli make up the Arsenal contingent, while Ederson is the surprise call in goals.

Stones is joined by City teammate Aymeric Laporte in defence, with Andreas Christensen picked too.

Gavi and Gnabry join Saka in the three-man midfield with Neymar and Messi making it a formidable front line.

Not a single Brazilian player makes commentator Sam Matterface’s side.

Uruguayan Sergio Rochet has saved some of the transfer budget in goals, with Benjamin Pavard Christensen and Laporte ahead of him.

Angel di Maria and Sergej Milinković-Savić are joined by Foden and Bellingham in a strong midfield four.

Mitrovic is involved alongside Karim Benzema and Kai Havertz.

Taking on a celebrity is one thing, but an entire radio station!?

Particularly when it’s a very strong side on paper, starting with Schmeichel in goals.

Trippier and Pavard are in defence alongside Ruben Dias and Brighton’s Pervis Estupiñán.

Valverde and Bellingham join Bernardo Silva in a three-man midfield.

Harry Kane is finally picked and joins Alvaro Morata and Gakpo in attack.

EPL: Mbappe in shock move to replace Ronaldo at Man Utd
World Cup’s most iconic haircuts from Ronaldo’s famous trim to Valderrama’s curls recreated at The Sun’s own barbers