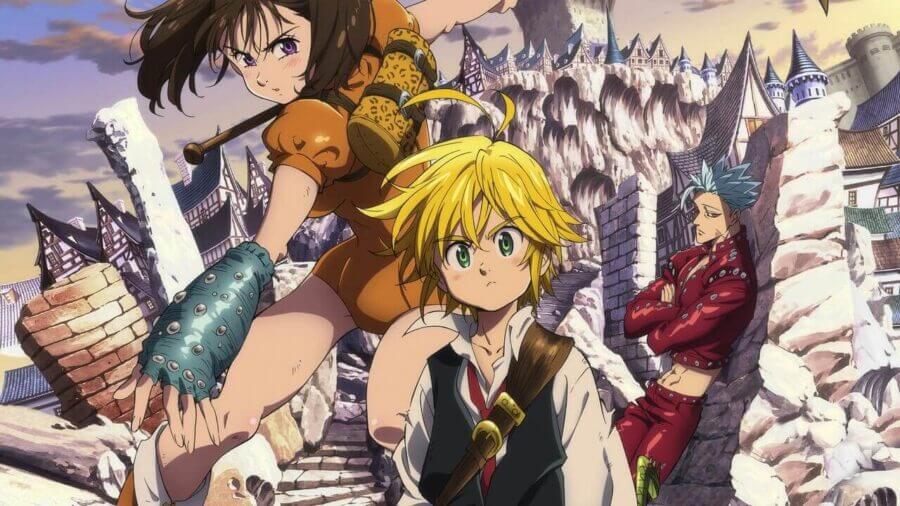 The Seven Deadly Sins is a licensed Netflix Original anime series based on the manga of the same name by author Nakaba Suzuki. Having sold over 37 million copies of the manga worldwide, the franchise has a fiercely loyal fanbase. The studio was previously animated by A-1 Pictures but has since a new home with Studio Deen.

Just like the fourth season, we’d like to address that we’re listing this season as the fifth as we’re following the way Netflix has formatted the Original. We understand that the ‘second season’ was a handful of OVA episodes.

As war rages everywhere from heaven to hell, the Seven Deadly Sins will put their might to the test to save their friends. Here’s your first look at the final arc of Meliodas and crew’s adventures, The Seven Deadly Sins: Dragon’s Judgment! pic.twitter.com/8Y0gwfrOT9

When is The Seven Deadly Sins season 5 coming to Netflix?

The series was originally scheduled to return to the Japanese broadcast in October 2020, but the fifth season has since been delayed due to the COVID-19 Pandemic.

An official statement was released on The Seven Deadly Sins website. A revised release date has finally been announced, and as expected the series will be broadcast in Japan from January 2021.

Ultimately, this means the Netflix release date will be delayed by several months as well as the Japanese broadcast will take place between January and June/July.

Assuming that we could have seen the fifth season arrive in August like the fourth, it’s highly likely that we’ll be waiting until Winter 2021/2022.

What to expect from The Seven Deadly Sins season 5

There’s a lot to unpack as we arrive at what should be the final season of The Seven Deadly Sins.

In August 2020, it was revealed that the new season would be titled “The Seven Deadly Sins: The Judgment of Anger”.

Also in August, the first-ever look at season 5 of The Seven Deadly Sins was revealed.

Attached with the artwork, the news post offered the following synopsis for the next season:

“Meliodas, Elizabeth, Hawk, Dianne, Van, King, Gowther, Merlin, and Escanor are standing against the flames, a mighty enemy, and a visual depicting the members of the Seven Deadly Sins confronting their destiny.”

Season four of the anime concluded at what would is chapter 267 of the manga. The manga has a total of 346 chapters, which leaves only 79 chapters left for the anime to cover.

In that time, there’s still a large amount of story to cover.

As an immortal, Ban is the only member of the Seven Deadly Sins, other than Meliodas, that has a chance of surviving purgatory.

Ban is determined to find the real Melodias we all know and love and to bring him home to Brittonia. But time passes differently in purgatory, just how many decades, centuries or millennia will pass before Ban finds the Meliodas?

Ban is already one of the strongest characters in the series, so spending so many years in purgatory is likely to make him even stronger.

Meanwhile, in Britannia, a new alliance has been formed between that of the Goddess Clan, Fairy Clan, Giant Clan, and the humans, kickstarting a second holy war with the goal of taking down the Demon Clan once and for all.

Estarossa of the Demon Clan has kidnapped Elizabeth, so it’s up to the united forces of the Stigma Alliance to stop him and rescue the princess.

The Love commandment has a horrid past, and soon all will be revealed.

The resurrection of the new Demon King?

The giant egg containing the body of Meliodas continues to manifest, and when it hatches an even stronger, and darker, Meliodas will awaken. With the commandments, he’s absorbed, Meliodas won’t be far away from claiming himself as the new Demon King of the Demon Clan.

Will there be a sixth season of The Seven Deadly Sins?

As we briefly discussed above, there is very little source material left for the manga to cover. With only 79 chapters to go, it wouldn’t be beyond expectation for the anime to finish at five seasons.

That being said, the fourth season only covered roughly 31 chapters of the manga, so, by all means, we could see the anime prolonged to a sixth season to see out the finale.

Fans needn’t worry, there’s tons of story, fights, and plot twists etched into the remaining 79 chapters of The Seven Deadly Sins, so there’s plenty to keep you entertained.

We won’t reveal any spoilers here but a sequel manga is being planned, aptly named The Seven Deadly Sins: The Four Knights of the Apocalypse. So a sixth season may focus on the new story being written by Nakaba Suzuki.

Will the animation be improved for The Seven Deadly Sins season 5?

One of the most debated topics of the fourth season was the significant drop in animation quality.

It’s no secret that the production of The Seven Deadly Sins was moved away from A-1 Pictures to Studio Deen. One of the lesser-known facts was Studio Deen outsourced the animation to the South-Korean animation studio, Marvy Jack.

The results were far from impressive, and highly controversial.

The outcry from fans was extremely strong, but Studio Deen has yet to comment on whether or not they will be handling the full production of season 5.

Are you looking forward to the release of The Seven Deadly Sins season 5 on Netflix?