📆  This is the December 2020 edition of “This Month in WordPress with CodeinWP.”

The end of the year is near and, while all our hopes are heading towards a better 2021, let’s keep an eye on what’s happening in WordPress right now.

In the December 2020 WordPress news edition, a release candidate for WordPress 5.6 is available, the Envato community hits $1 billion in earnings, WordPress.com ditches the Conservative Treehouse, and the block editor drops the widgets and Customizer from its full-site editing interface. 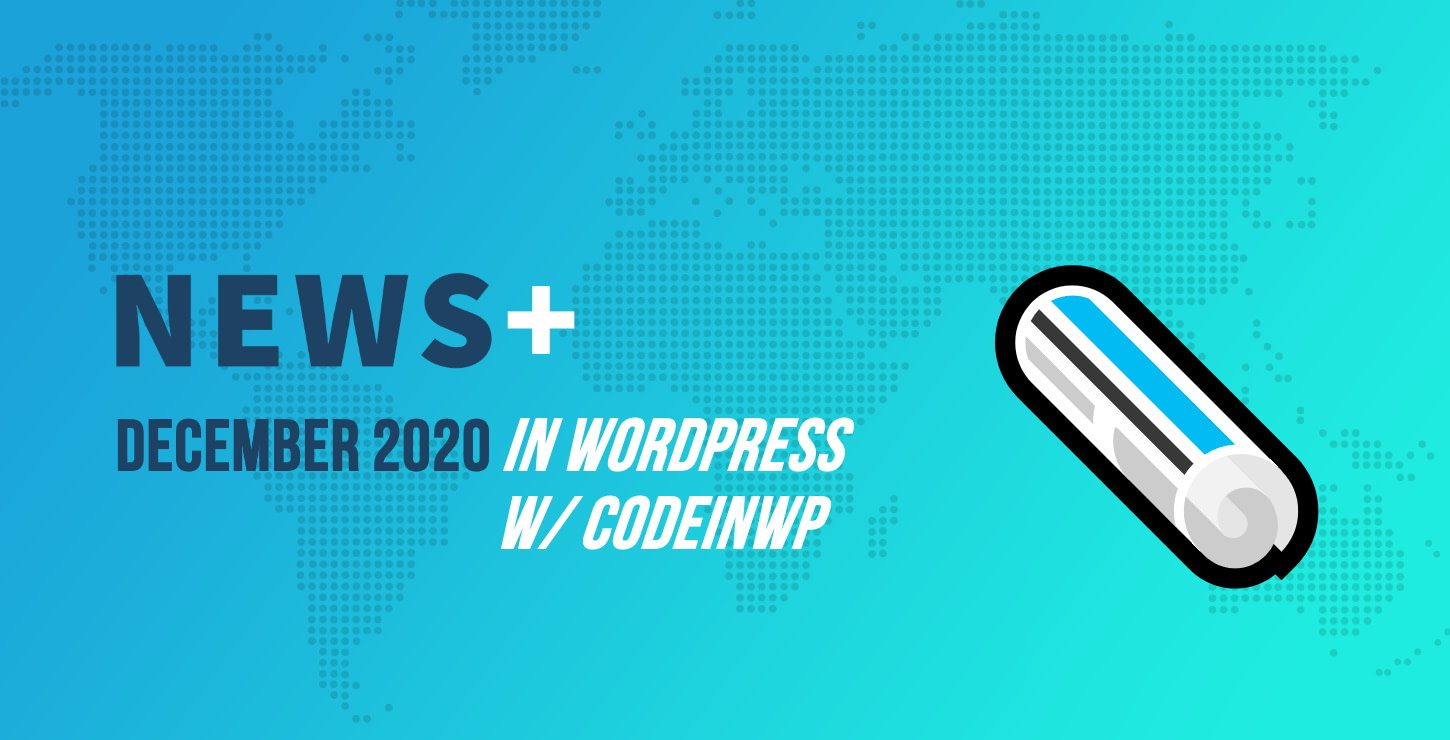 WordPress 5.6 – set to launch on December 8th – will look just like this release candidate (with fewer bugs, eventually). If you’re impatient and want to try it out before it comes out officially, download this latest version. Since this one is not the real thing, you can see it as a test so feel free to report any issues or errors you find.

In last month’s edition of the news, we wrote more about what you should expect from the December release. Apart from what we covered there, WordPress 5.6 will also provide the latest jQuery major update and a dedicated UI for users to be able to enable the core auto-updates (before, the developers were the ones that could allow that, now it’s in the hands of the users).

Another important mention is related to the new default theme. As you probably know already, the next WordPress release brings a new default theme – Twenty Twenty-One. But it will come in two variants: a normal one that comes packed together with WordPress 5.6 and a block-based one, that has been announced to be a separate project (independent of WordPress 5.6).

For a detailed report on each new feature and the full list of enhancements, check this field guide updated by the team responsible for this release. If you’re already wondering what WordPress 5.7 will bring, you can share your own ideas with the devs and maybe you’ll be able to see them implemented next year. 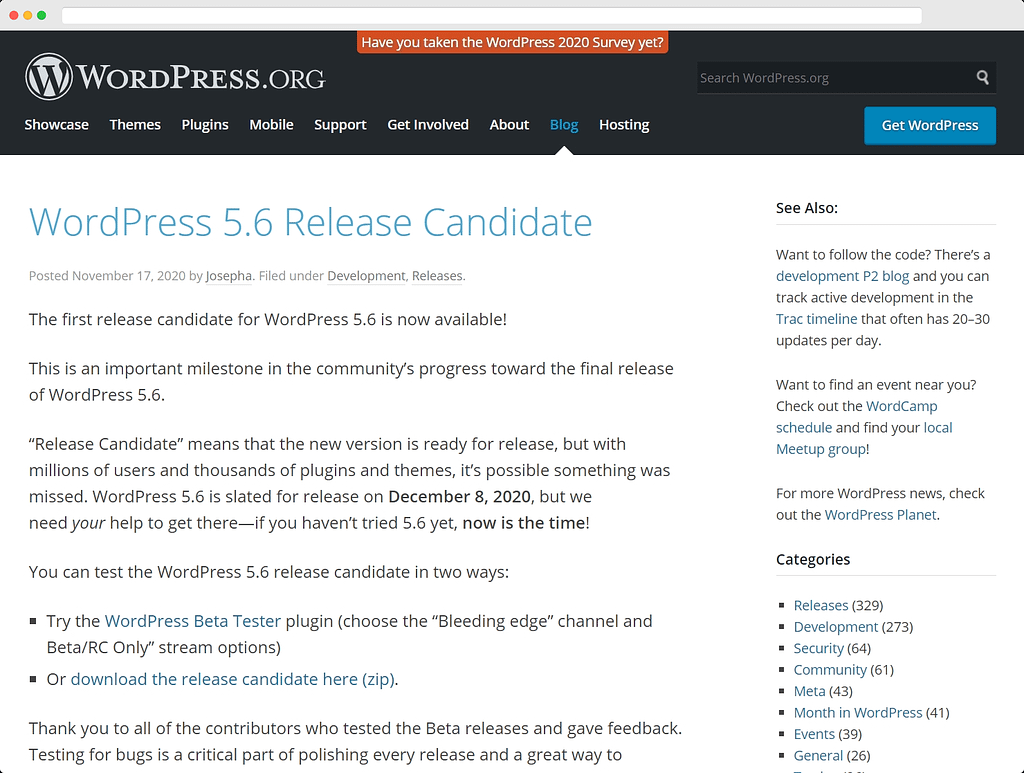 The Conservative Treehouse is an online political newspaper that has been using WordPress.com as a host for 10 years now. But not anymore.

Automattic banned the publication for violating the Terms of Service on prohibited content by inciting violence through their posts. It’s about an article that seeded a conspiracy theory, which Donald Trump shared later on via Twitter. Thus, Mark Bradman, the owner of The Conservative Treehouse site, must migrate to another host by December 2, 2020.

Several reviews of the latest posts of the blog showed that the site is an indisputable source of misinformation, not only on political subjects but on almost everything it claims. The hottest topic is now COVID-19, of course, that they use to spread misleading information. 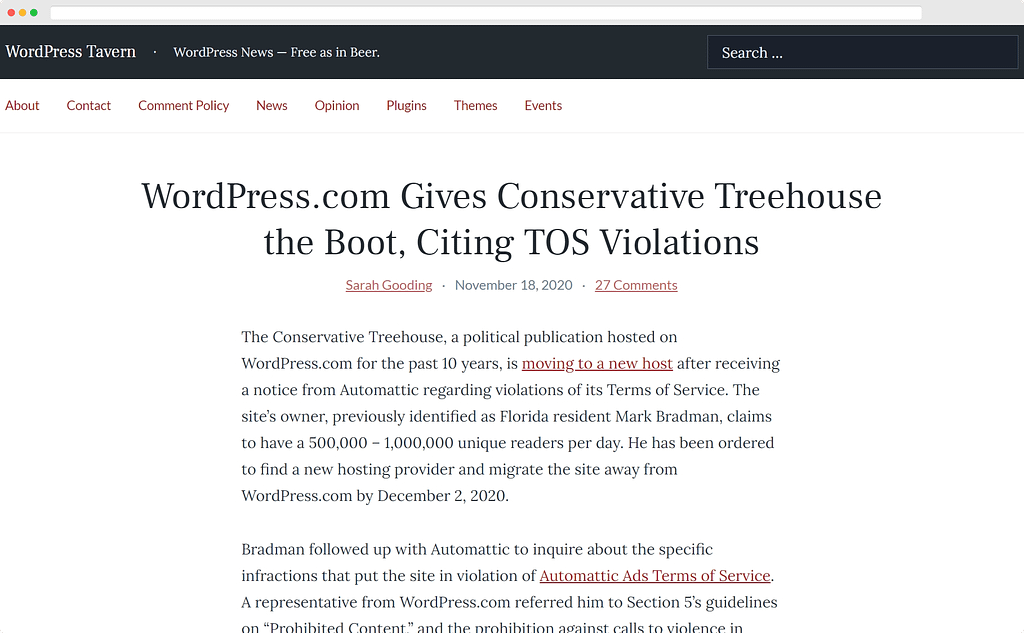 Envato, the popular marketplace for digital products and services, reached the milestone of $1 billion in community earnings since 2006, when the company was founded.

Its huge community of 81,000 members from around the world (product authors and customers alike) contributed to these spectacular earnings that came a year earlier than anticipated. Out of these creators, 88 have earned more than $1 million each.

Collis Ta’eed, the Envato co-founder, wrote about this success after announcing last month that he will embark on a new professional journey and will pass his CEO attributions on to Hichame Assi, the former HotelsCombined.com CEO.

Disable customizer and widgets from FSE

Gutenberg continues to grow, seeing new features and enhancements every month. But the last updates are of higher importance because they bring to the table some changes that will leave a footprint on what WordPress will look like in the near future.

Despite not coming with anything revolutionary in terms of design or core functions, Gutenberg 9.3 hides the Widgets and Customizer sections from your WordPress admin menu when you go into full-site editing (FSE) mode. Which is a huge step in the transition to blocks.

The core team said that the widgets are useless since FSE themes do not have widget areas. The same applies to the Customizer, whose capabilities are similar to what you’ll find in the Site Editor.

The FSE enables automatically when you activate an FSE theme, such as Q (we talked about it in November), Twenty Twenty-One Blocks, or Seedlet.

In this discussion on GitHub, you can find answers to whatever questions you might have on this topic and how the dashboard will look when you enable the full-site editing.

Meanwhile, Gutenberg 9.4 is also out with small improvements: width selector for the button block and custom typography for the list block.

Discussion: align the WordPress release cycle with the industry standard

Wordfest – The festival of WordPress

WordPress Automatic Updates: How to Get the Most Out of Them

WordPress Powered Almost Every Contest in the US Elections

That sums up our December 2020 WordPress news roundup. Anything we missed?

Layout and presentation by Karol K and Adelina Tuca.