When to Send Emails for Best Results? Here’s What the Data Says

When to send emails? What is the best day and the best time? I’d love to tell you it’s 11am on Tuesdays, but the truth is, it depends on your audience.

Urgh… the word that makes every marketer sigh — depends. Sure, in an ideal world you could email your list at 11am on Tuesdays and get a 100% open rate. But people aren’t robots. People are nuanced, work in different industries, use different devices, and have different day-to-day schedules.

That being said, there is some general data-based research you can follow on when to send emails to help increase your open rates. For instance:

If you have an email list with more than 2,000 subscribers, that generalized data isn’t going to cut it. You need data that’s focused on your audience that tells you the best days and times to send emails when they are more likely to be in their inbox. 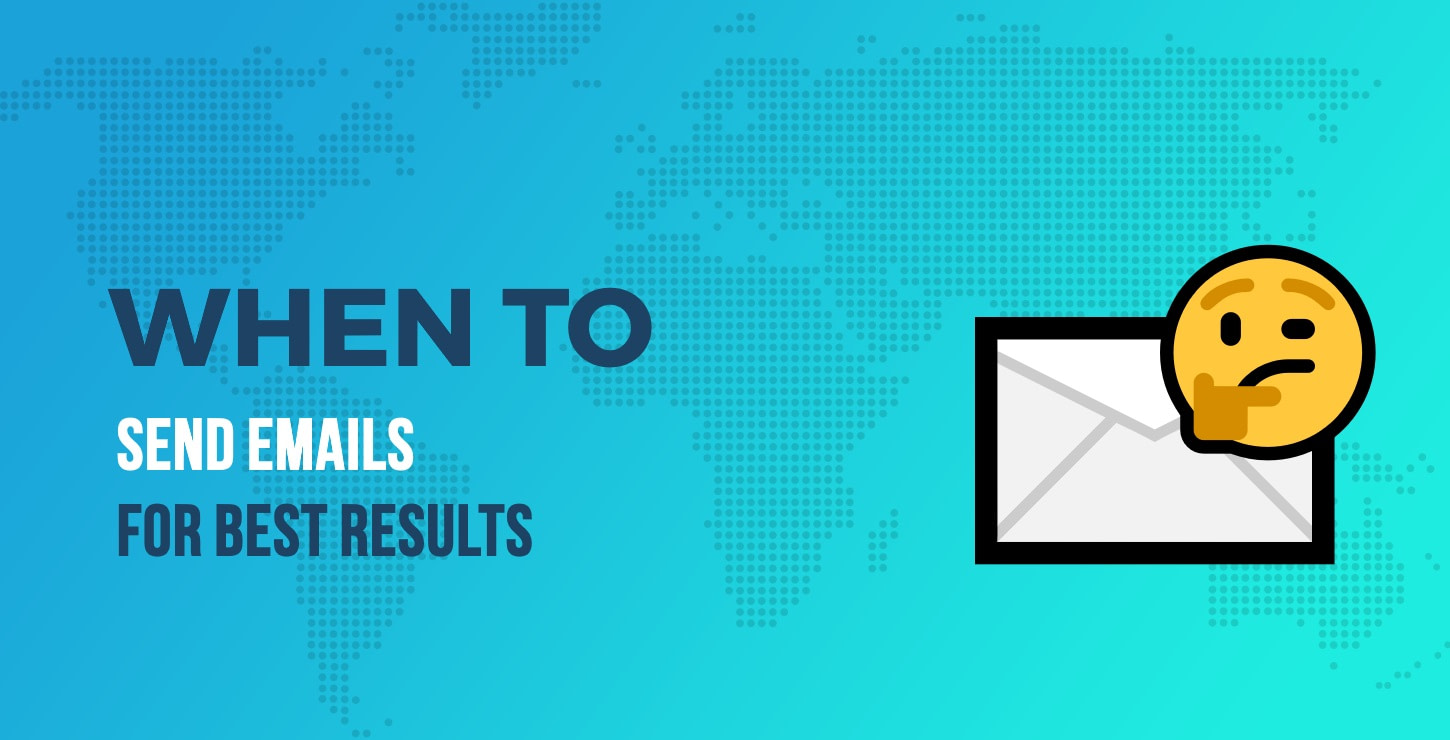 So in this guide, I’m going to walk you through the latest research into when to send emails:

📆 When to send emails: the best day

Do you want to hit inboxes on Monday morning to get to subscribers before they get bogged down with work? Or maybe on Wednesday when your tech email newsletter is ready to roll? Or perhaps on Friday afternoon while they are wrapping up for the week, already distracted with thoughts of their weekend plans (and, perhaps, weekend purchases)?

Trying to figure when to send emails can get overwhelming because there’s a ton of data out there.

CoSchedule, for instance, looked at 14 different email studies and found the best average day to send an email is Tuesday, with Wednesday and Thursday coming in second and third.

In another study, Experian ranks Tuesday as the best day to send email. It is a bit old (the study was completed in 2013), but the results mirror several other studies on when to send emails.

Mailchimp has also found that Tuesday is the best day to send emails, with Thursday coming in second place.

Wordstream, meanwhile, found the best time for them was Thursdays between 8am and 9am.

Propeller found that “normal people” (aka, those who work 8am-5pm jobs) are most likely to open emails sent on Wednesday or Thursday.

According to SendinBlue, Thursdays earn the highest open volume, but Tuesdays and Wednesdays earn a higher rate of click-throughs.

The verdict on the best day to send email 📆

🏗️ The best times to send email by industry

According to Hubspot, the best time to send an email, on average, is 11am — but there is a problem. Different industries have different audiences, with different email habits that impact when to send emails.

For example, your audience might read an email from CNN in the morning before work to catch up on the news. But, they may be more likely to click on a message about a new travel backpack at 3pm during the after-lunch slump.

So, what time works best for your industry? I dug a bit deeper and looked at more specific data for particular industries.

According to Mailchimp’s data, the best time to send emails are in the morning, but the exact time varies by industry.

Mailchimp also notes that hobby-related emails see an increase in open rates after work hours, but the most significant peak is between 7 – 8:30am.

SendinBlue reports the best time to send emails varies between mornings and afternoons, with splits for SaaS and offline retail, in particular, regarding when to send emails. 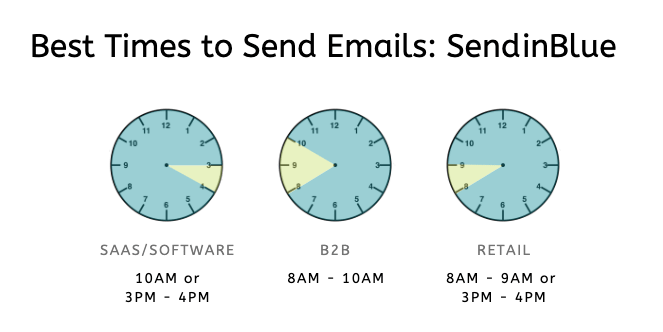 SendinBlue’s data also notes that click-through rates spike between 3 and 4pm, so if you want recipients to click your links, the afternoon may be the most effective time when to send emails for these industries.

Springbot research has found the best time to send ecommerce emails is between 6am and 8am or between 8pm to midnight. This makes sense, as these times are usually either before work or after, when people are not at the office.

The verdict on the best time to send email by industry 🏗️

On average, the best time to send emails is between 10am and 11am. However, there is a peak in click-through rates between 3pm and 4pm as people check their emails after lunch and before heading home for the day. If you are sending e-commerce emails, try testing times when to send email early in the morning or late at night to see what works best for your audience.

To choose the best time when to send emails, you should take into account your industry and your audience’s email habits.

🐣 The best time to send emails by audience age

The age of your audience can significantly impact their email habits. For example, college age subscribers might not check their email first thing in the morning. If you send your messages in the standard 10:00am time slot, your message will be buried by the time they get around to checking their email.

Likewise, older subscribers don’t tend to check their emails as early as people in their forties.

Mailchimp reported the best times when to send emails based on your audience’s age is:

Unfortunately, there is limited data about how age impacts email open rates, but it is definitely worth considering if your audience is primarily younger.

Younger subscribers tend to check their emails later in the day, but on average the best time to send emails is still between 10am and 11am.

Unless your audience is almost exclusively college-age students, look at other factors such as goal or industry instead of age to determine the best time when to send emails.

🥅 The best times to send emails based on your goal

We’ve already looked at how your industry and your audience’s age can impact the most effective times when to send emails. However, there is one more factor to keep in mind when choosing the best email time — your goals. What action do you want your subscribers to take when they get your email?

Think about your own email habits. If you check your email first thing in the morning while lying in bed, you might not be likely to make an impulse purchase. But what about after lunch while trying to avoid work? That new pair of shoes looks a bit more tempting, right?

High click-through rates are important for publications, brands looking to drive traffic to blog posts, and other informational emails. So, what is the best time when to send emails if you want to drive clicks?

According to Experian 8pm to midnight will get you the highest CTR, but noon to 4 pm comes in second.

Convince and Convert reports that 10am on Saturday earns the highest click-through rates for entrepreneurs, but 10am on Tuesday earns the most clicks for B2B businesses. In essence:

So, the day and industry may matter as well as the time when it comes to increasing your click-through rates.

The best times for sales

What if your email campaign is aimed at increasing sales? Here is what you need to know about when to send emails for sales or commerce.

Experian reports the 8pm to midnight time slot earns the highest transaction rates. This makes sense, as it is when most people are home and relaxing after a long day – and more likely to be scrolling through their emails and social accounts.

They may be more likely to make purchases on impulse, or might be completing online purchases they researched earlier in the day.

The best times if you want a response

According to Convince and Convert, the best time to send an email if you want a response is either 6am or 7pm.

These slots target people either right before work or after dinner, when they are more likely to have time to write and send a response.

For more on getting responses, check out our 5 email scripts to crank out the perfect follow up email to an unresponsive client.

The verdict on when to send emails based on your goal 🥅

The best time for sales and click-through rates is 8pm to midnight. For a response, aim for 6am or after work at 7pm. However, industry may have a more significant impact than goal on the most effective times for when to send emails.

👪 Consider your audience when choosing when to send your emails

There is no one right answer here, which can be frustrating when you are trying to develop an email marketing strategy around when to send emails. But here’s the thing: if every business sent their emails at the same time, it would quickly become the worse time to send emails!

There are so many factors that can impact email effectiveness. Your goals, your industry, and your audience demographics can all impact the most effective times to reach your audience.

Here are a few reasons why it matters when to send emails:

So, how do you figure out when to send your emails?

Start by looking at who your audience (and your marketing personas, if you’ve developed some) is and think about what a typical day in their lives looks like. For example:

Above all — test! The data above should be used as a starting point for you to choose testing times when to send emails. Choose the best two or three days and times, then split test to see which time performs best.

Keep in mind that the “best” times throughout this article are based on the recipient’s own time zone, so be sure to adjust your email campaigns accordingly. Most email platforms will adjust send times based on time zones for easy email automation, like Mailchimp’s Timewarp feature.

♻️ Not getting the open rates you want? It’s time to optimize your emails

If your open rate is still flat-lining and you’ve tried following the general day and time guidelines in this post and you’ve tried sending based on research into your own data, it’s time to have a good, hard look at your email campaigns.

Campaign Monitor suggests there are four key considerations to keep in mind when to send emails before you hit “Send”:

📈 Analyze your audience data for when to send emails

There is no one right time when to send emails. There are too many factors that impact email marketing effectiveness to say one time is the “best” across the board. In addition, there will always be some email lists that simply don’t perform the same as most others generally.

Your best bet is to consider your audience, your industry, and your goals. The data in this post should give you a good grounding for where to start, and you can build on this data by digging into your analytics and A/B testing your emails.

Finally, don’t be afraid to test times outside of the “best times” — you might be surprised by when your audience is most responsive.

What do you think is the best day and time to send emails? What has worked for you? Share your thoughts in the comments below!

The Behind the Scenes as a #WCEU Media Partner: What’s the Experience Like?