0
This is the July 2018 edition of “This Month in WordPress with CodeinWP.”

If you’re tapped into the WordPress community, you know that June included a major event – WordCamp Europe 2018.

For our team, WordCamp Europe has been a major focus over the last few months. As official media partners, we were involved in organizing and volunteering on behalf of our theme shop, ThemeIsle. Long story short, it was pretty busy before and during the conference!

Since WordCamp Europe was the biggest news from the past month, we decided to make our July news round-up entirely about WCEU. What are you going to read next? The highlights from Matt Mullenweg’s talk, Contributor Day wrap-up, the takeaways of the popular Gutenberg workshop, the name of the city that will host WCEU 2019… and last but not least, people’s stories about their stays in Belgrade.

Whether you missed the event or just want to relive happy memories, this roundup should be a fun one! 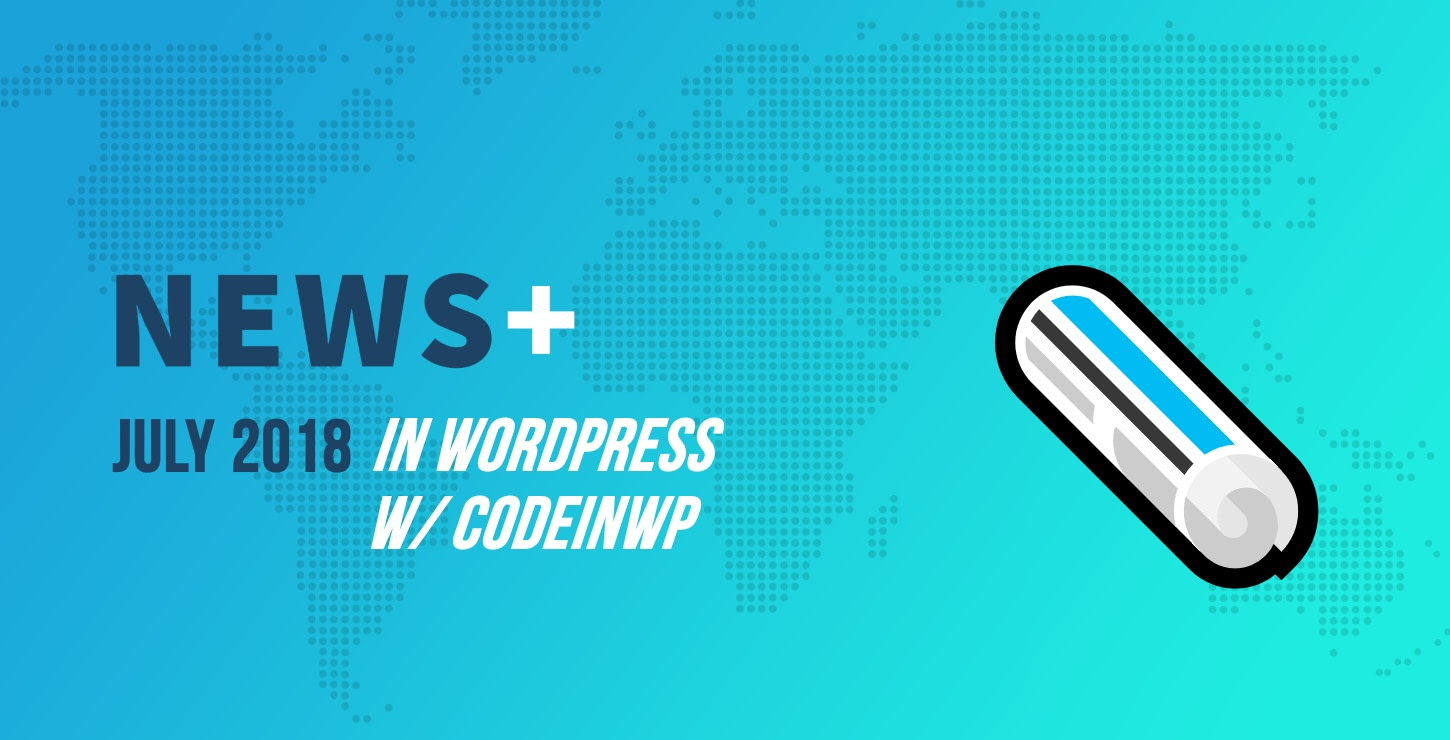 Let’s start with Matt’s speech, as it was probably the most anticipated event for WCEU attendees. Milky Way hall was impressive: it was so large that it let everyone fit in with space to spare. In previous years, people were hurrying to find spots in the main room, while the less fortunate ones had to be happy with watching the live streaming from a secondary room. But it wasn’t the case this year.

So, back to the speech… it was (almost) all about Gutenberg: 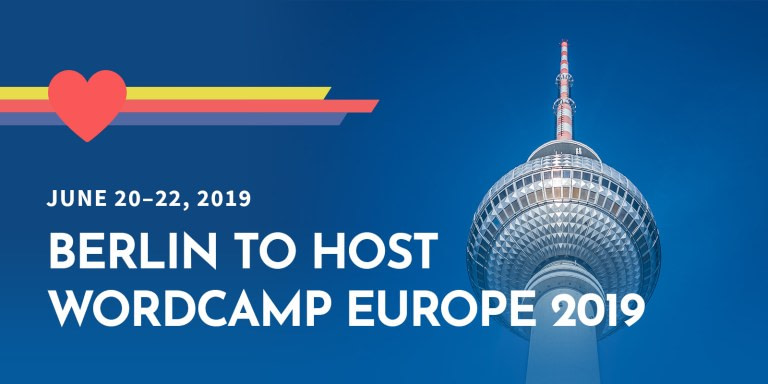 Wondering where WordCamp Europe will be next year? Wonder no more!

WordCamp Europe 2019 will take place in Berlin, Germany. We even know the venue, which will be Estrel Hotel and Congress Center. The hotel is one of the biggest in Europe, and its integrated conference center can host up to 12,000 people. So we’ll be able to attend Matt’s speech all at the same time again, without worrying about being left out.

But the biggest joy must come from the next statement: WCEU official events – Contributor Day, both days of the conference, and the After Party – will be happening in the same venue! So we’re starting off on the right foot already.

Gutenberg remained one of the most frequent words during the conference. Its dedicated workshop had the most submissions and was quite popular with WordPress-ers. The Gutenberg aficionados spent three hours together, talking and doing experiments.

The workshop was led by the core team in charge of this project, which was accompanied by users and developers who wanted to learn more about this topic. Before getting into specifics, there was a Q&A session at the beginning, from which we found out that Gutenberg is close to its final form (it will land in version 3.3). Editor’s design, block creation, ways of customization, extending the new interface, and how the theme building will be affected by the new rules were also discussed in detail at the Gutenberg-ers meeting. 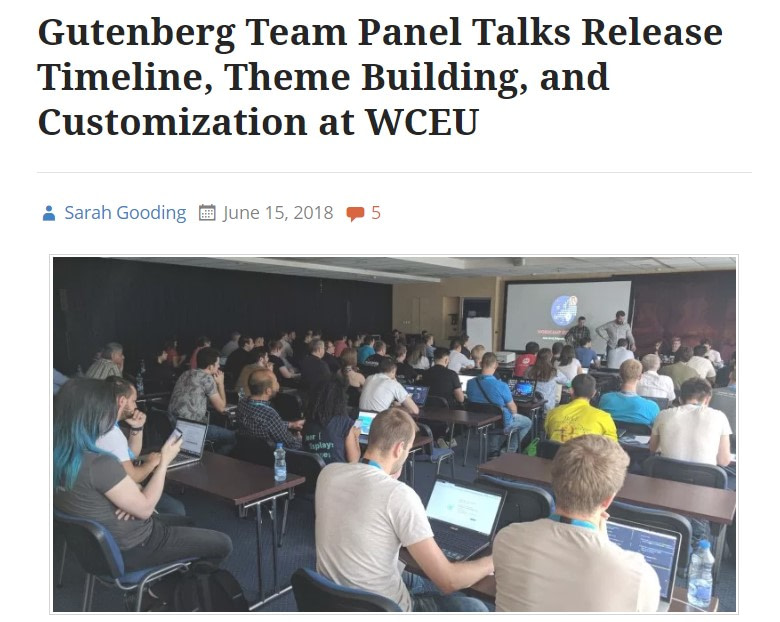 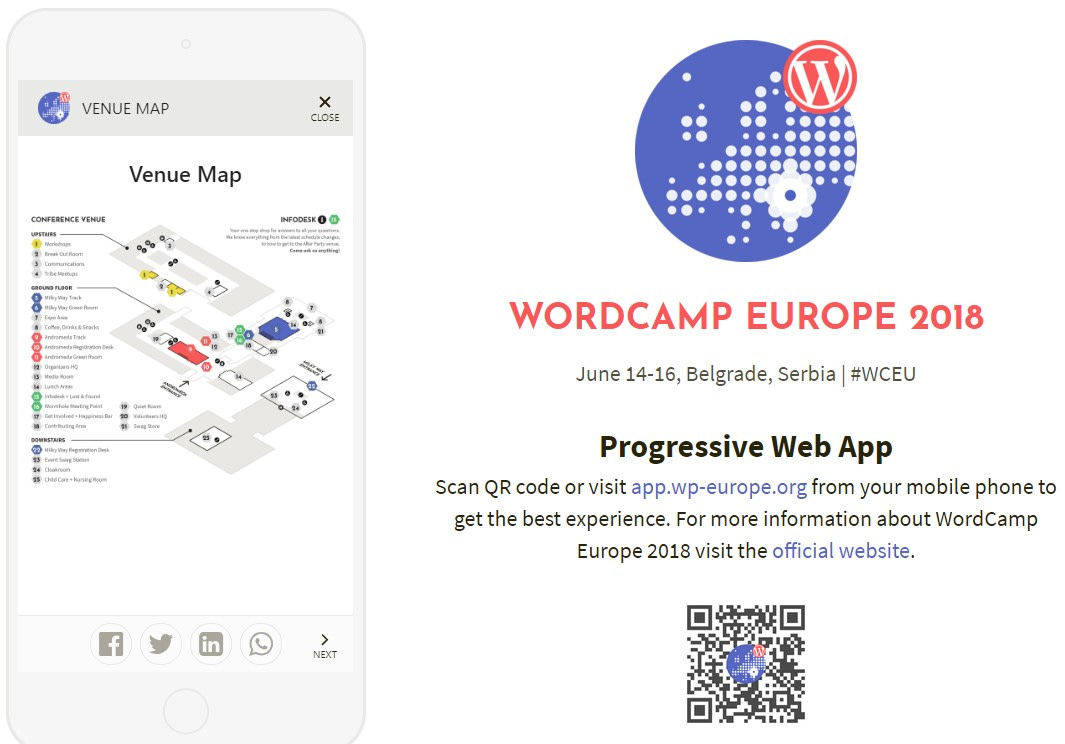 Apart from the workshops, another premiere took place this year: WordCamp Europe now has an official mobile app. So if you’re not a fan of the old-school method of carrying a physical map and a booklet with you all the time, you can install the app to have everything stored in one single place (aka your phone screen).

Cool, huh? Not only does it show the map and daily schedule, it also keeps you updated with the latest announcements from the official WordCamp website. If there are sessions that you don’t want to miss, you can mark them as favorites, so you can access them quickly and keep your own schedule in check. And the food menu… the food menu is also displayed by the app!

Moreover, you don’t have to look at your phone every minute because you can activate push notifications. The site can be accessed offline too if the internet fails you when you need it most (!).
WordCamp Europe 2018 Contributor Day Posts Record Turnout Amid Wi-Fi Outage

During the first part of the Contributor Day, the wi-fi barely worked and people couldn’t contribute much. At least to WordPress because we had the chance to connect with each other and talk. Which I wouldn’t necessarily call it a failure since the main goal of this type of event is to socialize and meet people.

So, despite this imperfection, everyone had fun anyway. And it is even more awesome when you think that WCEU 2018 registered a record with respect to the number of people that went to the Contributor Day: 529 attendees spread in 24 teams.

So yeah, Contributor Day was a success despite the lack of digital connectivity. 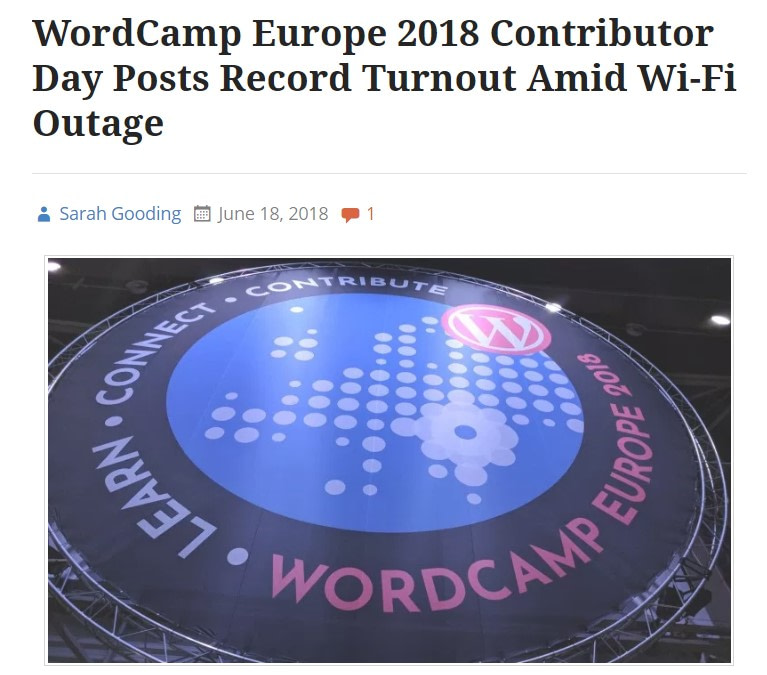 WordCamp Europe 2018: What People Are Saying + Our Reflections and Lessons Learned

Like I said earlier, our team was fully committed to WCEU, hence we had a lot of aspects to write about. Which we did, on our Themeisle blog. And it’s not only our own experience that we talked about, but we also summarized each day of the conference and collected interesting quotes, tweets, and pictures from all around the venue.

Thorsten Frommen from Human Made was also in Belgrade and wrote a very detailed review afterwards. His takeaway covers everything, from the trains and flights that brought him to Serbia to the World Cup experience and the legendary after party. Thorsten made sure he didn’t forget even the smallest aspects of his WCEU adventure. Great read!

It’s always nice to read others’ reviews because it’s only then when you understand how different we are and how we can get excited about different things. The guys from Artbees had a lot of fun too, and this fun resulted in a nice write-up. See WordCamp Europe 2018 through their eyes.

But now let’s see what an organizer has to say about the whole experience. Tess is part of the WCEU PR team, whom I kept in touch with on a regular basis following our media partnership. It’s always interesting to hear what the people from the “inside” say about their work and their challenges along the road. WordCamp Event 2018 in Serbia Belgrade

Persist Agency was also there and kept things professional. Their approach in this post mostly relates to the sessions they assisted, for which they wrote summaries (with bullet points). The post features Maja Benke, Joost de Valk, Marieke van de Rakt, Sherry Walling, Karim Marucchi, and stats about this WCEU edition.

Why We Attend WordCamps (and You Should Too)

The guys at SiteGround think WordCamps are fun. If you were there, then you certainly remember their sponsor booth (and you probably took a photo with their improvised car or/and signed up for their popular contest). But here’s more of what they lived in Belgrade a couple of weeks ago.

WordPress keeps inspiring people. Valentin Vesa from Sucuri lived such a story himself in an Uber after WordCamp. The coincidence was that the driver was interested in WordPress and in launching a website for a living. From there, a long and engaging discussion arose, both from the driver’s will to learn more and Vesa’s desire to help. Matt shared this Twitter post on his own blog.

WordCamp Europe 2018 in Belgrade – A Photo Report by Florian Ziegler

But let’s go through some professional shots taken by Florian Ziegler, who never misses the opportunity to immortalize beautiful moments from WordCamps. The shots come in artistic black and white tones and showcase the beautiful people of WordPress.
What follows next are three videos filmed and edited by WordCamp fellows, who chose to put their memories into moving pictures. [VIDEO] What I learned about the WordPress Community: A Pleskian’s first WordCamp Europe

First is Plesk’s, where Debbie shares nice footage of her taking part in various WordCamp activities. Debbie went to WCEU for the first time, so she must have been really excited (as seen in the video).

The guys from Freemius also made a beautiful video, with funny music in the background, showing short slices of their flight, airports, Belgrade, WordCamp venue, people, speakers, the parties. It kind of includes everything.

And this is the official WordCamp Aftermovie, created by the organizing team. It’s the same one that was projected on the big screen at the after party, right before the spectacular band conquered the stage and the WordPress-ers completely.

#WCEU WordCamp Europe 2018 ... what went down? - July 2018 #WordPress news w/ CodeinWP Click To Tweet Don’t forget to join our crash course on speeding up your WordPress site. With some simple fixes, you can reduce your loading time by even 50-80%: