Listen up, soldier. Warsaw — a challenging turn-based RPG set in the streets of a besieged city in the closing months of World War II — is coming to PlayStation 4 on September 29.

Watch the new announcement trailer to see what we’re up against! 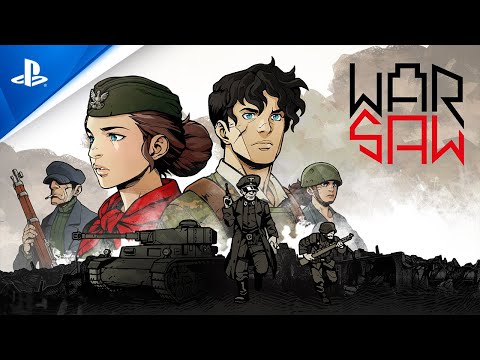 I’m here to prepare you to lead a squad in the Uprising. So focus, because we’re fighting for the lives and freedom of everyone in this city.

I’m not gonna lie to you. We’re outgunned and outnumbered. The city will be cut-off, and we’ll be trapped inside with overwhelming Nazi forces. They will have machine guns, flamethrowers, hunting dogs, tanks and AA artillery.

Us? We have pistols, bandages, and whatever we can salvage. 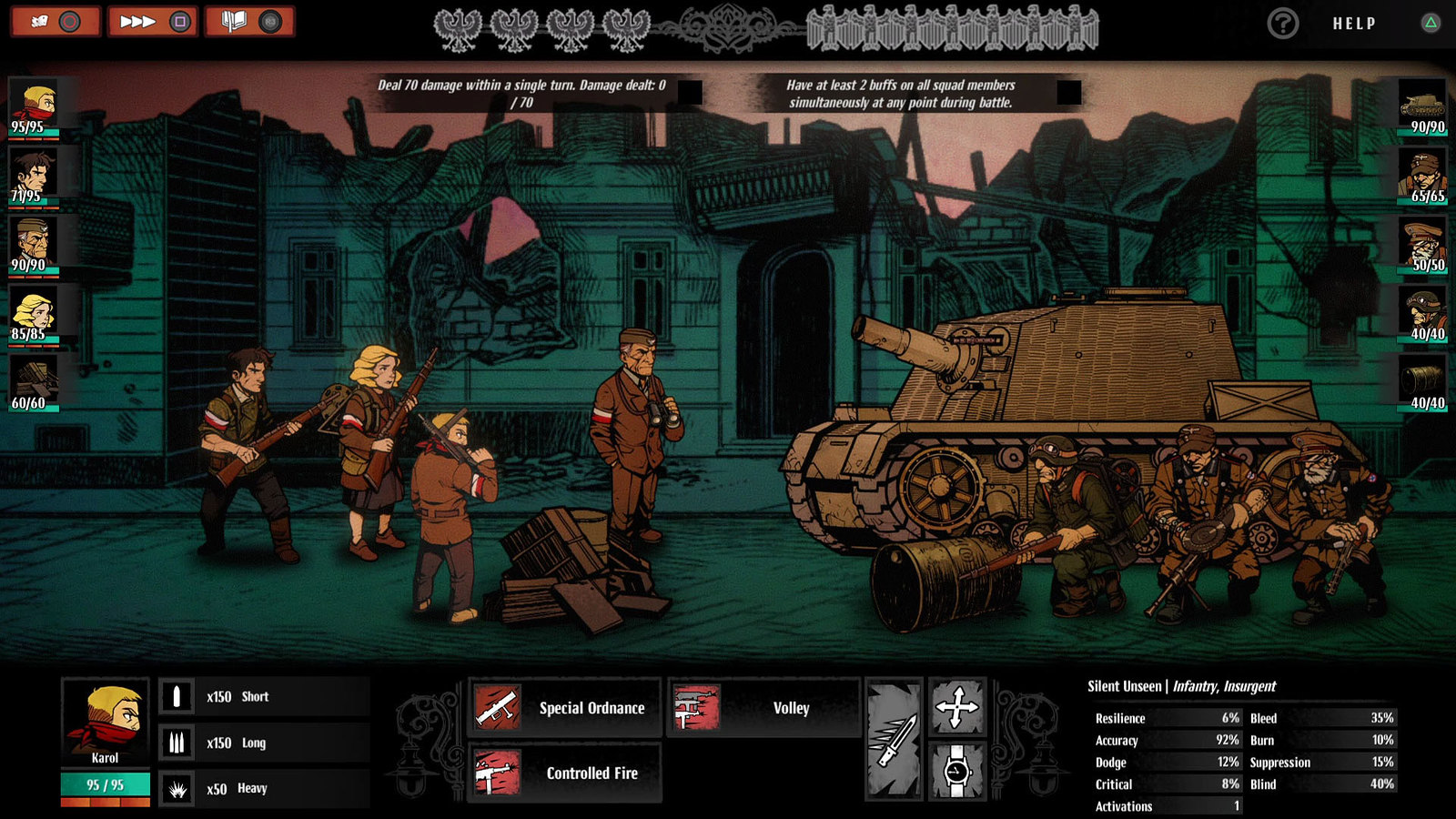 But! We have something they don’t. We have a reason to be here. We have the will to fight for every building, every square inch of every street. This is our home and every one of us will give their life for it. This is our city, and we’ll sooner die fighting for it than let them have it.

Deciding the fate of the city, one district at a time

I need you to understand one thing. There’s only so many of us and so much we can do. We’re spread too thin, and there’s no way to cover the whole city. Each time you go out on a mission you’ll have to carefully choose which district you help with your forces. 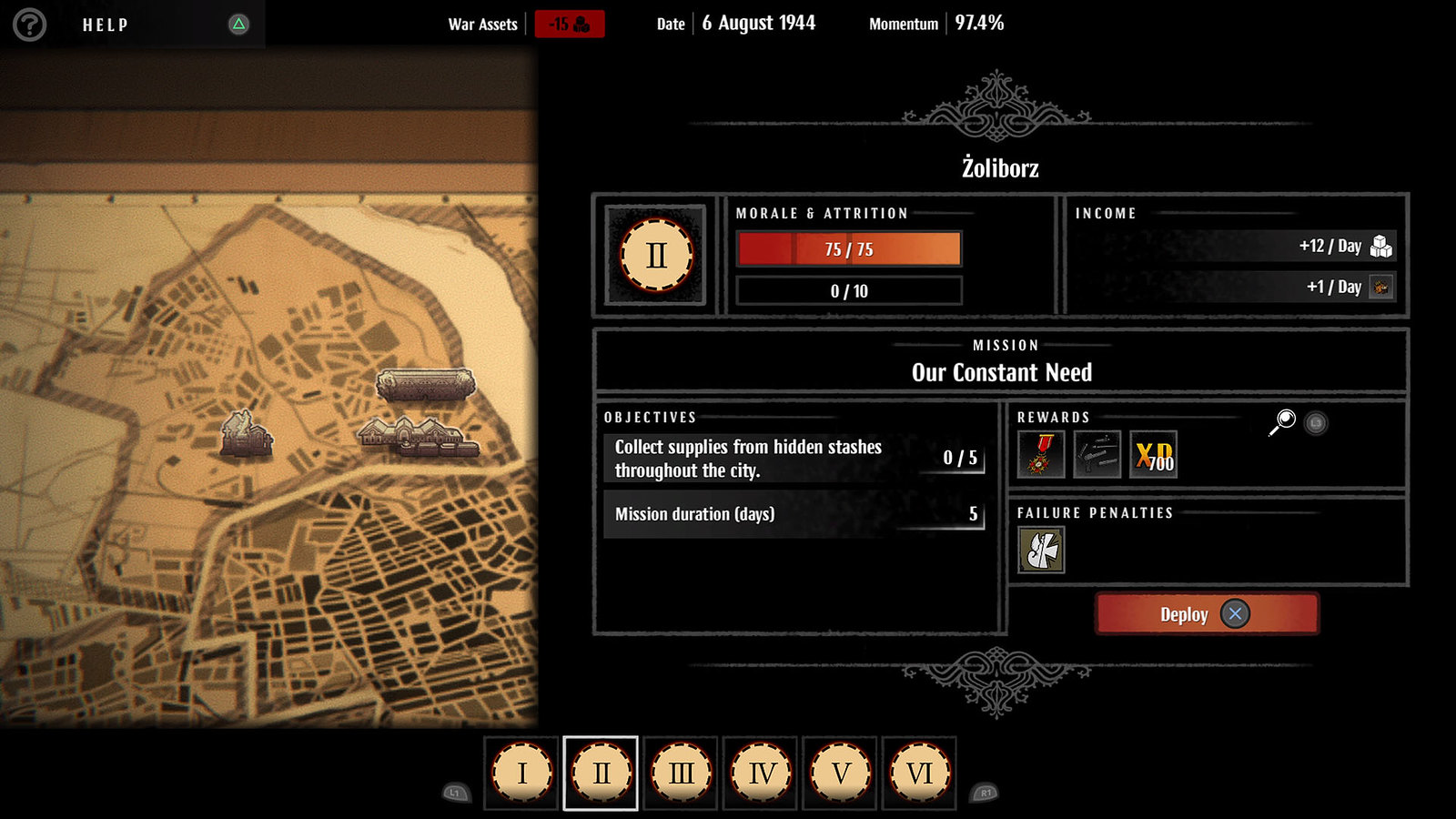 The ones that didn’t get picked? Well, it’s gonna get tougher there. Less resources, less morale, less support for the Uprising. So be sure to choose wisely and give it your best.

Heroes of the uprising

I’m sure you’re already wondering who will be your comrades in this fight. What battle-hardened, elite soldiers will join your team in this fight to secure our future? Well, they may not be the most experienced warriors, but they sure as hell are the bravest people I’ve ever met.

Your squadmates will be the people of this town who had the courage to stand up and fight. Some of them have military background, sure. But most of them are just normal people caught up in this mess. They were waitresses, postmen, telecommunications workers. One guy stationed in Praga used to be the bartender at my favourite place. 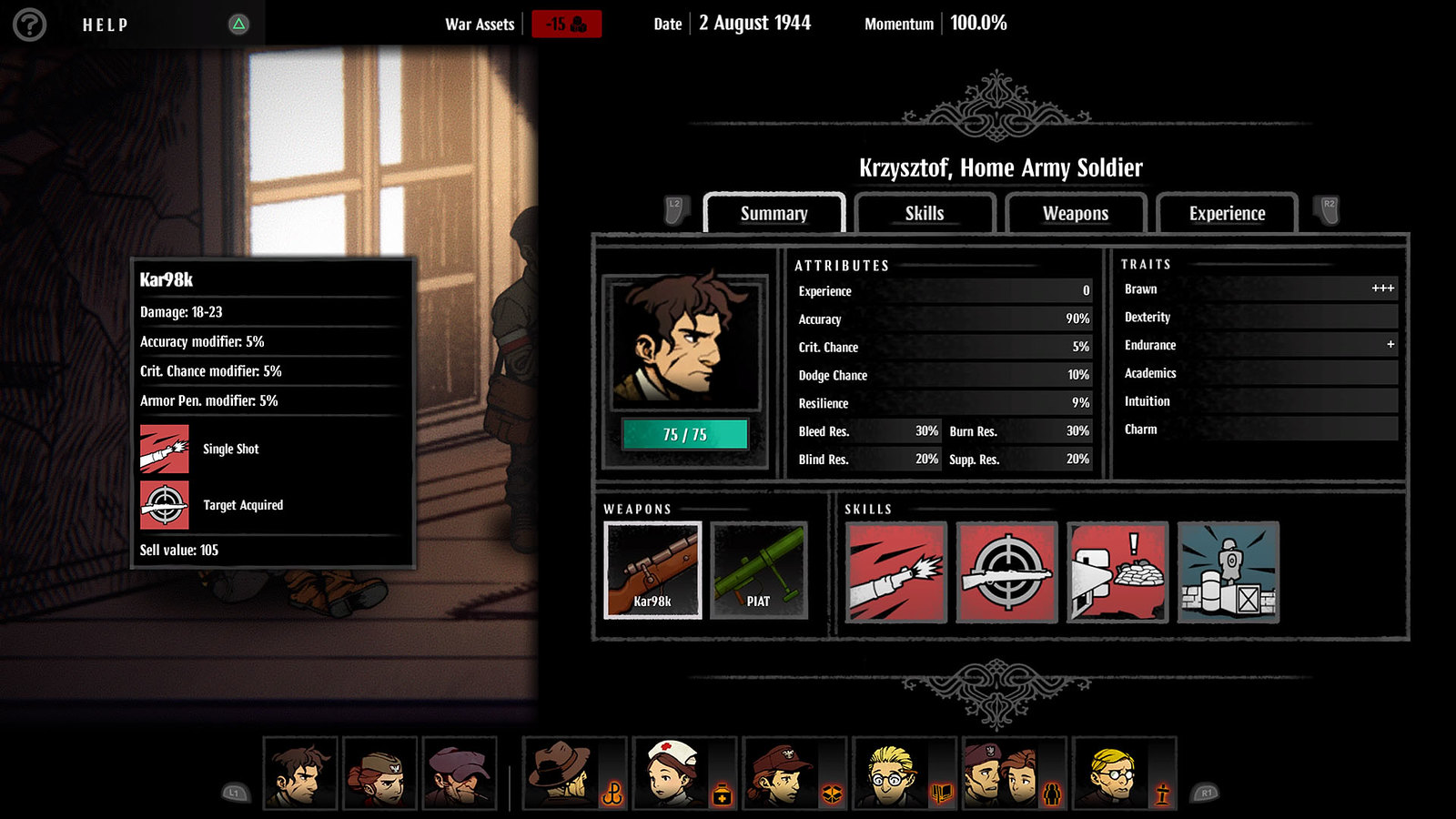 They bring what they can to the fight. Each has their own strengths, skills and abilities that you’ll need to use carefully to maximise their impact.

And they all have their stories. Be sure to listen sometimes, you might learn a thing or two.

Patrolling the streets of the city you’ll no doubt come across civilians in distress. Remember – it’s them we’re fighting for. The families, the children, the old. You need to help them any way you can. Every encounter will be different. Some will ask you for advice or guidance, and some will no doubt need you to rescue them from certain death. 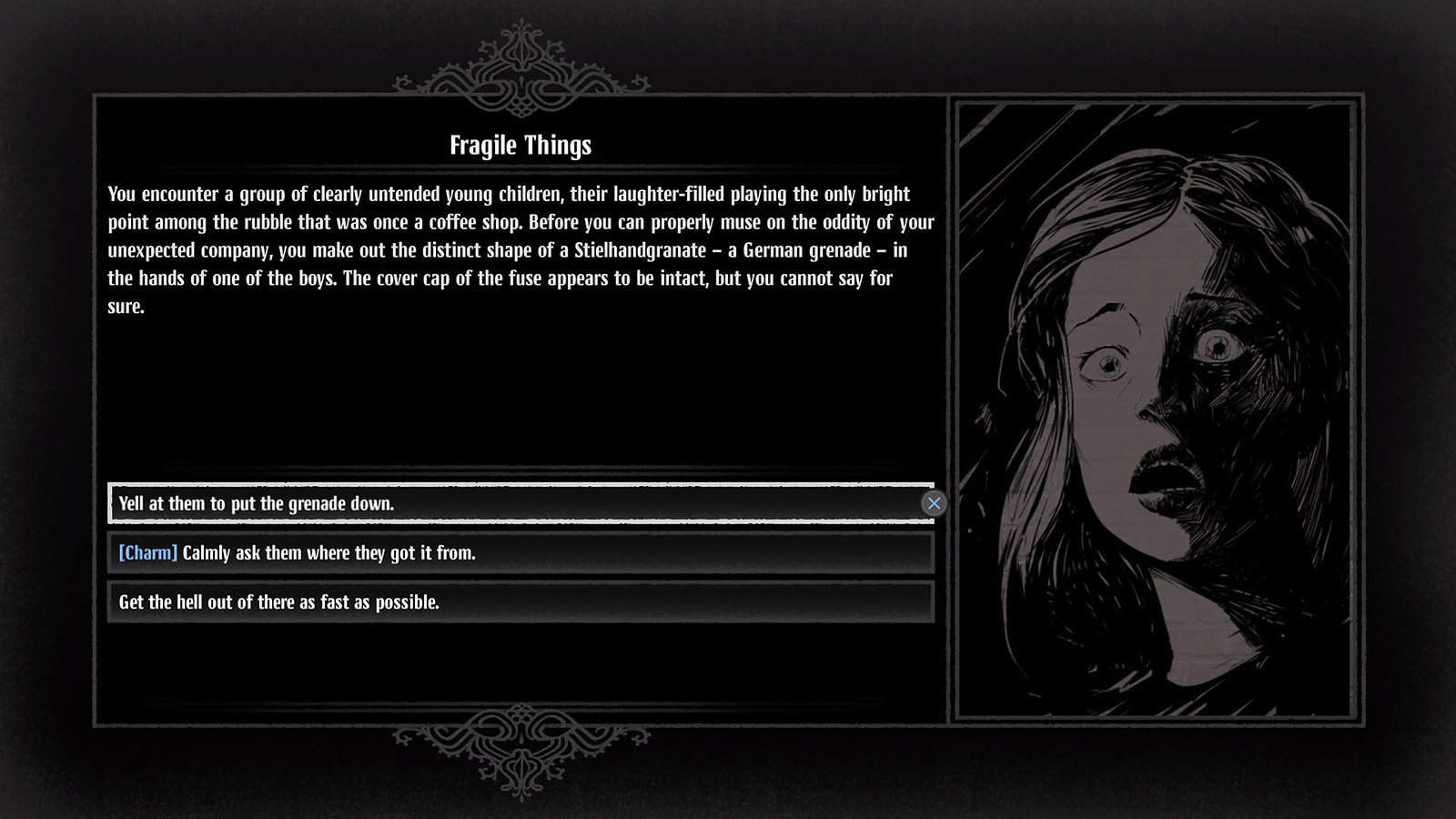 You’ll witness firsthand the realities of war that they have to suffer. Life in a city under siege is nothing to be taken lightly. It can be cruel, unforgiving and brutal. Make sure you do what you can to ease their burden.

Every battle won will let you equip your soldiers with better equipment or gather resources necessary to repair or barter for guns. If you’re lucky, you might come across a supply crate dropped from an allied plane that somehow got past the AA batteries. 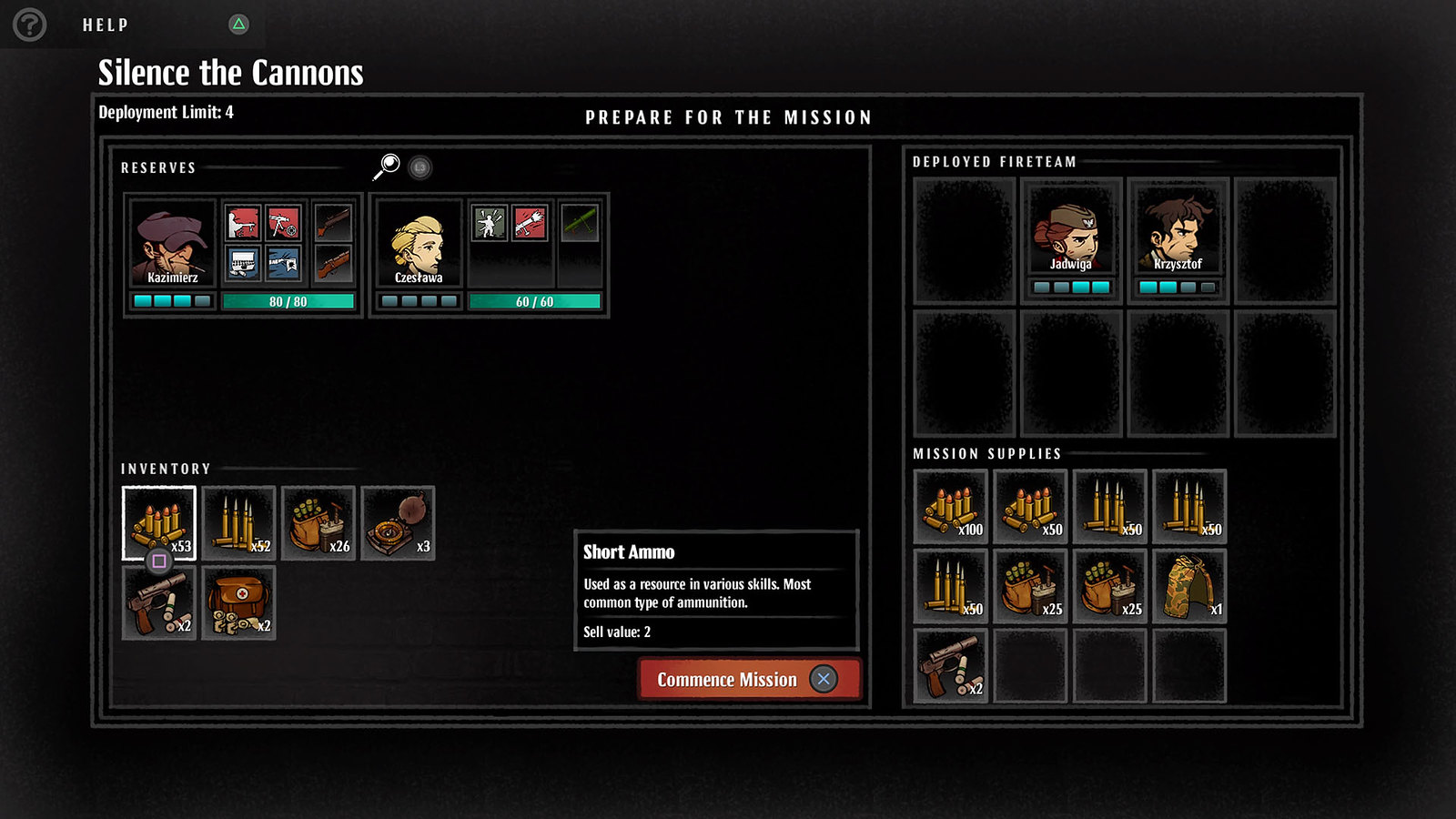 Make sure to choose wisely what you bring with you on the mission and what you pick up, because you’ll most likely not be able to carry everything.

Navigating the streets of Warsaw

I grew up in the Ochota district. I’ve played soccer in its backyards, I’ve staggered drunkenly through every corner of it on the night I enlisted. And I’m sure you know this city inside out too. Our enemies don’t. We’ll use that. 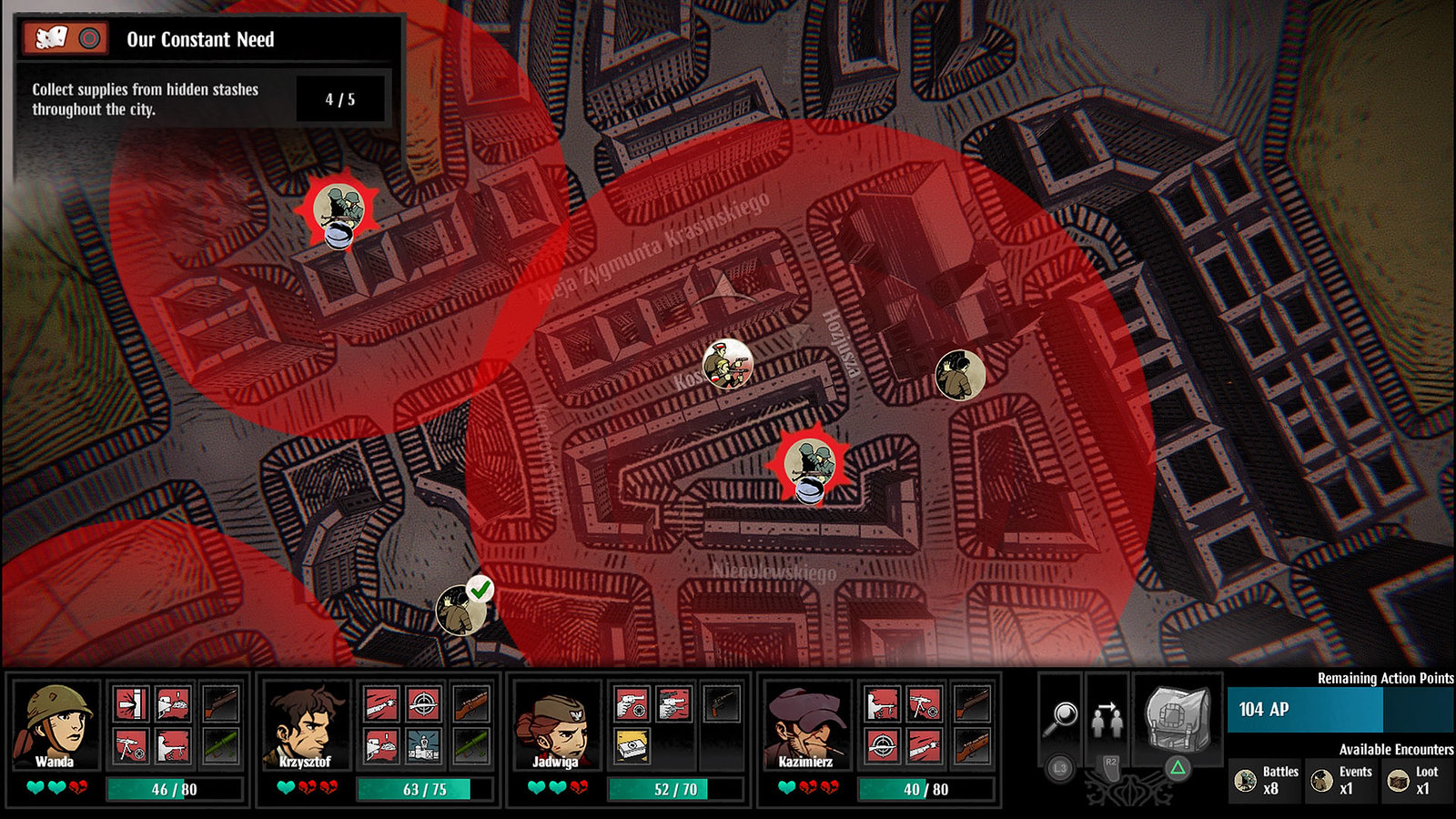 Leading your team through the streets you’ll have to be careful. Patrols will be everywhere. Weigh your options and pick your fights. Is it wise to engage the enemy when your squadmates already took a beating that night? Do you have enough ammo, bandages, grenades, or flares to complete the objective and get safely back to the HQ?

Well, I hope this little pep-talk didn’t scare you off and you’ll make a great leader. I know you will. Get ready, the fight begins soon. Give ‘em hell! Warsaw is preparing to take the fight to PS4. All freedom fighters need to report on September 29.

PlayStation loves creators, and we’ve put together a sale devoted to industry innovators. Starting now, save up to 60 percent on ambitious puzzlers, Kickstarter-funded student projects, handcrafted roguelikes and more. PlayStation Plus members save u...

Now that we’re getting ready to launch the game on PlayStation 4 on December 7, we’d like to reflect on our development and feedback from our community, which has brought PUBG to where it is today.