Trump, Biden Enter a Contentious Stage in the Presidential Race

WASHINGTON—Entering a contentious stage in the presidential campaign, President Trump is seeking to focus voters on an economic rebound and law and order, while Democratic challenger Joe Biden is redoubling efforts to make the election a referendum on the president’s performance on the coronavirus pandemic and the economy.

With the start of early voting in some states this month, Mr. Trump and Mr. Biden are fighting for control of a battleground map stretching across a dozen states against the backdrop of a pandemic that has upended traditional campaigning.

Mr. Biden threatens to make Mr. Trump the first president to lose re-election in nearly 30 years. A series of polls released since their late August nominating conventions show Mr. Biden maintaining a lead nationally and in key states, though Mr. Trump is within striking distance in some surveys and his campaign insists internal data show a closer race.

Much could hinge on whether Mr. Biden can keep the focus on Mr. Trump’s handling of the pandemic, as he argues that the president’s response has cost American lives and damaged the economy.

Mr. Trump is countering with suggestions that life under a President Biden would lead to economic distress, as well as chaos in the streets because he is siding with protesters and insufficiently tough on lawbreaking. Mr. Trump is seeking to highlight recent economic gains, such as Friday’s jobs report showing that the economy added 1.4 million jobs and the unemployment rate fell to 8.4%.

Their dueling messages are playing out before a fractured nation contending with a pandemic that has claimed more than 185,000 lives and a debate over racial justice that has spurred widespread peaceful protests and some violent clashes.

Mr. Biden, who stayed at his Delaware home during the weekend, was spending Labor Day in Harrisburg, Pa., at an event with the AFL-CIO. Mr. Trump visited his Virginia golf club on Saturday and Sunday, firing off tweets defending his policies and criticizing Democrats. Mr. Trump announced Monday morning that he would be holding a news conference at the White House at 1 p.m. 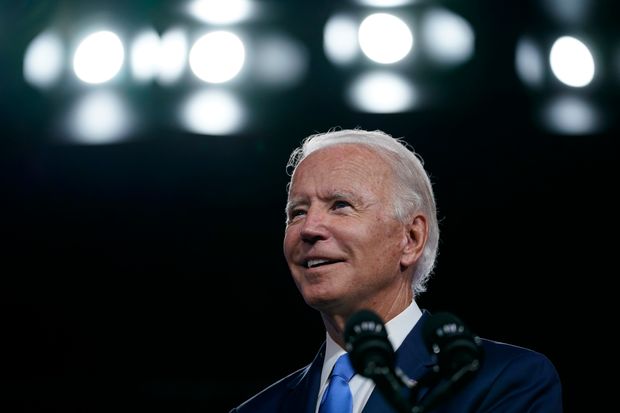 Polls show Joe Biden maintaining a lead nationally and in key states, although President Trump is within striking distance in some surveys.

Pennsylvania, a crucial tossup state, will draw both candidates later in the week for the 19th anniversary of the Sept. 11 attacks at a memorial in Shanksville to the Flight 93 passengers and crew who fought back against hijackers. Their planned appearances raise the possibility that the rivals could come face-to-face for the first time during the race.

Mr. Trump and Mr. Biden have traveled to key Electoral College states since their nominating conventions concluded last month, with both campaigns paying close attention to the industrial Midwest region that is likely to be key to victory.

Mr. Biden held in-person events on four days last week, including one in Wisconsin, in his most extensive week of campaigning since the spring. He plans to make stops in Michigan and Pennsylvania next week. In addition to Pennsylvania, Mr. Trump will travel to Michigan, Florida and North Carolina this week.

“It’s better to be on offense than defense. Obviously, that’s where we are,” said campaign manager Bill Stepien during a recent briefing with reporters, pointing to momentum since the party’s convention.

Mr. Biden’s advisers contend that the race has remained stable and dispute that Mr. Trump has made significant gains since the Republican convention. They also point to polls showing Mr. Biden at 50% support in a number of battleground states, an indication of his staying power.

“We still believe that this is a referendum on Donald Trump. You know, he’s desperately tried to change that and that really hasn’t happened,” said Mike Donilon, a top strategist for Mr. Biden.

During the coming three weeks leading up to their first debate, Mr. Biden and his campaign say he will draw a contrast with Mr. Trump on the economy, using a series of speeches and events to undercut the president’s argument that he can return America to prosperity after the pandemic.

Mr. Trump is also planning to focus on the economy, stressing recent jobs gains to make the argument that he can guide an economic rebound. He also intends to continue to cast Mr. Biden and Democrats as being soft on crime. 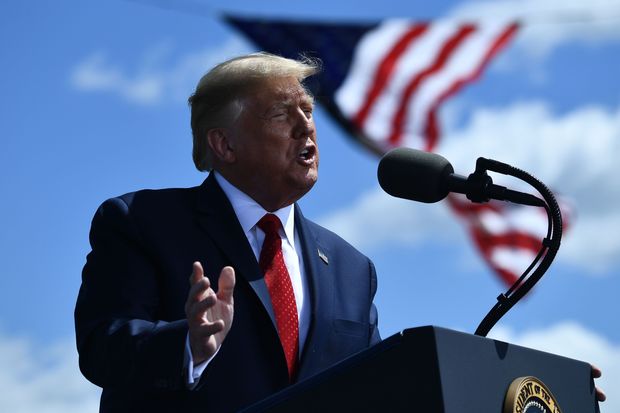 Safety has taken on fresh urgency as a campaign issue after the police shooting of Jacob Blake, a Black man in Kenosha, Wis., touched off days of protests that were largely peaceful during the day but followed by nights of violence, including the fatal shooting of two protesters by an out-of-state teenager.

Both candidates visited Kenosha last week. Mr. Trump’s aides and allies said they see their law-and-order theme as a strong argument, particularly for suburban women, who have cooled on the president.

“The president’s message supporting law enforcement and also condemning rampant violence in Democratic-run cities…and Democratic refusal to lead is resonating across the country,” said Republican National Committee Chairwoman Ronna McDaniel. She said issues such as school reopenings were also key for many women.

In recent days, the president defended himself against a report in the Atlantic that he had called Americans who died in war “losers” and “suckers.” Mr. Trump, who has made support for the military a theme of his campaign, denied the report as a hoax, and aides moved aggressively to discredit it.

Mr. Biden called the reported remarks “disgusting” and his team intends to highlight the report in advertising aimed at veterans and military retirees.

Do you think voters this year are more interested in the candidates’ records or their promises? Join the conversation below.

The Trump campaign sees a pickup opportunity in Minnesota, which the president narrowly lost in 2016, and remains hopeful about capturing New Hampshire. Some Trump aides see Michigan as unlikely to stay in their column, but they argue they have a number of options to reach the 270 electoral votes needed.

“I think it’s going to boil down how well we can articulate how different the economy would be under their policies,” said Sen. Mike Braun (R., Ind.). Mr. Braun said that Republicans must also defend their record on the coronavirus and question Democratic policies on safety, predicting that “it’s going to start tightening things even further into the finish line.”

Mr. Biden’s campaign said during a recent briefing for reporters that it continues to maintain multiple paths to crossing the threshold of 270 electoral votes, pointing to polling advantages in several states, including Florida, Pennsylvania, Michigan, Wisconsin and Arizona. His allies scoff at Mr. Trump’s ability to expand the map.

Arizona has been reliably Republican since 1996 and Minnesota reliably Democratic since 1972. But as WSJ’s Gerald F. Seib explains, both states are in play for the 2020 election. Photos: Stephen Maturen/Getty Images

A 58-year-old man has been charged in connection with a fatal boat crash that happened on Lake Muskoka in July, Bracebridge OPP say. Just before noon on July 5, a crash happened involving a personal watercraft and a human-powered boat, police say. Re...

Exclusive Felicity Huffman can see the light at the end of the tunnel in the college admissions scandal, and the first right she wants back … the ability to leave the U.S. The ‘Desperate Housewives’ actress’ legal team filed new docs, asking a judge...