0
‘Our Game: Road to the 2021 World Juniors’ is a three-part documentary series that gives fans insight into the inner workings of the tournament. Continue reading →

The first part of a three-part documentary series on Team Canada’s experience within the World Juniors hockey bubble — held in Edmonton from late December 2020 to early January 2021 — was released Thursday.

Our Game: Road to the 2021 World Juniors was produced by Edmonton-based Shane Fennessey, who also produced Making Coco: The Grant Fuhr Story in 2018.

He said the project, which was funded through a Telus grant, felt necessary because the fans weren’t able to experience the games in the same way this year due to the COVID-19 pandemic.

Read more: A barber, a band and a bubble: How an Edmonton hairdresser ended up in the NHL’s hub at Rogers Place

“The World Juniors in Canada, we all know is such a staple of Canadian hockey culture,” Fennessey said. “Edmonton is such a great host city.

“Unfortunately, with fans unable to attend this year, it was more important that we were able to go behind the scenes and give fans an insight.” 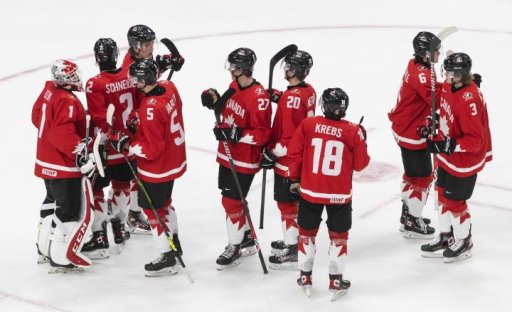 “We worked in conjunction with Hockey Canada,” Fennessey said. “We though it would be best to follow western-based Canadian players.

“Out of those five, two are actually from our own backyard here in Edmonton.”

The first episode focuses on selection camp, the second on the tournament’s preliminary round, and the third and final episode features the medal rounds.

Fennessey said that the tight COVID-19 protocols in place — which also led to a 14-day quarantine period during selection camp — made it a difficult project to film.

“That’s a lot of down time that we didn’t have access to the players,” he said.

“We couldn’t film any practices. We were lucky to have the guys providing cell phone footage and Zoom call footage for us during the tournament.”

Just one person was permitted access into the bubble to actually film — the series’ director of photography Harrison Mendel.

Fennessey said in a non-COVID production, it would have been more like four or five staff.

“It was really a team effort,” he said, explaining that producers would use technology to conduct the interviews and Mendel’s footage would be passed off to editors daily.

“What really stood out to me was how professional these kids really are,” Fennessey said.

“Talking to them in the interviews — even with the cameras not rolling — they realize what an honour it is to play for Team Canada.”

In a move to limit contact between players and staff, team captains were tasked with handing out the medals.

“(Team Canada’s) captain Bowen Byran… is the only team captain to actually have (had) to hand out medals to his losing team,” Fennessey  said.

“You just see the composure in which he handled it, and the emotion that all the guys are going through.

“It all really shows you how much this means to the players.”

The first episode was made available to watch on April 8. The second will be released online on April 15, and the final episode is set to come April 22.