Show Us Your Speed! 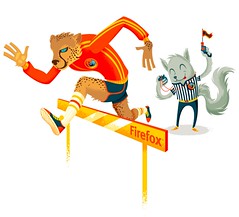 That’s a fact worth celebrating, and to spread the word we’ve reached out to some of our fellow Guinness World Record holders, each of whom knows a few things about speed. Our first record holder is Kent “Toast” French, whose ability to clap his hands 721 times in a minute (averaging 12x/second!) officially earns him the title of the world’s fastest clapper. Along with his son Joshua, Kent put on a truly astounding display of in honor of Firefox 3.5:

We know that Kent isn’t the only person in the global Mozilla community with a talent for speed, so if you want to help tell the world about Firefox 3.5 here’s what to do:

1. Make a short (30 seconds, max) video of you doing your speediest skill. It doesn’t matter if it’s making a sandwich, changing a tire or mowing your lawn…it just has to be fast.

(More details on this project at www.intothefuzz.com)