Q&A: Igniting imaginations and putting VR in the hands of students with Kai Frazier 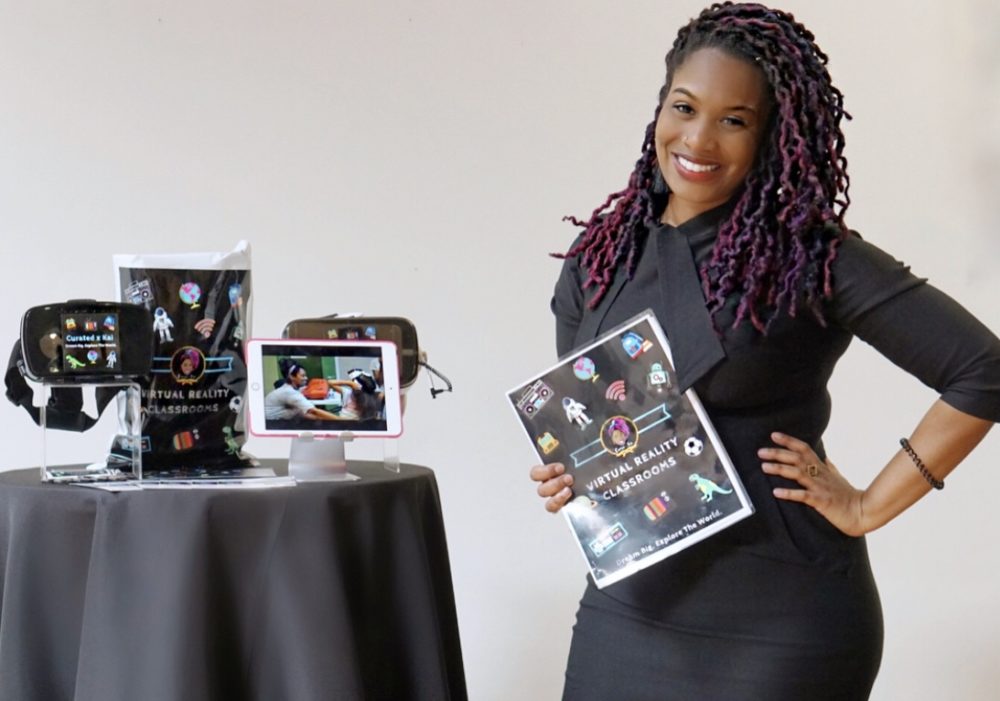 When you were in school, you may have taken a trip to a museum or a local park, but you probably never got to see an active volcano or watch great whites hunt. As Virtual Reality grows, this could be the way your kids will learn — using headsets the way we use computers.

When you were in school, you may have gone on a trip to the museum, but you probably never stood next to an erupting volcano, watching molten lava pouring down its sides. As Virtual Reality (VR) grows, learning by going into the educational experience could be the way children will learn — using VR headsets the way we use computers.

This kind of technology holds huge potential in shaping young minds, but like with most technology, not all public schools get the same access. For those who come from underserved communities, the high costs to technology could widen an already existing gap in learning, and future incomes.

Kai Frazier, Founder of the education startup Curated x Kai, has seen this first-hand. As a history teacher who was once a homeless teen, she’s seen how access to technology can change lives. Her experiences on both ends of the spectrum are one of the reasons why she founded Curated x Kai.

As a teacher trying to make a difference, she began to experiment with VR and was inspired by the responses from her students. Now, she is hard at work building a company that stands for opening up opportunities for all children.

We recently sat down with Frazier to talk about the challenges of launching a startup with no engineering experience, and the life-changing impact of VR in the classroom.

How did the idea to use VR to help address inequality come up?
I was teaching close to Washington D.C., and my school couldn’t afford a field trip to the Martin Luther King Memorial or any of the free museums. Even though it was a short distance from their school, they couldn’t go. Being a teacher, I know how those things correlate to classroom performance. 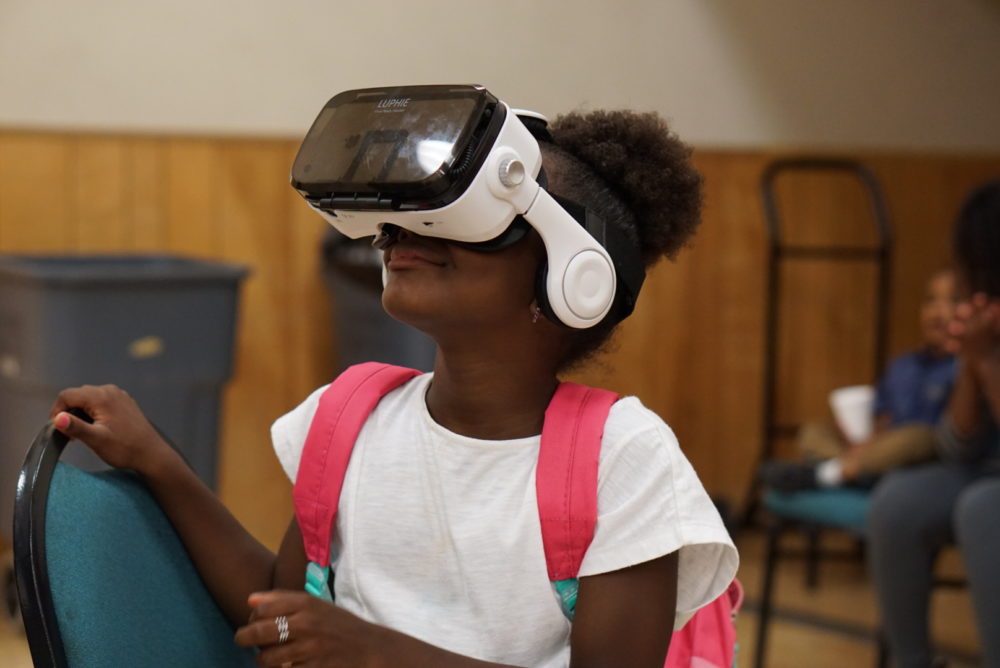 As a teacher, it must have been difficult for you to see kids unable to tour museums and monuments, especially when most are free in D.C. Was it a similar situation similar when it came to accessing technology?
When I was teaching, it was really rough because I didn’t have much. We had so few laptops, that we had a laptop cart to share between classrooms. You’d sign up for a laptop for your class, and get a laptop cart once every other week. It got so bad that we went to a ‘bring your own device’ policy. So, if they had a cellphone, they could just use a cellphone because that’s a tiny computer.

And computers are considered essential in today’s schools. We know that most kids like to play with computers, but what about VR? How do educational VR experiences impact kids, especially those from challenging backgrounds or kids that aren’t the strongest students?
The kids that are hardest to reach had such strong responses to Virtual Reality. It awakened something in them that the teachers didn’t know was there. I have teachers in Georgia who work with emotionally-troubled children, and they say they’ve never seen them behave so well. A lot of my students were doing bad in science, and now they’re excited to watch science VR experiences.

Let’s back up a bit and talk about how it all started. How did you came up with the idea for Curated x Kai?
On Christmas day, I went to the MLK Memorial with my camera. I took a few 360-videos, and my students loved it. From there, I would take a camera with me and film in other places. I would think, ‘What could happen if I could show these kids everything from history museums, to the world, to colleges to jobs?’

And is that when you decided to launch?
While chaperoning kids on a college tour to Silicon Valley, I was exposed to Bay Area insights that showed me I wasn’t thinking big enough. That was October 2017, so by November 2017, I decided to launch my company.

When I launched, I didn’t think I was going to have a VR company. I have no technical background. My degrees are in history and secondary education. I sold my house. I sold my car. I sold everything I owned. I bootstrapped everything, and moved across the country here (to the San Francisco Bay Area).

When you got to San Francisco, you tried to raise venture capital but you had a hard time. Can you tell us more about that?
No matter what stage you’re in, VCs (Venture Capitalists) want to know you’re not going to be a large risk. There aren’t many examples of people with my background creating an ed tech VR company, so it feels extremely risky to most.The stat is that there’s a 0.2 percent chance for a black woman to get VC funding. I’m sure that if I looked differently, it would have helped us to scale a lot faster. 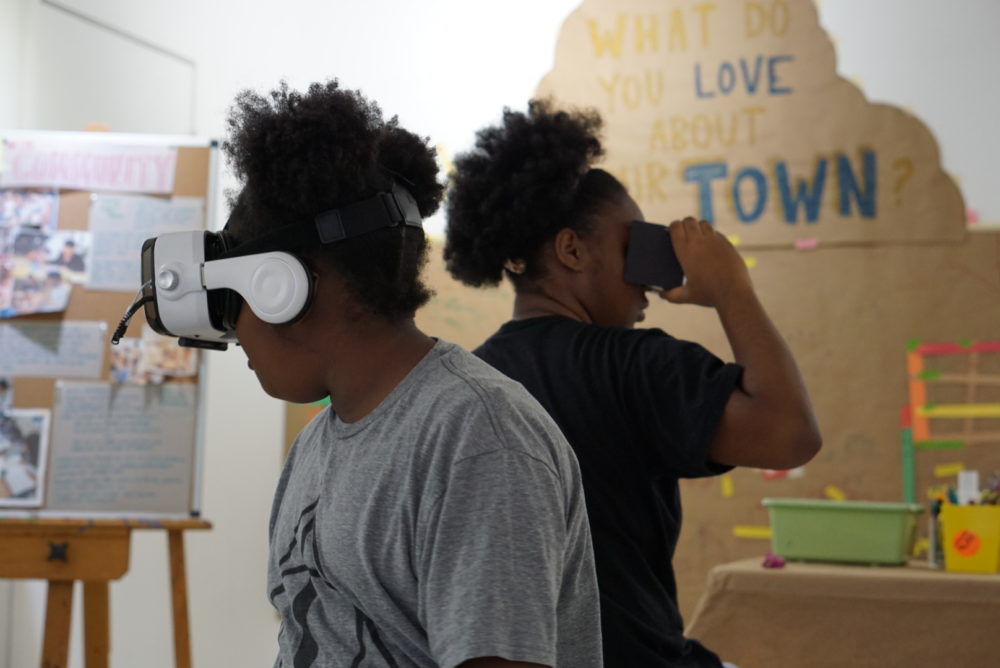 You’re working out of the Kapor Center in Oakland right now. What has that experience been like for you?
The Kapor Center is different because they are taking a chance on people who are doing good for the community. It’s been an amazing experience being incubated at their facility.

You’re also collaborating with the Emerging Technologies team here at Mozilla. Can you tell us more about that?
I’m used to a lot of false promises or lures of diversity initiatives. I was doing one program that catered to diverse content creators. When I got the contract, it said they were going to take my IP, my copyright, my patent…they would own it all. Mozilla was the first time I had a tech company treat me like a human being. They didn’t really care too much about my background or what credentials I didn’t have.

And of course many early engineers didn’t have traditional credentials. They were just people interested in building something new. As Curated x Kai developed, you choose Hubs, which is a Mozilla project, as a platform to host the virtual tours and museum galleries. Why Hubs when there are other, more high-resolution options on the market?
Tools like Hubs allow me to get students interested in VR, so they want to keep going. It doesn’t matter how high-res the tool is. Hubs enables me to create a pipeline so people can learn about VR in a very low-cost, low-stakes arena. It seems like many of the more expensive VR experiences haven’t been tested in schools. They often don’t work, because the WiFi can’t handle it.

That’s an interesting point because for students to get the full benefits of VR, it has to work in schools first. Besides getting kids excited to learn, if you had one hope for educational VR, what would it be?
I hope all VR experiences, educational or other, will incorporate diverse voices and perspectives. There is a serious lack of inclusive design, and it shows, from the content to the hardware. The lack of inclusive design creates an unwelcoming experience and many are robbed from the excitement of VR. Without that excitement, audiences lack the motivation to come back to the experience and it hinders growth, and adaptation in new communities — including schools.

Meet the 2020 Doodle for Google winner!

Sharon’s Doodle titled “Together As One” highlights the importance of inclusion and acceptance, and was inspired by her personal experiences with friendship and her strong commitment to spreading kindness. Let’s get to know this year’s  Doodle for Go...

‘Frankly, if it’s not necessary for us to be in hotels, I don’t have any interest in paying for that.’ Continue reading →