As discussed in part III, public key authentication is great in principle but in practice has been hard to integrate into the Web environment. However, we’re now seeing deployment of a new technology called WebAuthn (short for Web Authentication) that hopefully changes that.1

The key difference here is that previous systems tended to operate at a lower layer (typically HTTP or TLS), which made it hard for the site to control how and when authentication happened.2 By contrast, a JS API puts the site in control so it can ask for authentication when it wants to (e.g., after showing the home page and prompting for the username).

WebAuthn offers two new API points that are used by the server’s JavaScript [Technical note: These are buried in the credential management API.]:

The way this is used in practice is that when the user first registers with the server — or as is more likely now, when the server first adds WebAuthn support or detects that a client has it — the server uses makeCredential() to create a new public key pair and stores the public key, possibly along with an attestation. An attestation is a provable statement such as, “this public key was minted by a YubiKey.” Note that unlike some public key authentication systems, each server gets its own public key so WebAuthn is harder to use for cross-site tracking (more on this later). Then when the user returns, the site uses getAssertion(), causing the browser to sign the server’s challenge using the private key associated with the public key. The server can then verify the assertion, allowing it to determine that the client is the same endpoint as originally registered (for some value of “the same”. More on this later too).

The clever bit here is that because this is all hidden behind a JS API, the site can authenticate the client at any part of its login experience it wants without disrupting the user experience. In particular, WebAuthn can be used as a second factor in addition to a password or as a primary authenticator without a password.

The WebAuthn specification doesn’t require any particular mechanism for handling the key pair, so it’s technically possible to implement WebAuthn entirely in the browser, storing the key on the user’s disk. However, the designers of WebAuthn and its predecessor FIDO U2F were very concerned about the user’s machine being compromised and the private key being stolen, which would allow the attacker to impersonate the user indefinitely (just like if your password was compromised).

Accordingly, WebAuthn was explicitly designed around having the key pair in a hardware token. These tokens are designed to do all the cryptography internally and never expose the key, so if your computer is compromised, the attacker may be able to impersonate you temporarily, but they won’t be able to steal the key. This also has the advantage that the token is portable, so you can pull it out of your computer and carry it with you — thus minimizing the risk of your computer being stolen — or plug it into a second computer; it’s the token that matters not the computer it’s plugged into. We’re also starting to see hardware backed designs that don’t depend on a token. For instance, modern Macs have trusted hardware built in to power TouchID and FaceID and Apple is using this to implement WebAuthn. We have been looking at similar designs for Firefox.

While hardware key storage isn’t mandatory, WebAuthn was designed to allow sites to require it. Obviously you can’t just trust the browser when it says that it’s storing the key in hardware and so WebAuthn includes an attestation scheme that is designed to let the site determine the type of token/device being used for WebAuthn. However, there are privacy concerns about the attestation scheme 3 and many sites don’t actually insist on it. Firefox shows a separate prompt (shown below) when the site requests attestation. 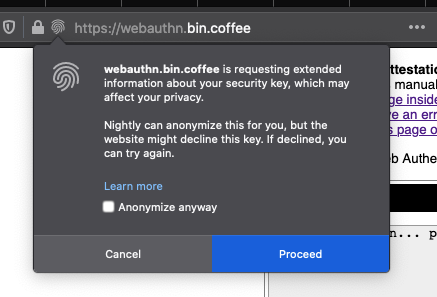 While as a technical matter a browser or token could just do all the WebAuthn computations automatically with no user interaction, that’s not really what you want for two reasons:

In order to prevent this, FIDO-compliant tokens require the user to do something (typically touch the token) before signing an assertion. This prevents invisible tracking or use of the key to log in. Apple’s use of FaceID/TouchID takes this one step further, requiring a specific user to authorize a login, thus protecting you in case your laptop is stolen.

If you’re familiar with Web technologies, you might be wondering why we need something new here. In particular, many of the properties of WebAuthn could be replicated with cookies or WebCrypto. However, WebAuthn offers a number of advantages over these alternatives.

First, because WebAuthn requires user interaction prior to authentication it is much harder to use for tracking. This means that the browser doesn’t need to clear WebAuthn state when it clears cookie or WebCrypto state as they can be used for invisible tracking. It would be possible to add some kind of explicit user action step before accessing cookies or WebCrypto but then you would have something new.

Second, when used with keys in hardware, WebAuthn is more resistant to machine compromise. By contrast, cookies and WebCrypto state are generally stored in storage which is available directly to the browser, so if it’s compromised they can be stolen. While this is a real issue, it’s unclear how important it is: many sites use cookies for authentication over fairly long periods (when was the last time Facebook made you actually log in?) and so an attacker who steals your cookies will still be able to impersonate you for a long period. And of course the cost of this is that you have to buy a token.

Technically, WebAuthn is a pretty big improvement over pre-existing systems. However, authentication systems tend to rely pretty heavily on network effects: it’s not worth users enabling it unless a lot of sites use it and it’s not worth sites enabling it unless a lot of users are willing to sign up. So far, indications are pretty promising: a number of important sites such as GSuite and Github already support WebAuthn as do SSO vendors like Okta and Duo. All four major browsers support it as well. With any luck we’ll be seeing a lot more WebAuthn deployment over the next few years — a big step forward for user security.

Up Next: Login and Device Encryption

This about wraps it up for remote authentication, but what about logging into your computer or phone? I’ll be covering that next.

Thanks to JC Jones and Chris Wood for help with this post.

Fast, personalized and private by design on all platforms: introducing a new Firefox for Android experience