Obsidian introduces the setting of The Outer Worlds: Peril on Gorgon

Greetings, colonists, and welcome to the Gorgon asteroid, Spacer’s Choice’s second-best-kept secret (after their surprisingly accurate Prototype Light Pistol). This is a state-of-the-art* research facility where the company’s best and brightest** minds dedicated themselves to the development and manufacture of Adrena-Time, Halcyon’s most beloved*** injectable drug. 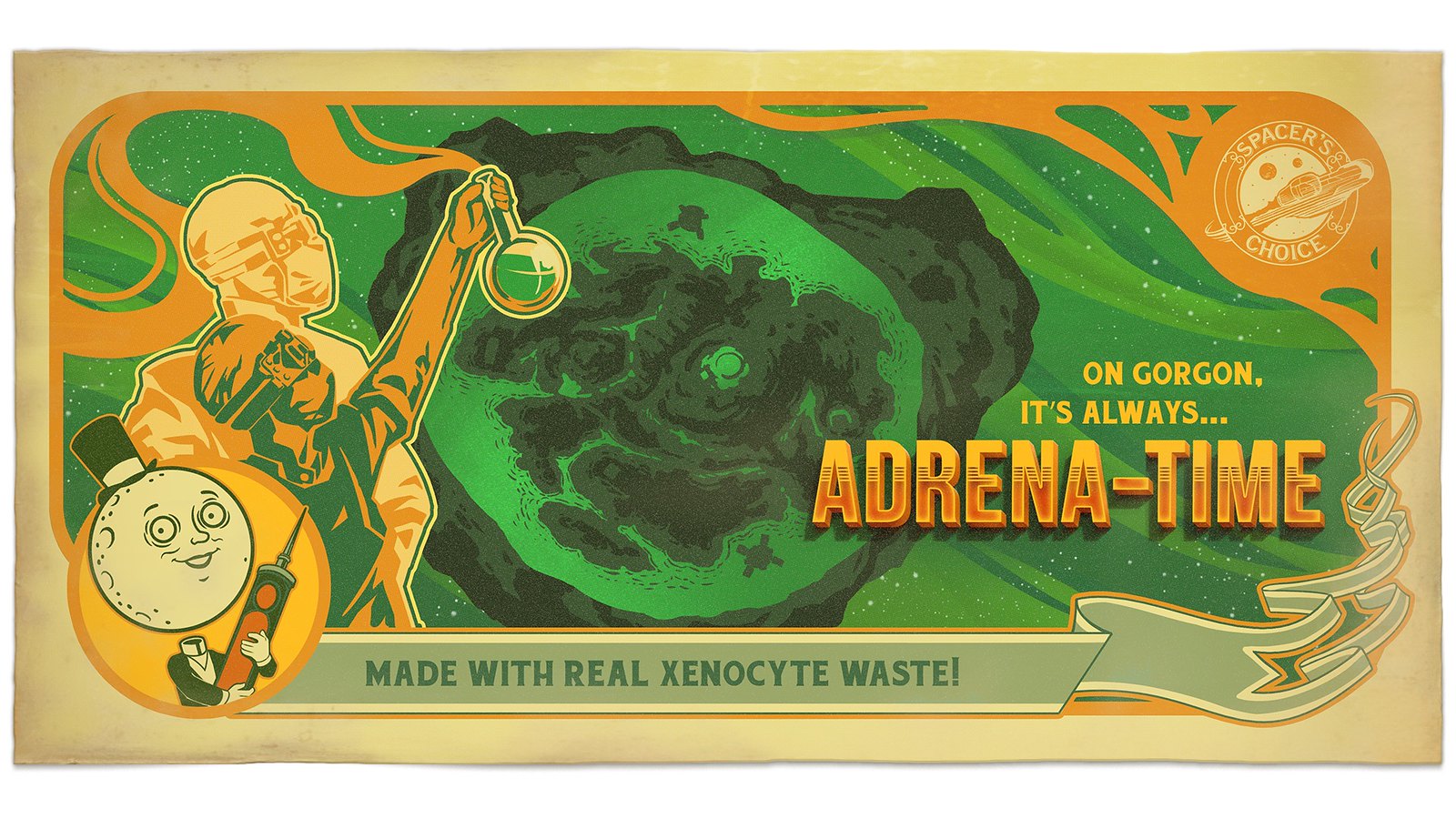 At this point in the tour, I am legally obligated to inform you that Spacer’s Choice has shut down all operations related to Adrena-Time and denies any presence — current or former — on the Gorgon asteroid. Furthermore, they will not be held liable for any death, dismemberment, or Board-issued citations that result from unauthorized tours such as this one. 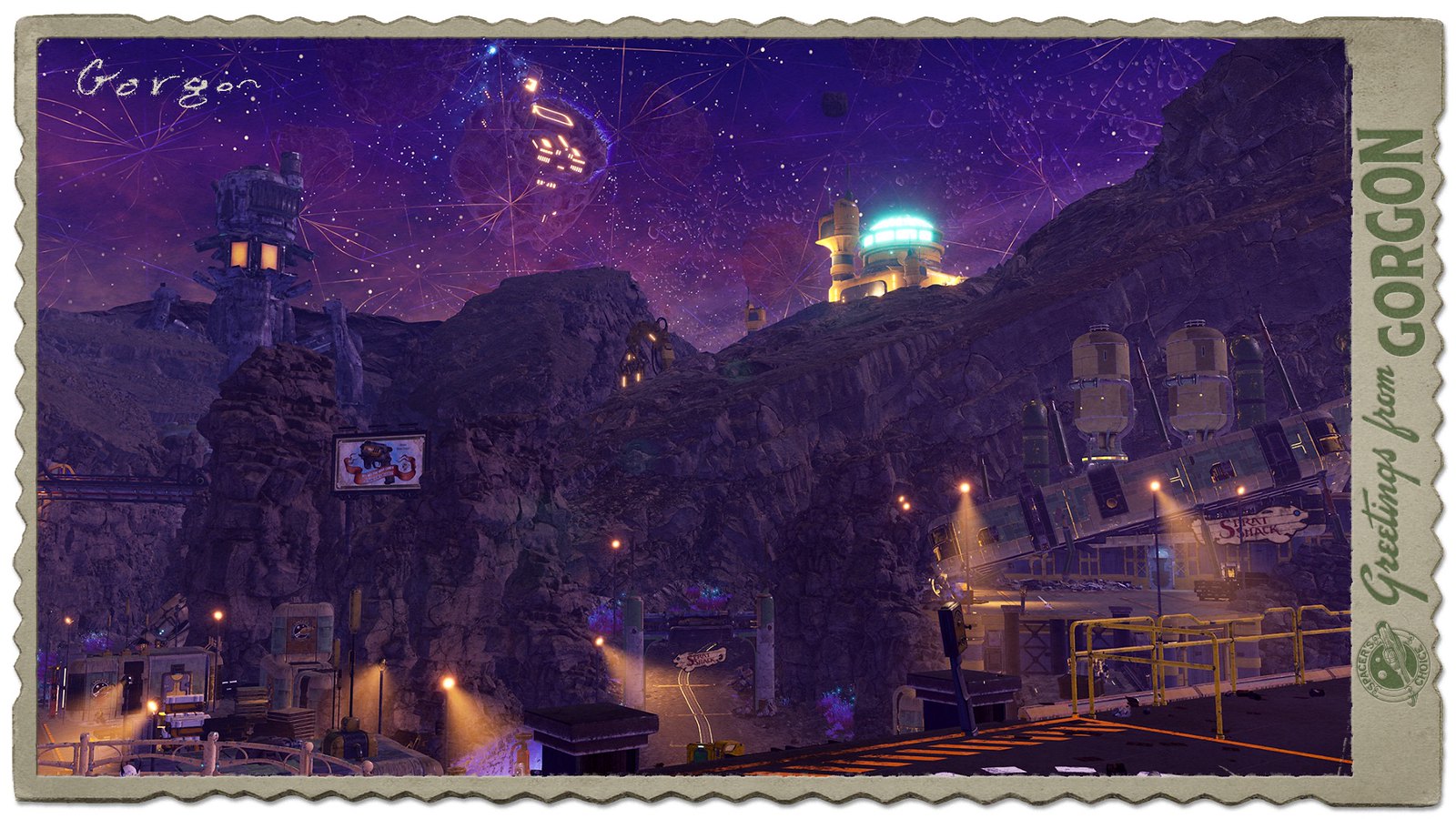 The first thing you’ll notice as we explore Gorgon is the bodies (it’s always the bodies). Science is not for the faint of heart! The second thing is probably the Sprat Shack, conveniently located near Gorgon’s landing pad. SubLight has taken the place over, and it’s a good spot to grab a drink, stock up on supplies, and pick up some jobs from the locals.

They’re a nice enough bunch, just make sure to check with Von Hoffman, the bouncer, on your way in. He keeps some of the… more eccentric characters out, and he doesn’t mess around. 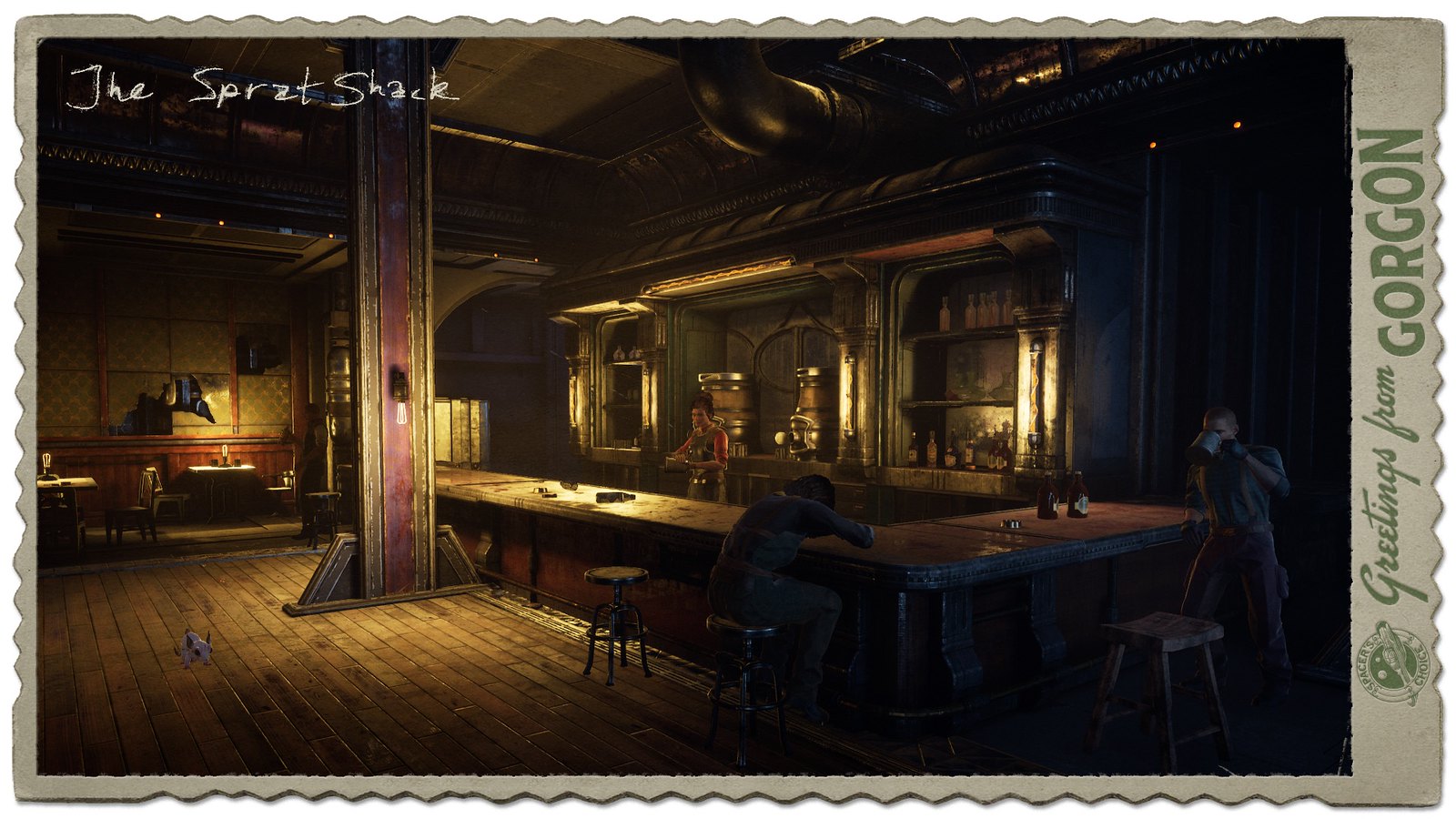 Now that we’ve restocked and gotten leads on some work, it’s time to explore the asteroid proper.

As you step outside, take a deep breath. Feel the faint chemical burn at the back of your throat. That’s the sweet smell of science, held in by the asteroid’s Apex Mark 5 KAISO**** Atmospheric Dome. It’s also nothing to worry about. Probably.

But if you see a golden gleam between the rocks? Congratulations, you’ve found Compound X, a little-understood organic compound and the primary active ingredient of Adrena-Time! Take a good look, but definitely do not touch and/or smell and/or lick it. There are completely unfounded reports of unusual deaths among the miners who first discovered and harvested Compound X.

Gorgon is unlike any other place you’ve visited in Halcyon. It’s a canyon, full of high precipices, deep ravines, and — if you’ve got sharp eyes! — nooks and crannies concealing both dangers and treasures left in Spacer’s Choice’s wake. There’s rumor of a hidden lab somewhere around here where a few of the original scientists were working on a secret side project. But if anyone asks, you didn’t hear it from me. 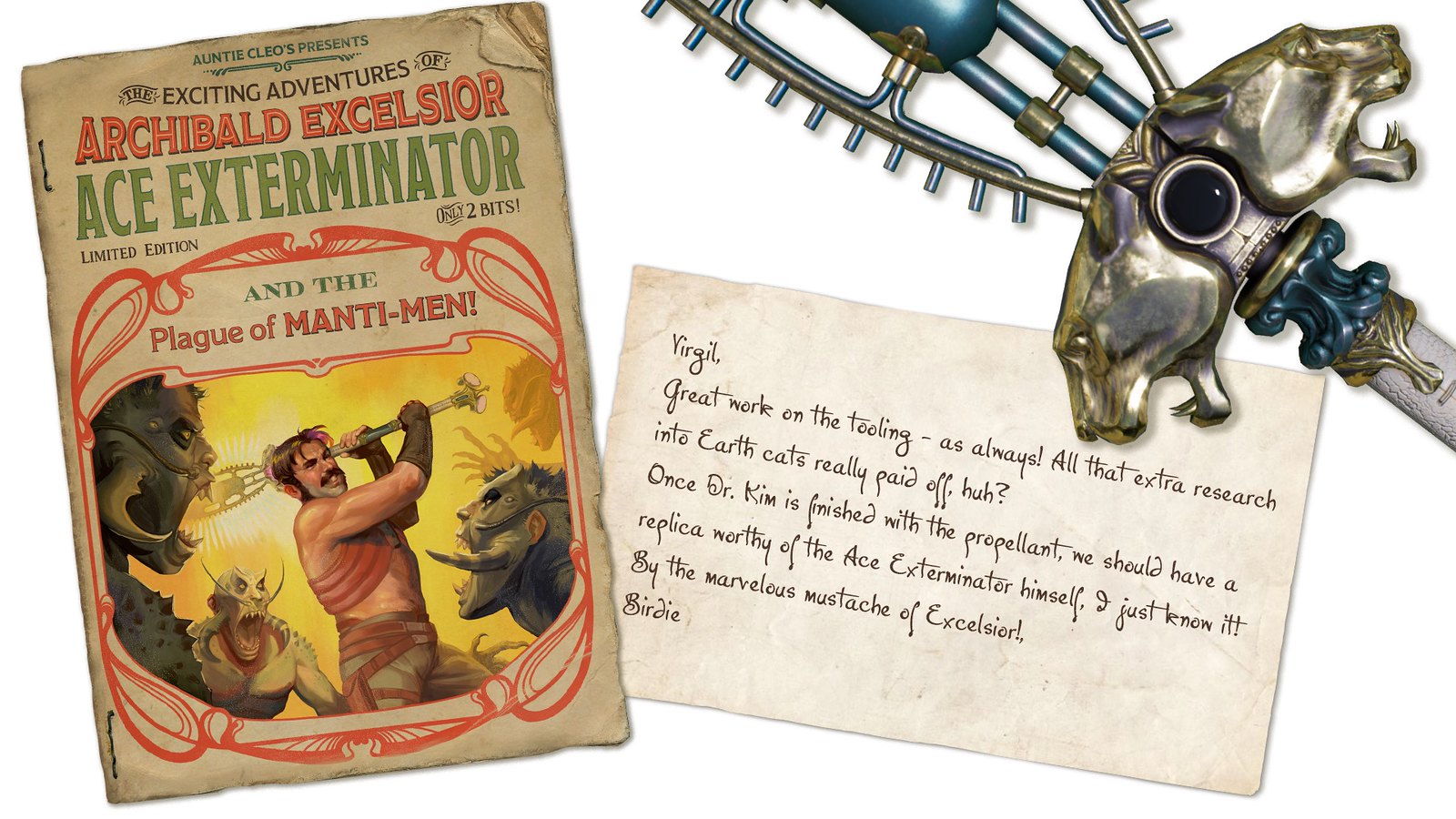 You’ll find lots to explore on Gorgon — abandoned R&D centers perched high on cliffs and refineries set into the ravines below. You’ll have to look around to find your way in, but the journey is just as important as the destination, right? 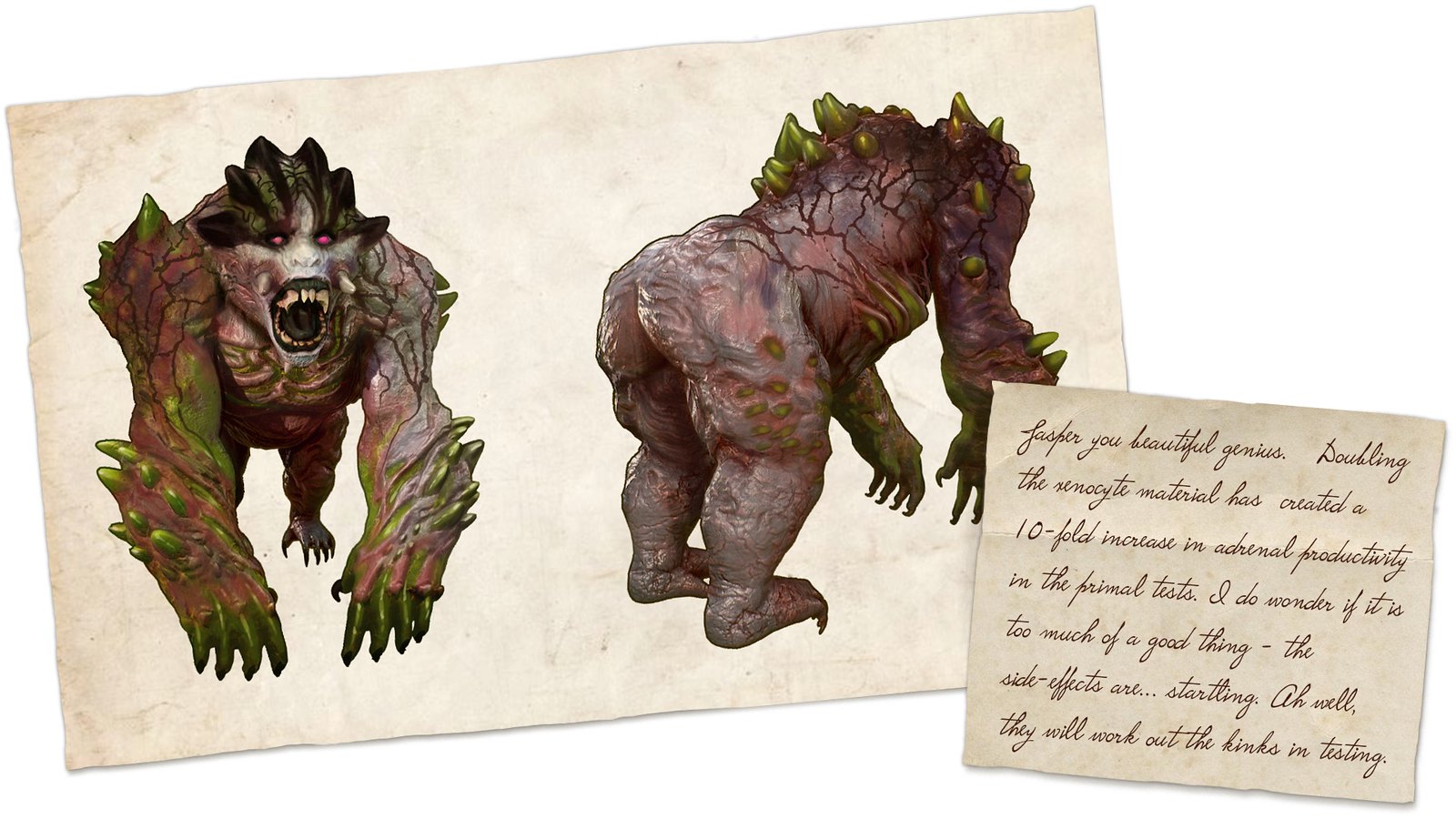 Make no mistake, Gorgon is treacherous. It’s full of marauders, monsters warped by science, and enough toxic pools, unsecured ledges, and out-of-warranty machinery and to give a corporate actuary a coronary. Still, if you find yourself getting lost in the canyons, just look up — you can see the glowing dome of the Synthesis & Manufactory Center from almost anywhere on the asteroid. If that fails, there’s always Ambrose Manor orbiting just above.

But don’t keep looking up. Fatal falls account for approximately 36.2% of all accidental deaths on Gorgon.

We’re looking forward to seeing you here on September 9.

* By Spacer’s Choice’s standards, anyway.
** See caveat above.
*** According to a recent poll of twelve Board-appointed marketing executives.
**** Keeps Air Inside & Space Outside

Returning to the world of Samurai Jack

It has been an amazing road for Samurai Jack since it originally aired on Cartoon Network back in 2001. Genndy Tartakovsky’s epic vision of noble samurai’s heroic quest to undo evil immediately struck a chord with people around the world and would go...

World War Z has been out for just over a year now and we’re thrilled to continue bringing out free major content updates. After all, squaring up against several hundreds of sprinting zombies at a time with three buddies to back you up never goes out...