0
This is the November 2017 edition of “This Month in WordPress with CodeinWP.”  What an exciting month October was in terms of fresh WordPress stuff. Not only is WordPress being constantly improved through various releases and interesting features, but plugins like WooCommerce, Gutenberg, and more keep evolving as well.

Apart from that, you’ll stumble upon several initiatives for making WordPress a better place for everyone and expanding its borders towards new challenges. 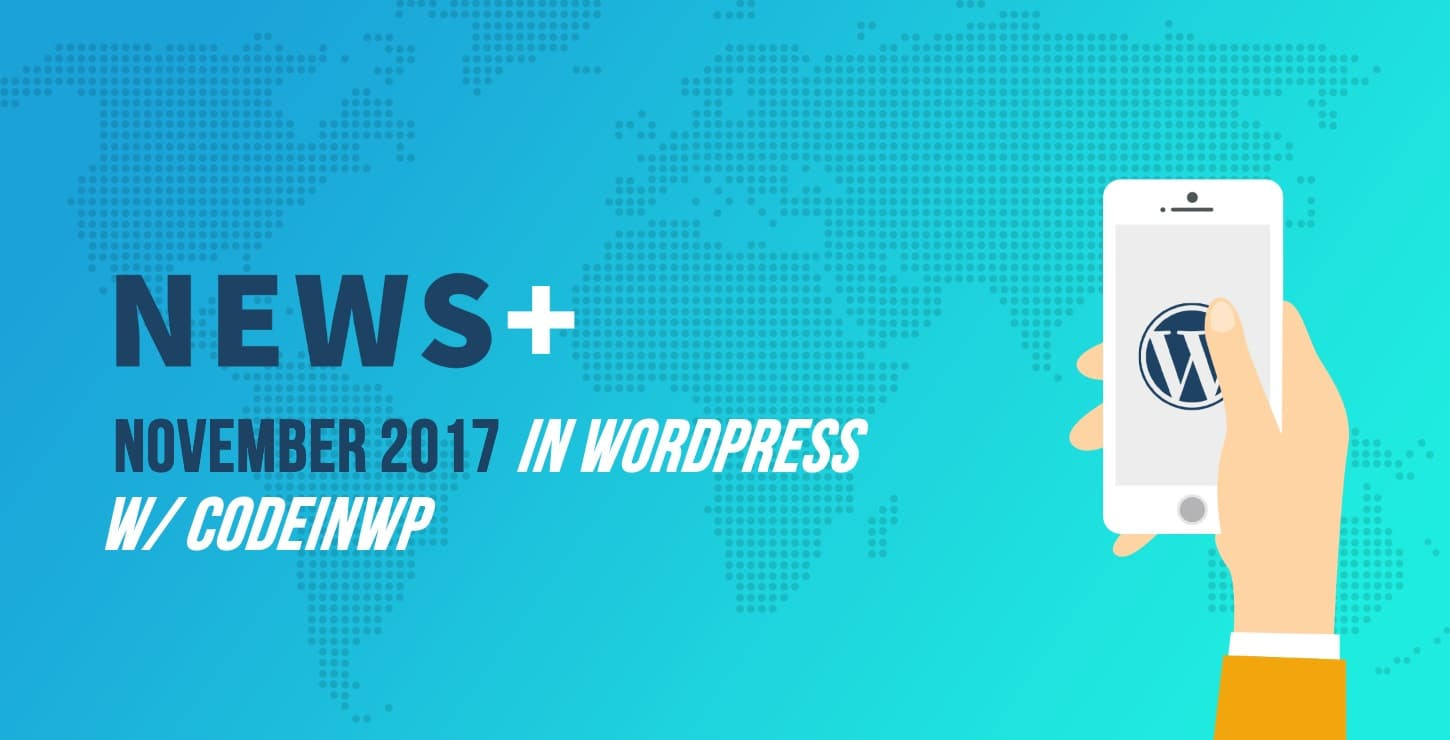 There were so many noteworthy events that I struggled to narrow things down to just a few – so I hope you’ll enjoy this month’s news roundup! This Month in #WordPress With CodeinWP - November 2017 Click To Tweet

In less than two weeks (on November 14th), WordPress 4.9 will be released to the public. Until then, the core developers have released a release candidate, thus people are able to test, experiment, and report any issues encountered along the way. But even though the official version is not out yet, the current one is basically packed with everything that WordPress 4.9 will provide on the launch day. 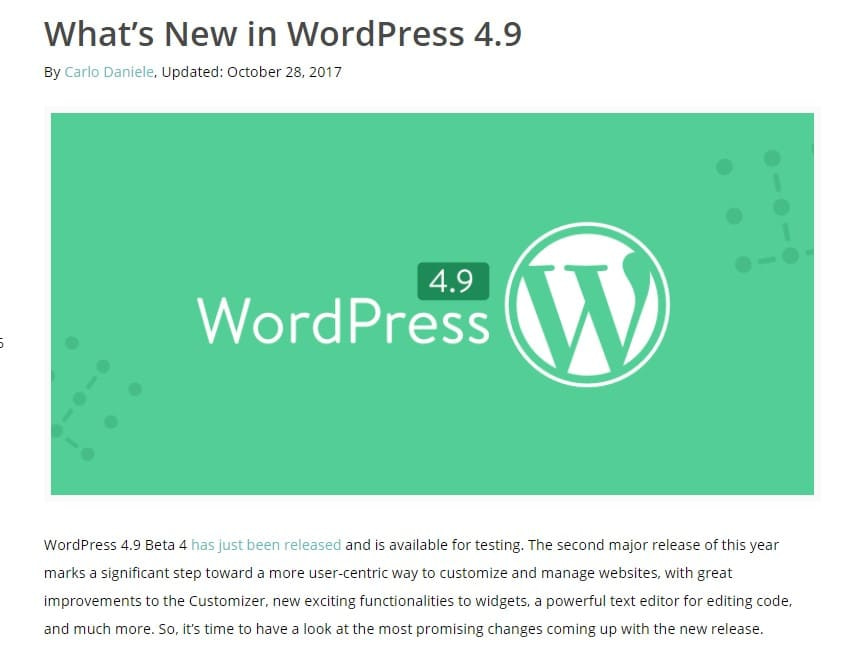 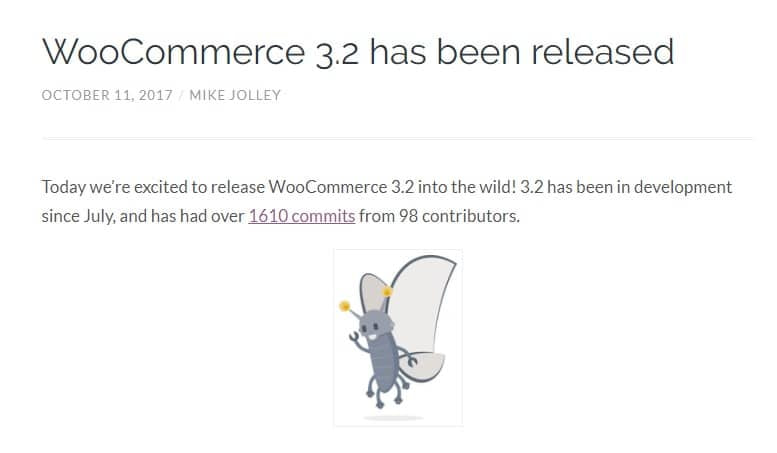 WooCommerce 3.2 has been released

WooCommerce has been upgraded, too. The 3.2 version was released earlier this month after being in development since July. During the process, there have been 1610 commits from 98 contributors. What does it bring new to its users?

By the way, things seem to be going great for WooCommerce stores, as it was announced during WooConf (the conference entirely dedicated to the plugin) that WooCommerce stores will easily surpass $10B in sales by the end of 2017. What can I say… long live WooCommerce!

Poopy.life, the quirkily named WordPress sandbox tool, now has a premium version (without the poopy name!). The paid part of the service is available at WPSandbox.io, and prices range from $49/month to $699/month, depending on the number of installs you need. One of the features in the pro version is the possibility to change the domain name to a more business-friendly one (yeah, I know, such a relief). Overall, all the new features address theme and plugin developers who need a more advanced testing interface than regular users.

The tool with the funny name is a project born six months ago out of an initiative from WP All Import and Oxygen and consists of a temporary testing site where you can have unlimited WordPress installs. The tool provides a replica of a WordPress dashboard where you can add basically everything you need to run your experiments without any unpleasant incidents. 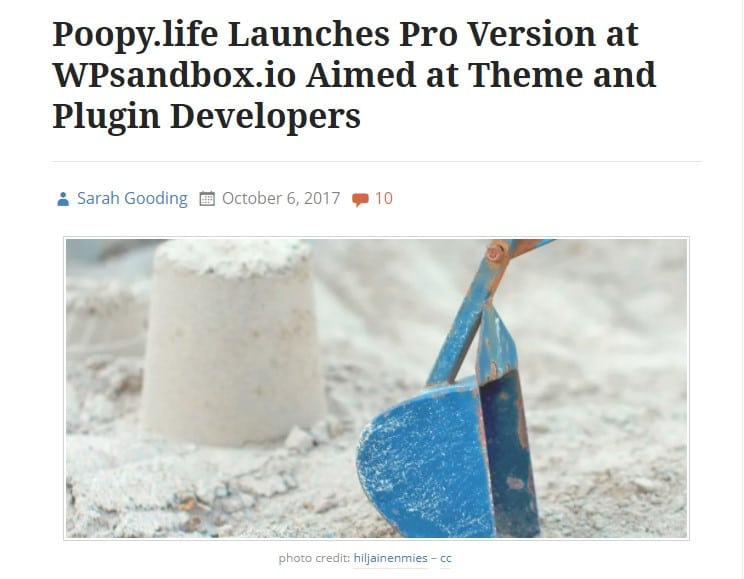 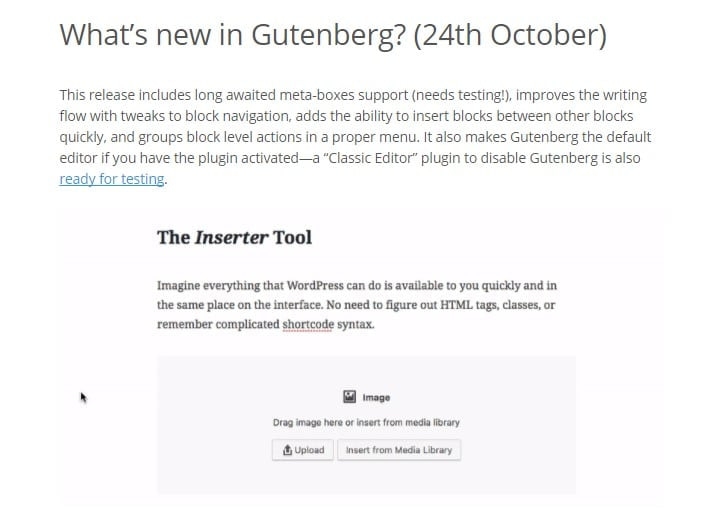 There’s no monthly news without Gutenberg and the improvements it gets on a regular basis. The 1.5 version of the plugin was released last week and brought fresh features to the table. The most notable one is that it makes the new editor the default one when it comes to creating posts, but it keeps the classic format as an available option too – it’s just that you need to select it manually.

Apart from turning the new interface into the default editor, version 1.5 also:

Google’s AMP initiative turned two this October. Over that time, it has grown consistently with – 25 million domains that have published more than 4 billion AMP pages – and has reduced the median of an AMP page loading from Google search to less than half a second.

In the past several months, a lot more work was set on improving the plugin’s functionality and performance, an occasion that brought together Automattic and Google that currently partner to keep the project alive. AMP plugin for WordPress was just recently updated after eight months of inactivity and the users are getting assurance that its future will be bright. 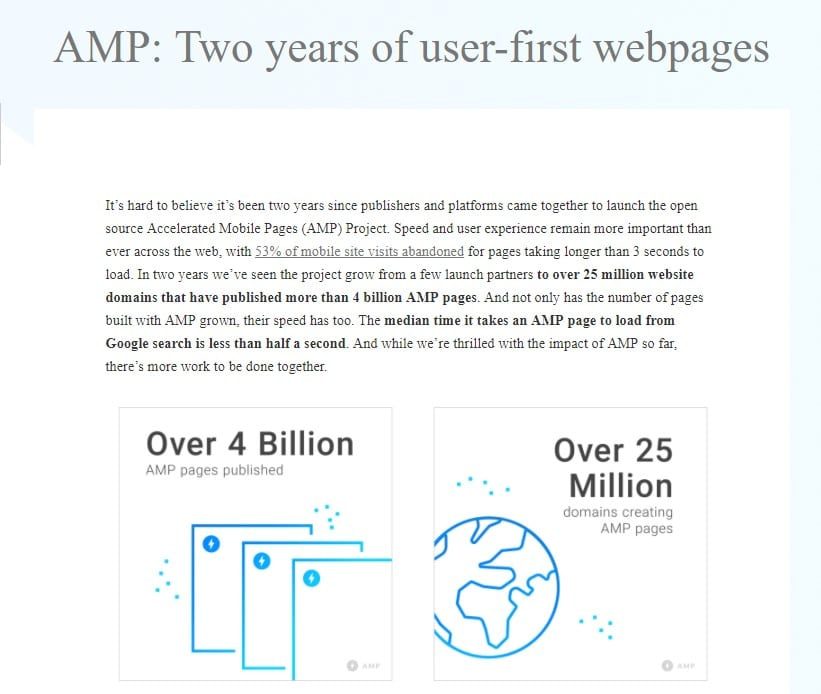 While some plugins are revived and upgraded, others are removed. Postman SMTP was just deleted from WordPress.org at the beginning of October after being infected with an XSS vulnerability. The author was notified of the issue on June 29, but since no one responded or solved the problem, the WordPress team had no choice but to take it out of the directory.

How to organize a meetup successfully and start a new community

Starting a community around a topic of interest is not easy at all, but it’s not impossible. Many ambitious projects started in living rooms with friends and acquaintances, to subsequently turn into meetups and big events, respectively. You and your squad can do it too. Here’s ManageWP’s advice.

WordCamp Incubator Program Gears Up for Round 2

WordCamp Incubator is an experimental program aiming to expand WordPress culture to cities where it was never popular. The program reached its second round and has received 182 applications so far, which were narrowed to three entries: Denpasar (Bali), Harare (Zimbabwe), and Medellin (Colombia). The winner cities will get help from a sponsored volunteer staff to start organizing meetups and WordCamps in the near future.

DonateWC is Working to Send People to WordCamps

Staying in the WordCamps zone, DonateWC is another program aimed to help people who don’t have a great financial status to attend a big WordCamp. The project was founded by Ines van Essen from Automattic and is meant to use the global funds gathered from the community’s donations to pay the flight, accommodation, food, WordCamp ticket, and internet for those who submit the form.

Security Through Obscurity is Not Security At All

Is security through obscurity a worthy goal? David at WPShout argues that it’s not. Read his post for why that is.

The Value of Sponsoring a WordCamp (TranslatePress Perspective)

Why do people sponsor WordCamps? The guys at TranslatePress talk about the perks of investing in such causes and why your company should do that too. Read their post about their sponsorship adventure at WordCamp Bucharest, that took place in early October (and which part of our team attended). How to Build an Amazon Affiliate Store Using WordPress

Well, Amazon is arguably the biggest online store on the web at the moment and being one of their affiliates can get you substantial revenue. That’s why creating an Amazon-based shop would be a good idea and probably easier than producing, selling, and delivering your own products. Here’s how to do that with WordPress.

How to Create a Wiki with WordPress

If you’re wondering whether the WordPress platform is suitable for an online encyclopedia, the answer is yes. The guys at Elegant Themes show you what to do to build such a site. It’s pretty easy.

Looking for WordPress statistics a week ago, we found that XSS vulnerabilities are the most popular when it comes to what causes attacks. So instead of cleaning a hacked site, you could better prevent this kind of vulnerability by following the tips in the above article.

TemplateMonster Has Become a Digital Marketplace

TemplateMonster is one of the most recognizable names when it comes to WordPress themes and templates, and has a worldwide reputation because it includes lots of great designs for other international brands too. Now you have the chance to sell your own themes on their site by simply filling out a form because, from now on, TemplateMonster will be a marketplace for third-party vendors as well.

How to Deal with Scope Creep on a Web Design Project

If you don’t know what “scope creep” means, it’s when a already-defined project suddenly starts to grow in “scope” as the project develops. Here’s how to deal with it.

Do you feel like improving your Contact Form 7 plugin by adding new interesting features to it? Well, this is possible through… other plugins. Conditional fields, submissions, PayPal add-on, dynamic text extension are just a few of the things you can add to your current contact form. Or, you could use an alternative contact form plugin altogether…

That’s it for November. Anything we missed?

This Month in #WordPress With CodeinWP - November 2017 Click To Tweet Don’t forget to join our crash course on speeding up your WordPress site. With some simple fixes, you can reduce your loading time by even 50-80%:

How to Get Unlimited, Sure-to-Work Blog Post Ideas in a Non-Obvious Way (Spoiler Alert: It Involves Talking to Your Audience)

Want to Build Progressive Web Apps Based on WordPress and WooCommerce? Here’s How (w/ Code Examples)