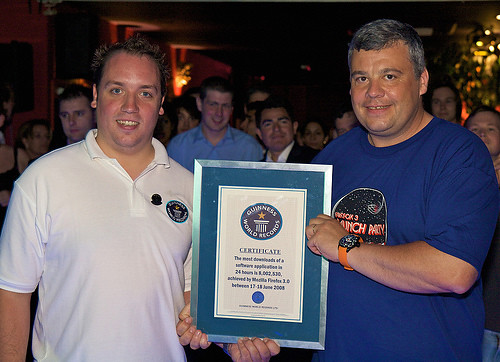 Tristan Nitot, President of Mozilla Europe, accepted the certificate from Gareth Deaves, Records Manager for Internet and Technology at Guinness World Records, on behalf the Firefox Community. The record achievement certificate was awarded in front of a 300 strong community gathering in central London to celebrate the launch of Firefox 3, and the Guinness World Record feat. The event was organized by our friends at Glaxstar.

It’s wonderful to finally have this official document – a great accomplishment for our community and one that we can all be proud. Thank you and Well Done!