2012 was an incredible year for Mozilla. We mobilized. We did a better job than I have ever seen us do identifying the places where we needed to have impact, and then we focused and delivered. There’s a lot for us all to be proud of in 2012; I’ve gathered up a few of my favourites.

On desktop, we found our mojo again. We streamlined and we upgraded. Our performance and memory teams did incredible work. We shipped a stellar array of new tools for Web  developers. We passed 3 billion Firefox Add-on downloads and we shipped in 89 languages. And with our recent introduction of the Social API and Facebook Messenger integration, we’re evolving at the speed of the Web. The Firefox of today is significantly better than the Firefox of a year ago in every way, and we’re seeing that recognized in our formal feedback channels, and in comments from strangers when they see a Firefox t-shirt.

On Android, we listened to our users. We rebuilt Firefox from the ground up, and we delivered something really excellent. The performance of the browser is incredible and we didn’t sacrifice any of the power of the engine to do it. In fact, we’ve expanded our reach by optimizing our performance to run on lower-powered ARMv6 devices as well. Our users are telling us we got this one  right, with week over week ratings in the Firefox OS is palpable, and the distance we’ve come in a year is extraordinary. Together with our partners, the Firefox OS team is building the world’s first Open Web Device, and along the way  we’ve introduced nearly 30 new Web APIs to bring the power of mobile apps to the open Web.

Finally, we’ve strengthened our voice as advocates for user sovereignty and champions of the Web.  More than 19% of Firefox for Android users, and 8% of desktop users have enabled Do Not Track, proving to the world that there is a real user appetite for choice on issues of Web privacy. Our blackout campaign to oppose US SOPA legislation reached over 30 million people and we regularly work with standards, regulatory and legislative groups to represent user needs and Mozilla values. We also empowered and activated the citizens of the Web with projects like developers, engineers, students, artists, entrepreneurs – to make and build the world that we want based on this amazing, open, transparent, powerful and humbling thing we call the Web. 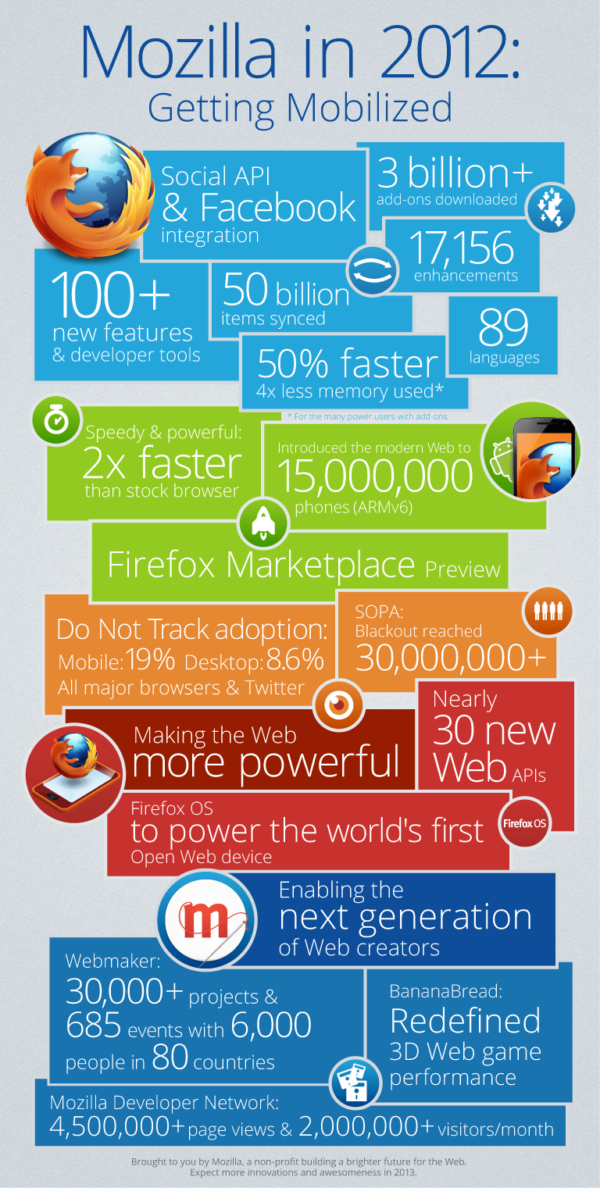