Editor’s Note: I’d like to share a guest post from Ronaldo Lemos and Bruno Magrani of the Center for Technology & Society at FGV Law School, Rio de Janeiro, Brazil. 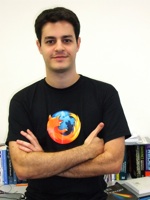 Next week, Mozilla will participate in the 9th Fórum Internacional do Software Livre (International Free Software Forum – FISL) in Porto Alegre, Brazil. This is the second time that Mozilla will be in Brazil on an “official” visit. This time, the group includes Mitchell Baker (Mozilla’s Chairperson), Chris Blizzard, Marcio Galli, Mary Colvig, Taras Glek and Chris Hofmann. In their visit, they will be in touch with a vibrant and growing community of free software users, developers and enthusiasts. This is a great opportunity both for Mozilla and for the Brazilian community to get together and work with Firefox and other initiatives that promote the core values of the net, including openness and freedom.

Ronaldo Lemos and I have been helping support Mozilla’s presence here in Brazil and at FISL.  This is not the first time that our institution, the Center for Technology & Society at the FGV Law School in Rio de Janeiro has participated in the Forum. We’ve worked closely with FISL in the past few years and we launched the Brazilian branch of the Creative Commons project at the Forum in March 2004. This was an unforgettable event, I believe both for us, and for the more than 1,500 participants attending the launch, anxious to hear Minister Gilberto Gil, Marcelo Tas, Terry Fisher, Lawrence Lessig, Luis Nassif, André Midani, Claudio Prado, Joaquim Falcão, and so many others who care a lot about the future of the internet. A video of the launch can be watched their workshop. We are very honored to do this, especially because we believe Mozilla will find in Brazil a place where not only we share common values, but also, put them into practice, thanks to our natural “tropicalist” mindset, and to the fact that the meaning of “openness” is very strong for us. One symbol of that is the fact that President Lula is expected at the Forum this year, and Brazil is well-known worldwide for its support of free software and free culture. Without further ado, we look forward to a great conference and Mozilla visit!


Was this topic helpful?0% of users found this helpful