Celebrity team lead by Sophia Bush is the winner of $25,000 prize for F Cancer 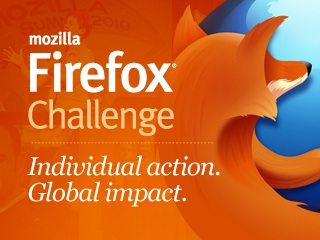 Mozilla is pleased to announce that the Mozilla Firefox Challenge, powered by CrowdRise, wrapped up last night and raised more than $680,000 by thousands of people around the world for social and humanitarian causes, turning individual action into global impact.

Mozilla builds products, like Firefox, that put users in control of their online experience and shape the future of the Web — not for profit, but for good.  As part of our commitment to make a difference in the world, we set out to get everyone in the spirit of doing good.

We brought together 12 cause-minded celebrities, and started each team with a $5,000 donation and  then invited the world to take part by donating to a celebrity’s cause or fundraising for their own cause.

The cause that raised the most money during the challenge would receive an additional $25,000 donation from Mozilla.

Sophia Bush, actress, director and spokesperson, will be claiming that prize for raising more than $110,000 for F Cancer. F Cancer has set out to educate everyone to recognize crucial early warning signs of cancer and inspire them turn around and spread the word to loved ones who may be at risk.

Mozilla would like to extend our congratulations and sincere gratitude to all participating individuals and organizations that made the Mozilla Firefox Challenge a major success. Thank you all for helping us do a world of good.