Montreal police suggested those who wait until after the 8 p.m. curfew to move their cars out of the path of snow-clearing vehicles could face a ticket. Continue reading →

After 25 centimetres of snow blanketed Montreal this weekend, the city has now begun to clear it all away from streets and sidewalks.

Over 3,000 workers are involved in the massive undertaking, which the city expects to end on Thursday.

This is the region’s first snow-removal operation since the imposition of Quebec’s nightly curfew to battle the COVID-19 pandemic’s second wave in the province, and in a tweet posted Sunday afternoon, Montreal police (SPVM) suggested those who wait until after 8 p.m. to move their cars out of the path of snow-clearing vehicles could face a ticket.

Officials say residents who find their street lined with orange “no parking” signs will be able to use over 8,000 municipal parking spaces, made available starting at 3 p.m. each day.

With temperatures set to plunge well below freezing over the coming days, Sabourin added that efforts are being made in parallel to snow-removal to ensure sidewalks stay free of pesky ice.

“We’re spreading salt and little rocks on the sidewalks,” he said. “We know that the freezing temperatures are coming, so it’s important to secure the move, not only for drivers, but for pedestrians too.”

Meanwhile, in a winter made lonelier and more isolated for many by the COVID-19 pandemic, a snowfall like the one Montrealers woke up to this weekend is an opportunity to surround yourself with enough smiles that, were they not drawn onto the inanimate faces of snowmen, could have been been mistaken for an illegal gathering.

The particularly-dense snow that has draped the island is the ideal consistency for building things, whether snowballs or snowmen. 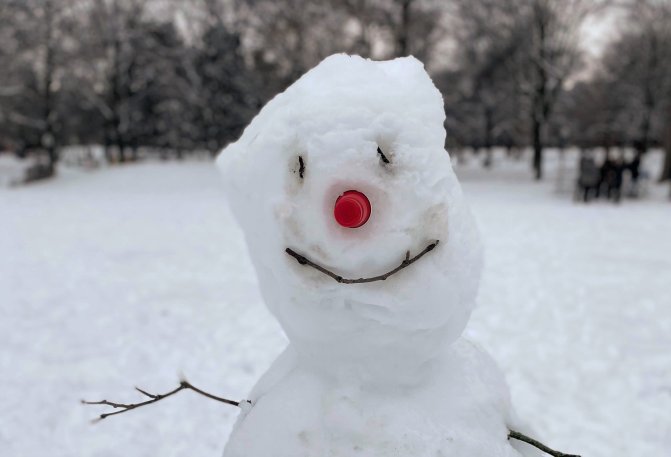 A cursory glance at parks, back yards and sometimes even street corners across the city indicates that a great many Montrealers all opted to build themselves a friend that couldn’t either catch the novel coronavirus from them, nor pass it on to anyone else: at Westmount Park alone, at least fourteen freshly-built snowmen dotted the landscape as far as the eye could see.

One mother and daughter, recent immigrants from China, said they had never built a snowman before, and said she loved the experience. “We really enjoyed the day.”

Elsewhere on the island, one woman even had an idea to bring the smiling, if silent, social comfort of a snowman to some of those hardest-hit by the health crisis that has gripped the city for months: long-term care (CHSLD) residents.

Around twenty photos have surfaced of snowmen constructed by locals to face the windows of residents of West Island CHSLDs, including the Kirkland Manoir and the Wellesley in Pointe-Claire.