July was a hot month.

And I’m not talking about the temperature our side of the globe.

It’s the WordPress community that’s been on fire for weeks in a row, as Matt Mullenweg and Chris Pearson had a “small” conflict that turned into a very controversial and popular topic among the WordPress people.

It’s even got its own hashtag – #wpdrama.

And we’ve been paying attention just like the rest of the community. So:

What you’re reading here is a special edition of our series – This Month in WordPress w/ CodeinWP – the monthly roundup of news related to WordPress. This month, we’re making the report 100% #wpdrama exclusive.

See the most important articles, comments, and tweets that tell the story of this year’s Mullenweg vs. Pearson battle.

The news that started the fire

Automattic wins the fight over the Thesis.com domain, which started in late 2014, and has turned into a process somewhat like the Cold War. Summing up: 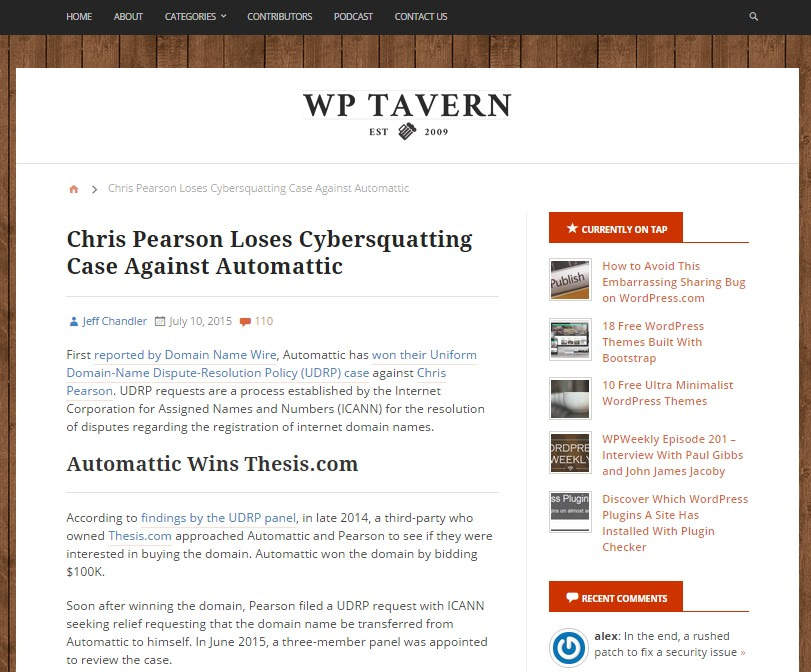 And this is how #wpdrama begins. On June 16th 2015, Automattic advanced a petition with the United States Patent and Trademark Office to cancel the trademarks owned by Pearson: DIYTHEMES, THESIS THEME, and THESIS.

Pearson tells his side of the story

The way things were unfolding compelled Chris Pearson to write a rather long post on his blog, where he discussed the entire story, along with some aspects of it that were not common knowledge up to that point.

In the post, Pearson talks about his motives and his reasoning behind the decisions he’s made along Thesis’ lifespan.

He also tells the story of releasing Thesis for a fee, and as a result seeing Mullenweg disagreeing and pointing out that big portions of Pearson’s work hold code copied from WordPress, which therefore makes the whole project GPL by definition (as it derives from WordPress). 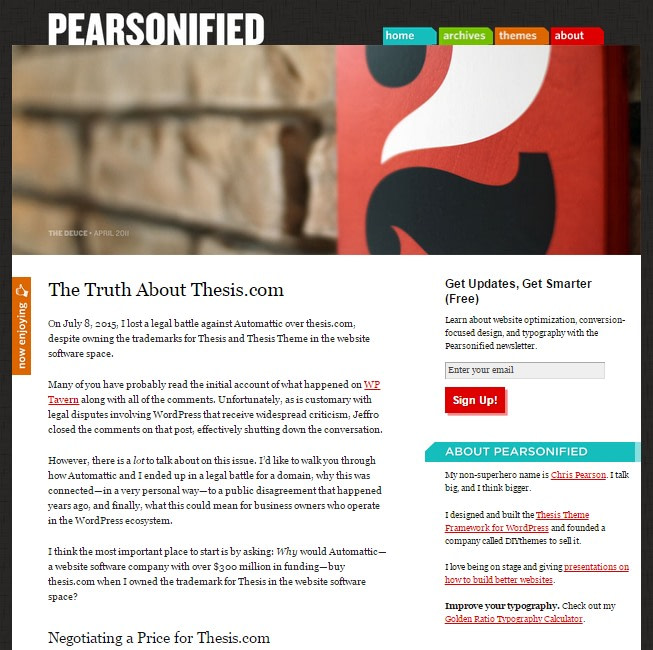 Pearson also discusses the story of the Thesis.com domain’s acquisition in great detail and how it all played out on a timeline (who did what and when).

Mullenweg didn’t miss the opportunity to reply to Pearson’s article, and a long and fierce debate started. 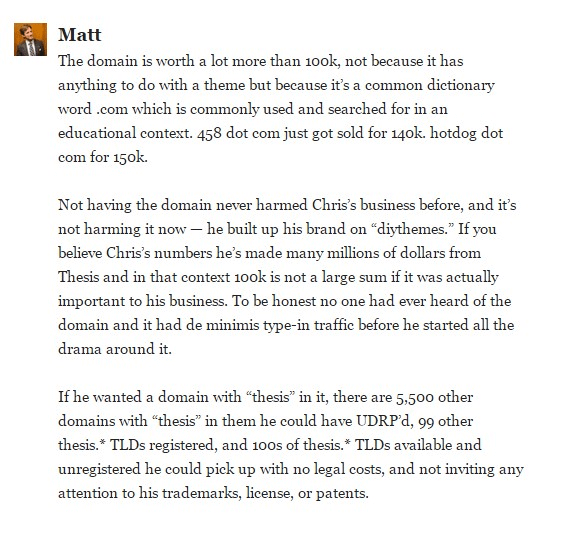 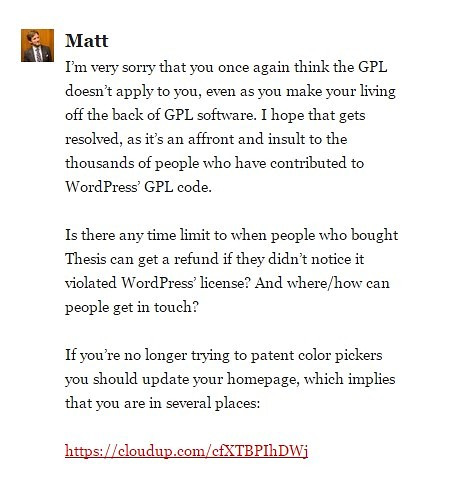 Tons of comments and conversations sprouted from this controversy (it’s actually where the hashtag #wpdrama was born):

The Oxford drama: An optional drama before or after any mention of WordPress. (A bit of #wpfun with #wpdrama) pic.twitter.com/002ncBe96x

#wpdrama is fun. but I'm not good at it yet. it's very similar to trolling right?

Woah. All this #wpdrama hashtag stuff really has me confused. I had NO CLUE people were this passionate about Windows Phone. #wrongWPdangit

Larry is the only winner #wpdrama

If a fraction of the energy spent by people on #wpdrama was spent on testing WordPress trunk, we would have better software.

This might be the first time I’ve legitimately doubted the inherent goodness of the WordPress “powers that be”. #wpdrama

The early beginnings of the rivalry 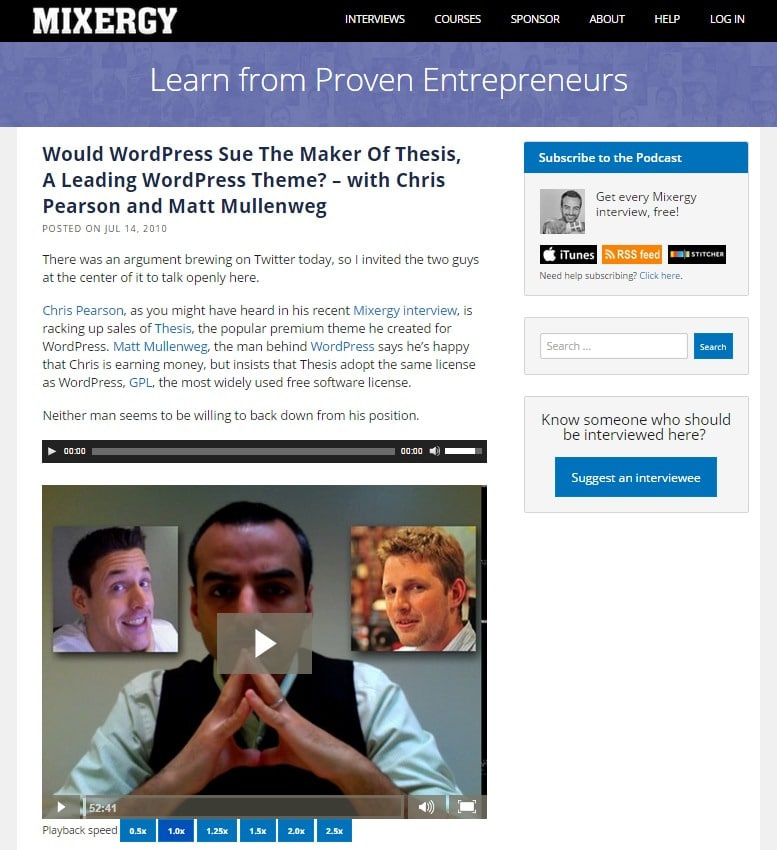 Would WordPress Sue The Maker Of Thesis, A Leading WordPress Theme? – with Chris Pearson and Matt Mullenweg

Matt Mullenweg and Chris Pearson first clashed directly back in 2010 as part of an interview conducted by Andrew Warner of Mixergy.

TL;DR: Mullenweg points out that what Pearson is doing violates the license and is disrespectful to thousands of people who built WordPress, while Pearson insists Thesis theme is his personal protected work and he doesn’t want to cede this right by going GPL.

Watch this interview if you’re into thrilling discussions and have some popcorn ready.

And how was your #wpdrama experience?