Introducing ‘Stealing Ur Feelings,’ an Interactive Documentary About Big Tech, AI, and You

‘Stealing Ur Feelings‘ uses dark humor to expose how Snapchat, Instagram, and Facebook can use AI to profit off users’ faces and emotions

An augmented reality film revealing how the most popular apps can use facial emotion recognition technology to make decisions about your life, promote inequalities, and even destabilize democracy makes its worldwide debut on the web today. Using the same AI technology described in corporate patents, “Stealing Ur Feelings,” by Noah Levenson, learns the viewers’ deepest secrets just by analyzing their faces as they watch the film in real-time. 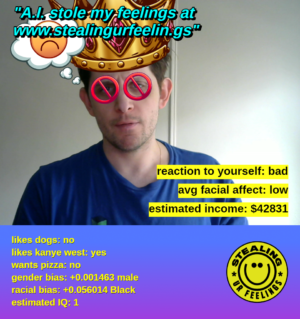 Viewer scorecard from ‘Stealing Ur Feelings’

The six-minute documentary explains the science of facial emotion recognition technology and demystifies how the software picks out features like your eyes and mouth to understand if you’re happy, sad, angry, or disgusted. While it is not confirmed whether big tech companies have started using this AI, “Stealing Ur Feelings” explores its potential applications, including a Snapchat patent titled “Determining a mood for a group.” The diagrams from the patent show Snapchat using smartphone cameras to analyze and rate users’ expressions and emotions at concerts, debates, and even a parade.

The documentary was made possible through a $50,000 Creative Media Award from Mozilla. The Creative Media Awards reflect Mozilla’s commitment to partner with artists to engage the public in exploring and understanding complex technical issues, such as the potential pitfalls of AI in dating apps (Monster Match) and the hiring process (Survival of the Best Fit).

“Stealing Ur Feelings” is debuting online alongside a petition from Mozilla to Snapchat. Viewers are asked to smile at the camera at the end of the film if they would like to sign a petition demanding Snapchat to publicly disclose whether or not it is already using facial emotion recognition technology in its app. Once the camera detects a smile, the viewer is taken to a Mozilla petition, which they can read and sign.

The documentary also generates a downloadable scorecard featuring a photo of the viewer with Snapchat-like filters and lenses. The unique image reveals some tongue-in-cheek assumptions that the AI makes about the viewer while watching the film. These include the viewer’s IQ, annual income, and how much they like pizza and Kanye West.

“Stealing Ur Feelings” has screened at several distinguished film festivals and exhibits in recent months, including the Tribeca Film Festival, Open City Documentary Festival, Camden International Film Festival, and the Tate Modern. Later this year, the film will screen at Tactical Tech’s Glass Room installation in San Francisco. The film has already been inducted into MIT’s prestigious docubase and praised by the Museum of the Moving Image.

“Facial recognition is the perfect tool to extract even more data from us, all the time, everywhere — even when we’re not scrolling, typing, or clicking,” said Noah Levenson, the New York-based artist and engineer who created “Stealing Ur Feelings. “Set against the backdrop of Cambridge Analytica and the digital privacy scandals rocking today’s news, I wanted to create a fast, darkly funny, dizzying unveiling of the ‘fun secret feature’ lurking behind our selfies.” Levenson was recently named a Rockefeller Foundation Bellagio Resident Fellow on artificial intelligence.

“Artificial intelligence is increasingly interwoven into our everyday lives,” said Mark Surman, Mozilla’s Executive Director. “Mozilla’s Creative Media Awards seek to raise awareness about the potential of AI, and ensure the technology is used in a way that makes our lives better rather than worse.”