Hyper Scape primer: All about the real and virtual worlds of 2054

Clear some time on your schedule this weekend and drop into the world of Hyper Scape, the fast-paced free-to-play battle royale whose Season 1 just launched on PlayStation 4. In Hyper Scape, 99 players – either solo or in teams of three – compete in Crown Rush and drop into the completely urban map of Neo Arcadia to see who can secure victory. Matches are won by either being the last squad standing, or by securing and holding onto the crown for 45 seconds, ensuring that Hyper Scape matches end with just as much action and energy as they start with.

Building your loadouts and looting the battlefield works a bit differently in Hyper Scape. You’ll drop into the map with nothing but a melee weapon, and will scramble to loot two weapons and two hacks to fill out your loadout. Hacks are game-changing abilities that can dramatically affect the way you play by letting you do things like teleport, leap into the air and slam down, drop a homing mine, put up a towering wall, and much more. Hacks can be swapped out with others that you find at any time to suit your needs and adapt your play style on the fly. Any time you pick up a duplicate hack or weapon, you’ll fuse those items and make them even stronger. Fuse something four times, and you’ll unlock the most powerful version of it, which boasts an extra buff to help give you an edge in combat. 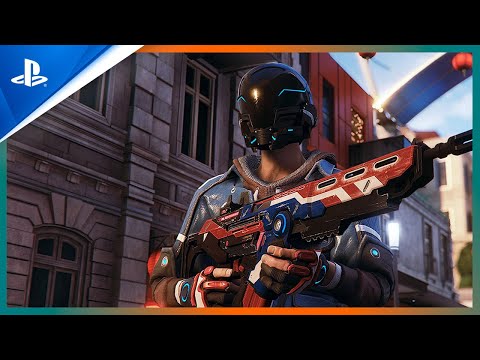 Should you end up on the wrong end of a fully fused shotgun, take heart: dying isn’t the end in Hyper Scape. When playing on a team, once you’re eliminated, you become an echo. You’ll still be able to roam around the map, scouting and pinging items and enemies for your surviving teammates. To be brought back, you’ll have to be revived by a teammate at a restore point, which you can find at a location where an enemy player has been eliminated.

If you really want to master the Hyper Scape, you’ll have to drop in yourself and start playing. But if you want to know more about the universe of Hyper Scape and the world of 2054, then keep reading to learn more from Jesse Scoble, lead scriptwriter on Hyper Scape.

What’s the state of the world in Hyper Scape, and how did the world get to that point?

Jesse Scoble: For the upper 1% of billionaires and trillionaires, the world is idyllic. Most of their money comes from stock markets and inheritances. They live in gated cities catering to their every whim. They own the megacorporations – like Prisma Dimensions – that run the world. The rich have gotten richer, while the middle class now has almost ceased to exist.

However, for most people in the world, climate change, mass migration, automation of much of the workforce, and failing infrastructure and social services have created a rough day-to-day existence, painted in dayglo neon graffiti. The lucky ones – such as they are – work for megacorporations, and make enough to survive, but not much more. 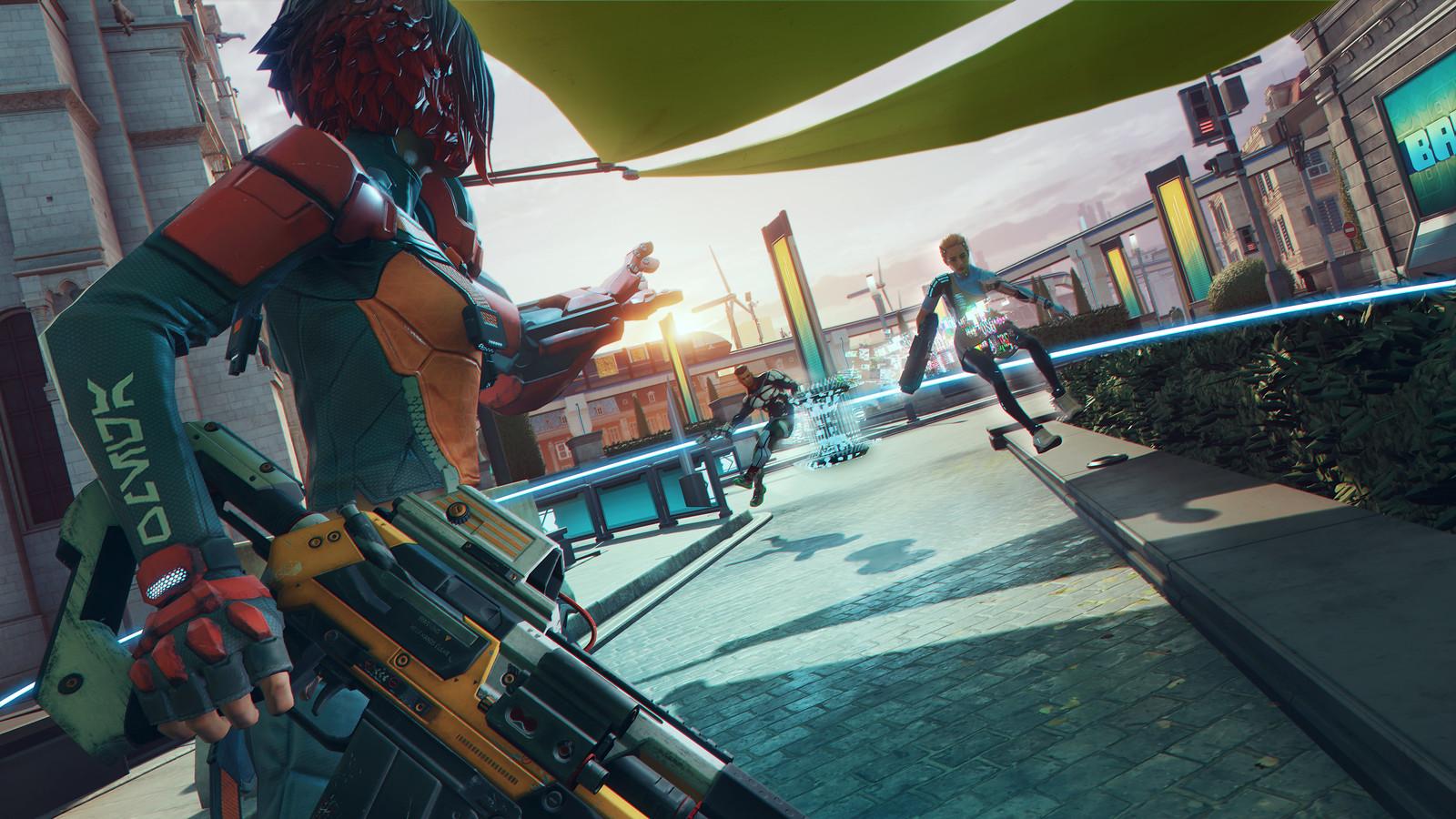 What is Prisma Dimensions?

JS: Prisma Dimensions is a multinational conglomerate that is, arguably, the most powerful and most important company in the world of 2054. What began as a biomedical company focused on neurological connective technologies has become the hub of virtual connectivity, giving the world access to unprecedented opportunities for education, remote work, social connections, and entertainment.

Prisma Dimensions is headquartered in Paris, and was founded by Mathieu Eiffel, the inventor of the B-Link, and his partner, CEO Dr. Ivy Tan.

Why did they invent the Hyper Scape, and what is its purpose?

JS: The Hyper Scape is an evolution of the internet – it is a fully-simulated virtual reality accessed via direct neural connection (the B-Link 2.0), that allows its users to work, learn, and play in unprecedented fashion.

Prisma Dimensions has enabled a brand new economy to flourish­. Remote work is now the same as being there, no matter how far apart one may be in the real world. And entire new sectors have cropped up around avatar customization, the trappings of virtual sports, and so forth. 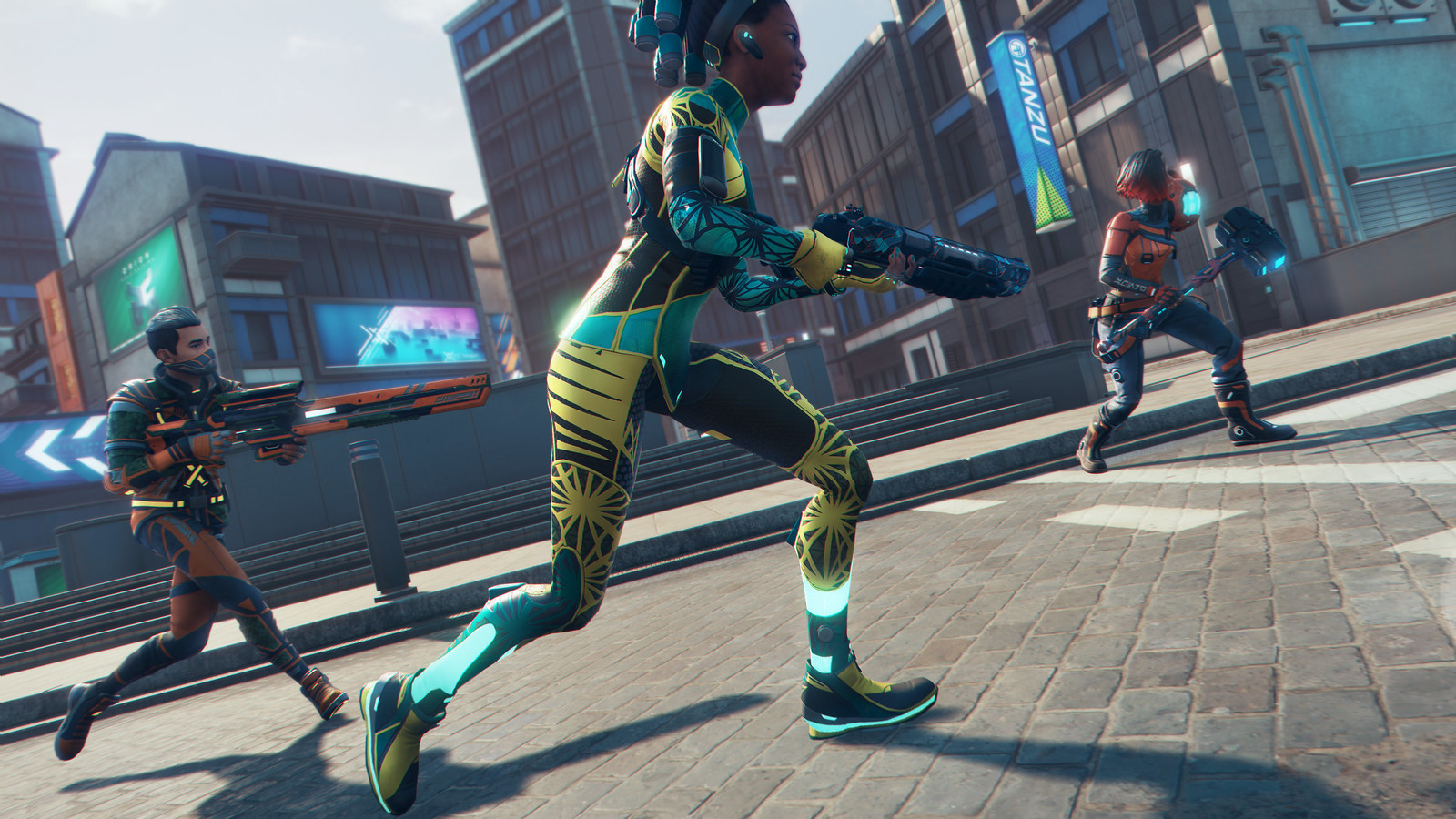 How did Crown Rush emerge as such a popular game? Is there an audience? A fanbase? Popular champions?

JS: Prisma Dimensions developed Crown Rush in part as a learning tool to help new users calibrate their virtual reality experience, but also as a competitive spectacle. It is a fusion of popular sports entertainment with the accessibility of gaming – when everyone can participate, anyone can become a champion! As such, it is enormously popular, and fans are flocking to support burgeoning champions.

Is Neo Arcadia reflective of the world in 2054, or is it a fantasy for competitors too?

JS: The virtual city of Neo Arcadia is a vision of a utopia, initially created and conceived of by Prisma’s founder, Mathieu Eiffel. But, of course, it’s been modified and iterated on by countless hardworking developers in Prisma’s World and Game divisions.

In the fiction of 2054, it’s important to note that there are, in essence, two Neo Arcadias, though they mirror each other. One is a virtual hub where shopping, hanging out, dining (the brain is tricked into tasting food, but of course no calories or nourishment are consumed), working, studying, partying, and so forth occur. The other is an instance where the Crown Rush matches happen. The two are segregated with strict rules governing what can and can’t be done in each environment.

Players can choose from a wide variety of characters when playing. Who are the people who compete in Crown Rush? What are their motivations?

JS: Crown Rush appeals to contenders from all parts of the globe, and all walks of life. For example, Nahari Martin is an up-and-coming journalist who plays in part because she knows THIS is where the action is, and she’s skeptical of some of Prisma Dimension’s “building a better tomorrow” messaging. Her girlfriend, Thea “Prodigy” Jepsen, is a top neurologist at Prisma, and she plays in order to see the B-Link in action.

Then we have gamers like Ace, Paladin, and Basilisk, who all dream of making it big as the next star of Crown Rush; Ace is a confident and competitive hotshot who believes he can make it to the top; Paladin loves the idea of winning the Crown Rush lottery and improving life for his mom and younger sister, but he knows it’s a daydream; and Basilisk wants to prove to his parents — and to the world at large — that he is more than anyone expects. He knows he’s great, and he’s just waiting for the world to catch up to him. 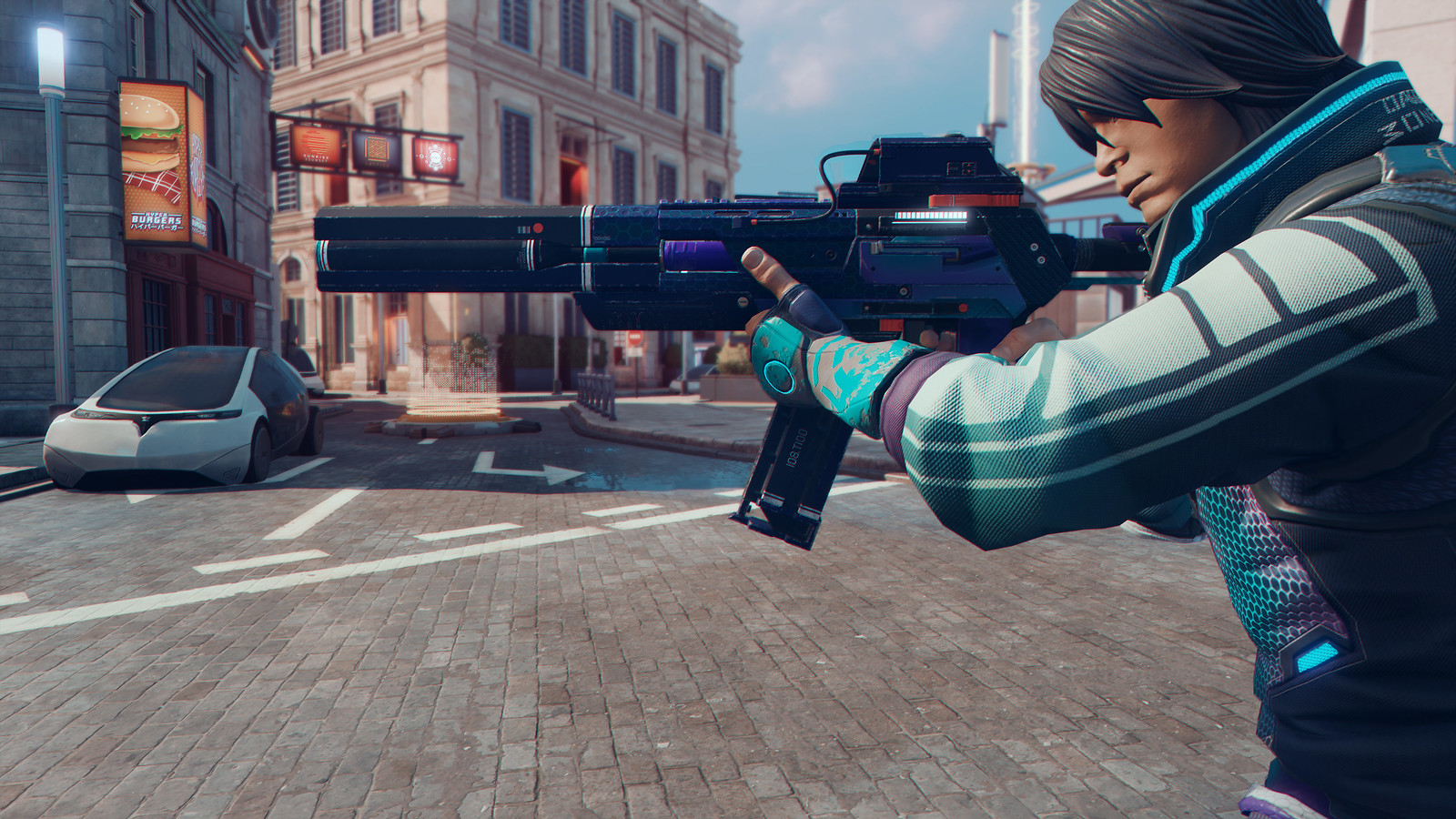 And we have many other faces – such as the casulinks, or more casual players, who may love Crown Rush and the Hyper Scape as much as the potential champions, but tend not to play as competitively. They are more in it for the fun. Characters like Myrto, a single mother of two and hardworking investment banker who got into the game to play with her kids, but has continued to play to blow off steam and because she enjoys the company she’s met, such as Burns. Burns is a professor who checked out Crown Rush because of his students, but has stayed because he’s found recent companionship playing in a squad with Myrto. Or Noor, a fashionista streamer who uses it to build up her fanbase. 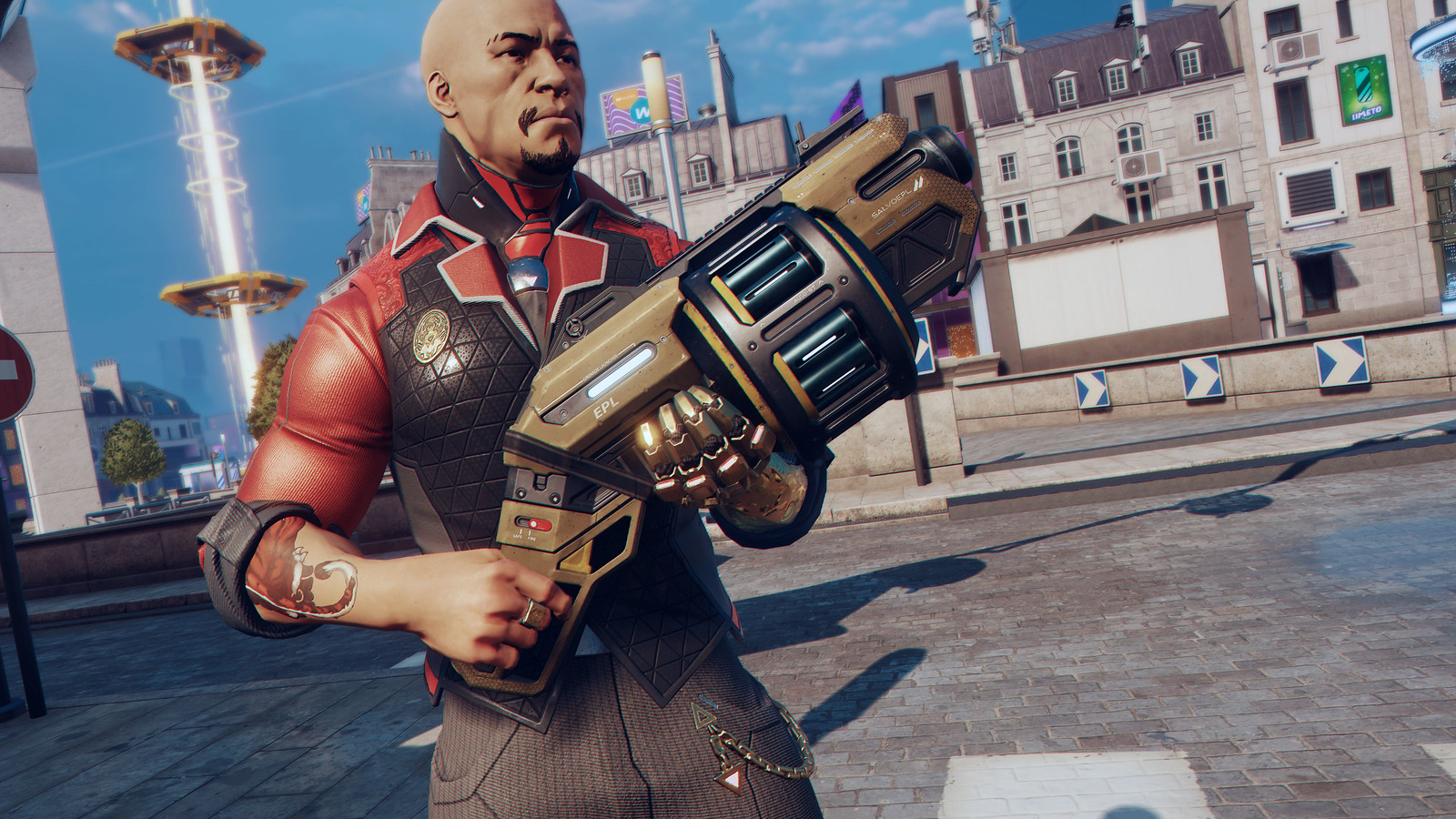 We’ve seen in a trailer that there seems to be something wrong happening in the Hyper Scape. Can you tell us more about that?

JS: Prisma Dimensions would like to reassure you that everything is perfectly operational in Hyper Scape. As a living game environment, the developers want to constantly test out new ideas and evolve the landscape. These hacks, as the players call them, were of course created intentionally and introduced into the game as a surprise element. Reports to the contrary are nothing more than idle rumors, and are best ignored.

When and how will we find out more about the world of Hyper Scape? 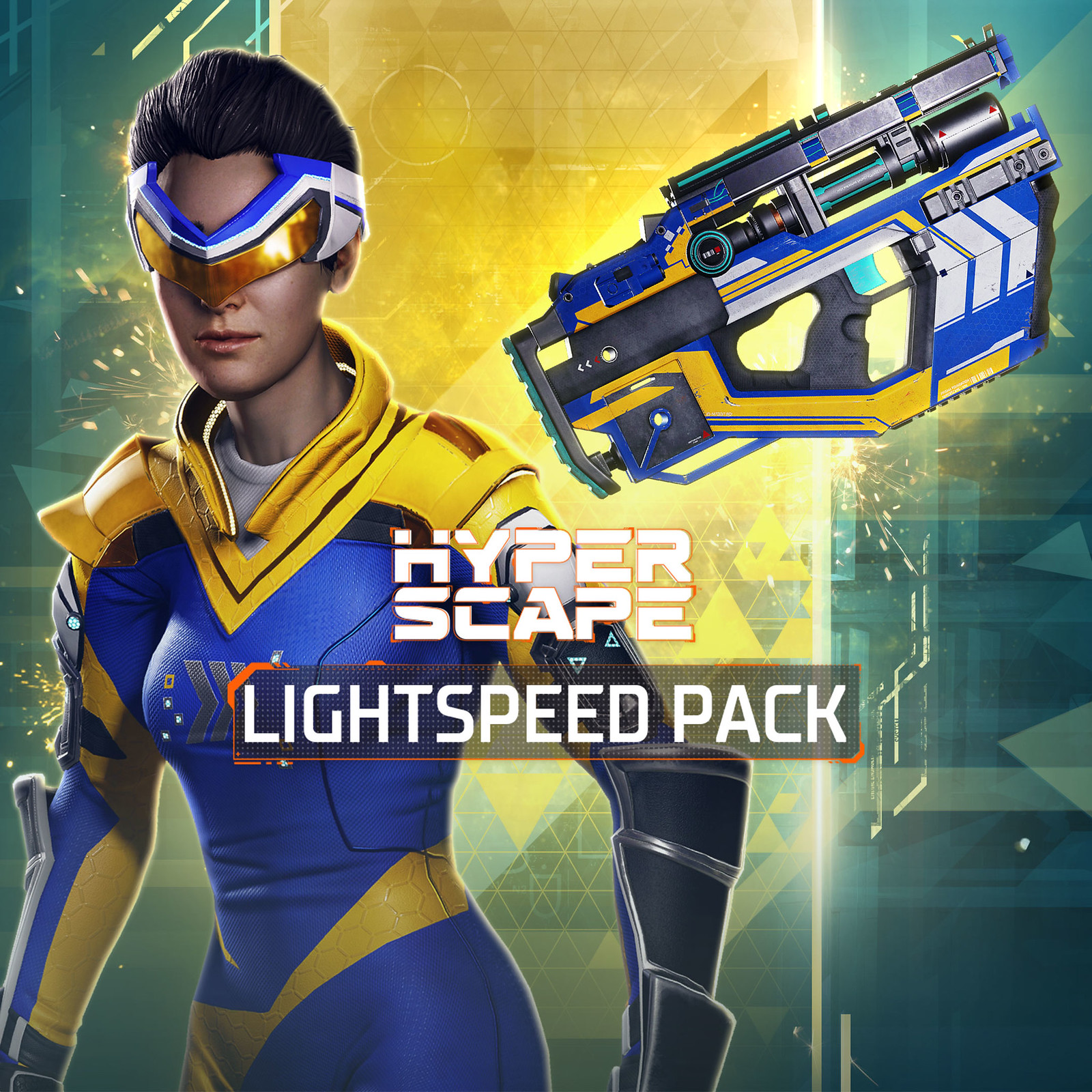 PlayStation Plus players have access to additional in-game items. What exactly are those?

JS: For PS+ players, we have created an alternate outfit for Cruze, a Chilean pilot who works for Verdigris Transit. Although something of a loner, she has a rich imagination, and often loses herself in genre stories. She’s a fan of a popular superhero series of 2054, and creates fanfiction stories where she envisions herself as “Lightspeed.” The Lightspeed Champion Outfit and Komodo Weapon Design come out of that.

This pack will only be available during Season 1. Full details here.

Eclipse is a first-person exploration game set on a sentient planet with a dark past. Crash-landing, you awake to find yourself in a dreamscape environment, littered with the remnants of a failed civilization. It’s a world filled with discovery and w...

Ever since Horizon’s debut at PlayStation’s E3 2015 Showcase, Guerrilla Games has been steadily working towards its vision of a sprawling open-world action RPG set in a futuristic Earth ruled by towering machines.