How Much Does a VPN Cost? And Are VPNs Safe? 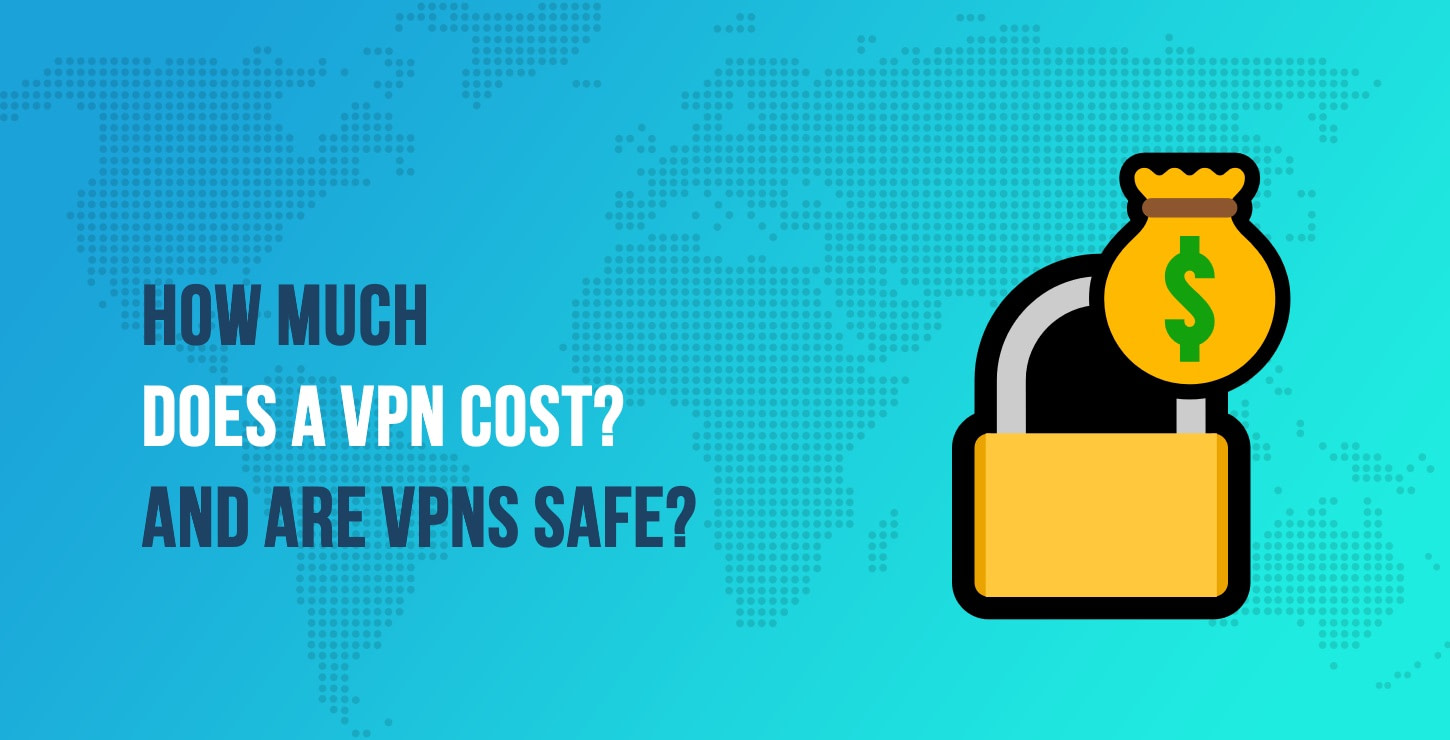 How much does a VPN cost, and is it safe to use a VPN? Those are the two key questions we’re going to answer in this article.

By the end, you should understand what makes a VPN safe, as well as how much you should expect to pay for a quality VPN service.

We’ll also leave you with some specific service recommendations to get you started.

Are VPNs safe to use? What to look for in a safe VPN

As a technology, VPNs are safe to use…but not all VPN services are safe.

Basically, if you choose correctly, using a VPN is 100% safe, but just because a service calls itself a VPN does not automatically mean that the service is safe.

To understand whether or not a VPN is safe to use, we need to quickly run over what’s actually happening when you use a VPN.

Essentially, a VPN acts as a middle-man between you and the websites or services that you visit. When you visit a website, your VPN encrypts that data before it goes to the website (or even before it goes to the WiFi network, which is why a VPN can help protect you on public WiFi, as well as from snooping ISPs). In addition to a lot of other benefits, this makes it safer to log into WordPress.

In turn, that website or service sees the VPN’s IP address instead of your actual IP address, which gives you anonymity.

If you pick a safe service, that’s all there is to it. But there are some specific things you need to look for when choosing a quality VPN:

Because you route all of your traffic through the VPN, your VPN is in a position to keep track of a lot of what you do.

Now, it’s not like they can see your passwords and the exact actions you take on each site. But they can keep track of which sites you’re visiting, when you connect to certain sites, how long you’re there, how much traffic is passing through, etc.

For example, not only does Mullvad not log your information, they don’t even ask for your personal information when you create an account:

Put simply, a safe VPN is a VPN with a strict “no logging” policy.

Understand who owns the VPN and where they’re located

For example, if you live in the USA, choosing a VPN service located in the USA makes it a lot easier for the US government to exert its will (though the USA is still better than some other jurisdictions because it doesn’t require logging).

For that reason, a lot of VPN services will locate themselves in jurisdictions like Panama or obscure islands like the British Virgin Islands, Nevis, etc.

Beyond considering where a VPN’s owner is located, you’ll also want to consider who the owner is.

For example, in 2013, Facebook acquired a VPN service named Onavo. They didn’t do this to secure the web. Instead, they spent $200 million on the acquisition in order to gather data about visitors’ behavior, like people’s usage of Snapchat, Facebook’s competitor. This is why Apple kicked the Onavo app off the App Store in 2018.

Basically, you want the VPN owner to be dedicated to you as the customer, not your data.

Make sure they’re using the latest standards and patching issues

Implemented properly, a VPN should fully hide your identity and encrypt your data. However, not all VPNs use the proper security standards or promptly fix issues.

For example, the Port Fail flaw in 2015 could lead to VPN users’ IP addresses being exposed.

This flaw was in the underlying protocols, so it’s not the VPN services themselves who were at fault. However, some services were more responsive than others in patching the issue.

In addition to being responsive to issues, a safe VPN should offer features like:

For example, NordVPN offers what they call “military-grade encryption”…which is really just a fancy way of saying AES 256-bit encryption:

You want a kill switch

Even if you’re using a VPN that’s safe in every other aspect, there’s still one big problem:

If your computer drops its connection to the VPN server, you might continue browsing without noticing and, as such, expose your real IP address.

To fix this, a lot of the safer VPN services build in something called a kill switch.

Essentially, this feature will automatically stop your Internet access if your connection to the VPN server drops for some reason. This ensures that you don’t accidentally keep browsing while exposing your real IP address.

Be careful with free VPN services

Here, you have a big case of “you get what you pay for” and most free VPN services are not safe. If they’re not charging you money to use the service, that probably means you’re the product in some way.

That was the case with Hola in 2015, where they got caught selling users’ bandwidth to a botnet.

See, rather than using their own servers like a paid VPN service, Hola is able to offer its free price tag by routing traffic through its users’ computers, in a sort of peer-to-peer VPN situation.

That’s just not a safe approach, and you don’t want your computer’s resources to be used by other people. Or, in the case of Hola, sold off to a botnet.

A good VPN is safe

To recap, a good VPN service is safe, but not all VPN services are good.

To choose a safe VPN service, you’ll want to look for features like:

And you’ll probably want to avoid free VPN services, as they aren’t free out of the generosity of their hearts, and they’re probably monetizing your traffic in some way (like selling your bandwidth to a botnet).

How much does a VPN cost? What you’ll pay for a quality service

Next, let’s get into the question of how much does a VPN cost.

A quality, safe VPN service will usually cost you $5-12 per month if you pay on a monthly basis, or as little as $30-50 per year if you’re willing to pay for a couple years up front. Let’s go deeper…

You can find some free VPN services, but, as we discussed above, these free services can be sketchy. Remember how Hola got caught selling users’ bandwidth to a botnet? Yeah – you don’t want that to be you.

Additionally, you’ll also come across “lifetime deals” for some VPN services. For example, it’s not uncommon to find offers on deal sites that grant lifetime access to a VPN service for as little as $50.

While this type of lifetime offer is attractive from a price perspective, you should be cautious in this scenario because, with a lifetime deal, there’s no incentive for the service to continue to provide a good product once they get your money.

This often leads to them overloading their servers, which means these types of VPNs are often a lot slower than services you pay for on an ongoing basis. Additionally, they have no incentive to invest in improvements and security updates since they’ve already gotten all the money they can get out of you.

Instead, if you really care about the speed and safety of your VPN, your best bet is to pay for an ongoing service. Yes, it sucks to pay a little more – but it’s important to remember that you’re not paying more for nothing.

Basically, you want a VPN service that has an incentive to keep providing great speeds and safely handling your data…and the only way to get that is to pay for it.

So – how much does a VPN cost that will do that?

Typically, you’re looking at around $5-12 per month if you pay on a monthly basis (I’ll show you a comparison of some popular services below).

However, most VPN services will offer you a hefty discount if you pay for one or two years at a time, which can be a great way to save some money.

They even occasionally run a three-year deal with an even bigger discount: 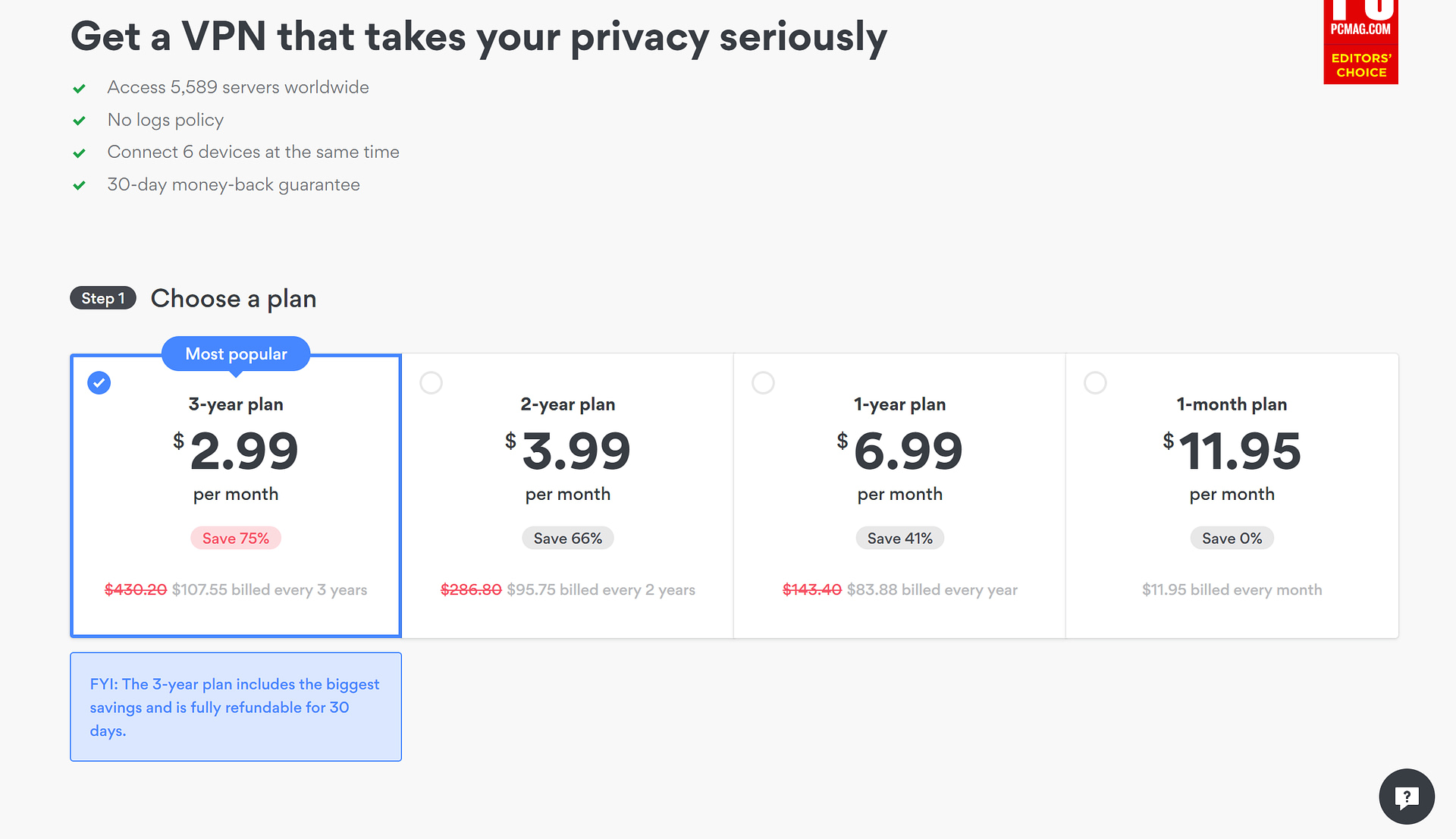 How to pick a safe VPN – what are the best VPN services?

Now for the million dollar question – what are the best safe, affordable VPN services to use? And how much does a VPN cost that’s going to offer you good quality?

If you want the shorter answer, you can check out the comparison table below. All of these VPN services are safe, with Mullvad offering the absolute most privacy if that’s your biggest concern:

And for the best results, pair your VPN with a password manager to keep your logins safe, too!

Still confused by the question of how much does a VPN cost? Still have some safety questions? Ask away in the comments!

Themeisle Redesign: Here’s How It Went and How Much It Cost