0
This is the October 2018 edition of “This Month in WordPress with CodeinWP.”

Hey everyone, we have plenty of WordPress news to share with you this month. First up, Gutenberg is entering the final development phase and is almost ready for its first release candidate version. Beyond that, the official AMP plugin was upgraded and optimized towards a more user-friendly interface, while our own Pirate Forms moved on to become part of WPForms. And if you like dark interfaces, “dark mode” might be coming to WordPress!

But that’s not all. We collected even more awesome resources and in-depth pieces on interesting topics; so do not miss the October 2018 WordPress news with CodeinWP. 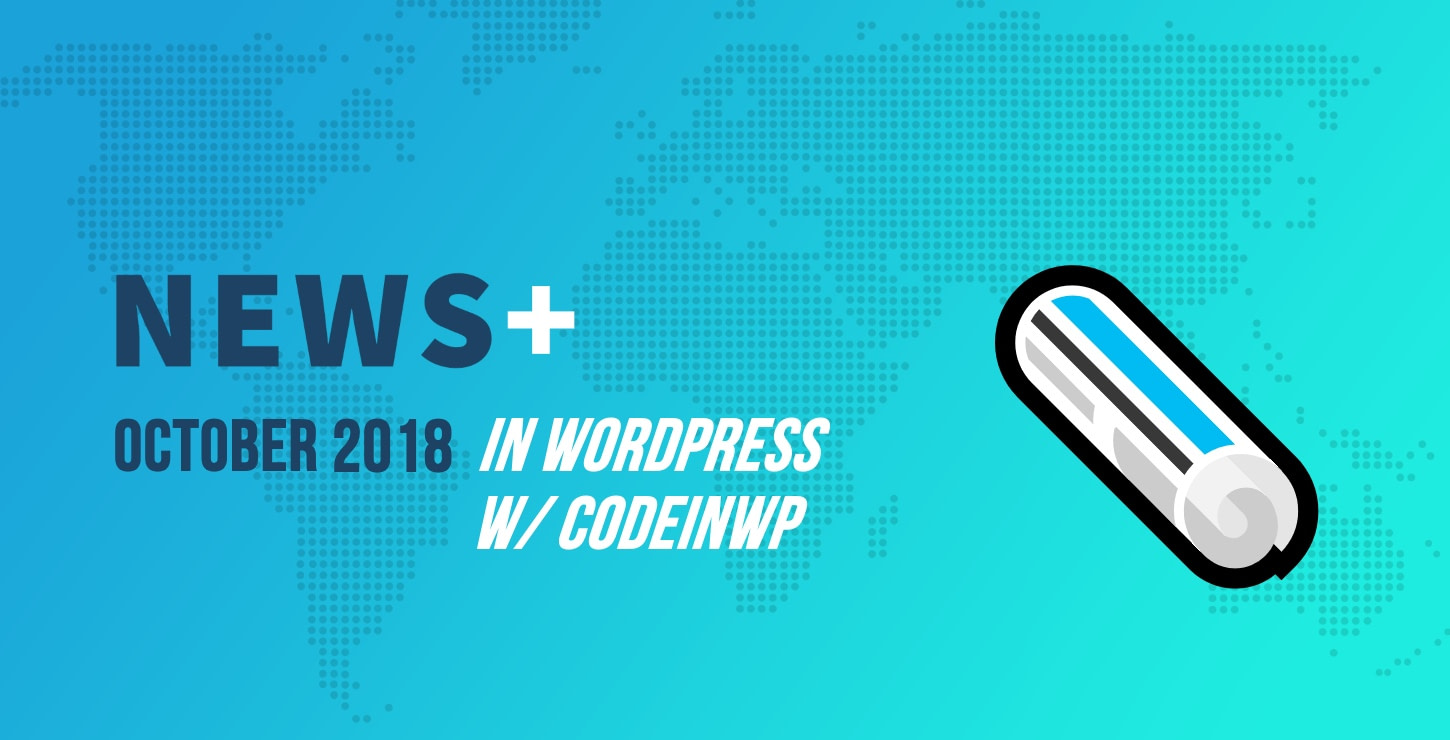 Let’s start the October edition with a short recap of the most recent changes to Gutenberg. The new WordPress editor reached version 3.9, which comes with:

Speaking of Gutenberg, check out this centralized library of individual blocks that you can use to extend the editor’s functionality.

Google’s open-source project AMP (as in Accelerated Mobile Pages) will get significant improvements in the upcoming release. This should be great news because the official WordPress plugin is used on more than 300,000 websites. The new features AMP for WordPress aims to introduce are extended theme support and a more user-friendly settings approach. This re-orientation is essential since, in the first stages, the tool was primarily built for developers, and hence required non-intuitive actions from regulars users.

In the forthcoming version, users can enable native AMP or Paired mode on the settings page; moreover, the beta release adds granular controls for selecting supported templates. And these are not the only changes in the plugin’s functionality.

The 3-year-old tool aims to improve your website’s mobile performance and is used on 25 million domains worldwide (beyond WordPress). We’re using it on this very blog too.
WordPress 4.9.9 Minor Release Roadmap

We have some news about the next WordPress release as well, as the devs in charge of the project published a roadmap for what’s coming soon. While the official launch is set to happen in early November, the beta and release candidate will be out by the end of this month.

WordPress 4.9.9 is the last minor release before the most anticipated of the year, aka the ‘Gutenberg version’. That’s why this next minor release will focus on Gutenberg preparation along with a few other improvements such as bug fixes, better accessibility, internalization, and the Site Health Project. The latter involves “investigating the work remaining for the Serverhappy project and determining how to get it in people’s hands as soon as possible”. Plugin version requirements, WSOD protection, and update dashboard notice are the hot subjects in the pipeline that need to be implemented. 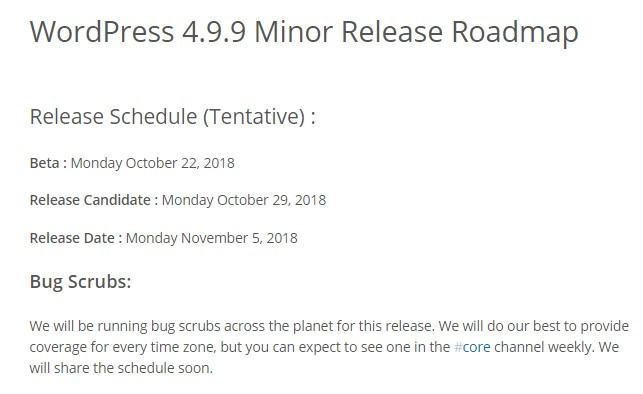 Dark Mode is Possibly Coming to a WordPress Dashboard Near You

In case you weren’t aware, there’s this plugin on WordPress.org called Dark Mode, that makes your dashboard black. WordPress has eight default color schemes, but none of them actually make your admin page completely dark. So if you want to try this new look, you might enjoy this free plugin.

Dark Mode plugin has been developed by Daniel James for over a year now and is currently active on 1,000+ sites. But he didn’t only create this version for enthusiasts, he even proposed the idea of merging the dark mode into future core releases. No one in the WordPress core team approved it yet, nor did they officially announce it, but don’t be surprised if this happens sooner rather than later. By the way, Dark Mode – in its current state – is not compatible with Gutenberg. Just sayin’.
Pirate Forms Is Now WPForms

And finally, some news from inside the house. Our Pirate Forms plugin, a popular and minimalist contact form plugin, won’t be available for download anymore. After long discussions and hard decisions, we thought that letting it go would be the best direction for us.

The plugin isn’t getting abandoned, though. We entered a partnership with WPForms, and they took Pirate Forms under their protective wing.

We felt that we reached the top of the bar in terms of improvement (since it is a minimalist plugin) and also couldn’t invest additional resources to get it to the next level. It was about time to let other developers in and allow them to take the lead, so we can focus on other projects in our timeline.

Great Articles From All Around The Web

To gain domain authority and improve your SEO, both internal and external links are essential. iThemes teaches you the importance of both categories of links and the practices to use them properly.

When a customer registers for your newsletter, you need to greet them with an onboarding email. This welcome email will be the first email that they receive from you so you must be sure it’s a good one. Here are 10 recommendations on how to nail it.

Is the New Chrome Ad Blocker Affecting Your Income? (What to Do)

This is actually a very interesting topic and I guess it concerns most of us since, according to Marketing Land, at least 40% of Internet users in the US have an active ad blocker installed. And there are even more across the world. I personally am guilty as charged. The real question is, are businesses affected by this? Let’s see what Kinsta discovered while doing the research.

The Secret to Learning WordPress Development Is People

If you were to review all the methods to learn code, does the balance lean towards courses/internet or in favor of personal human interaction? How many times did you learn something because a friend helped you? WPShout claims that human-to-human learning has better results than nerding out by yourself.

6 Weird WordPress Plugins and Pranks That are Just For Fun

Now, putting the serious things aside, let’s chill out a bit by presenting you a few WordPress plugins that were built just for fun… and nothing more. If you feel like surprising your visitors with unusual elements popping up while they’re scrolling, or you want to play a prank on somebody, or if you simply love unicorns (we do not judge), check out these free tools. Random log-out, giant cursor, content randomizer, Comic Sans fonts transformer… there are lots of creative ideas. How to Add Rich Snippets to Your WordPress Site (The Easy Way)

Looking good in search engines is something we all should care about. Rich snippets help your site stand out with eye-catching additions to the organic search results. Okay, but how do you add the rich snippets to your site and, importantly, where? The guys at Flothemes will tell you the solution.

How Spam Filtering Works: From SPF to DKIM to Blacklists

We often hear about spam filtering, but how many of us actually know what’s happening under the hood? That is, what causes emails to go to spam? This is the question that the guys at Delicious Brains aim to answer. Blacklists, getting hacked, IP addresses… it’s all explained.

How many images on WordPress is too many? I mean, you might have a dedicated VPN and unlimited disk space, but is it really unlimited? This is an interesting read by ILoveWP.com on how uploading images of various sizes can considerably slow down your website. I mean, where could having thousands of images/files on your server lead to eventually?

How do you start unit testing existing WordPress code?

Is your code not working? Probably one of the problems is that you’re testing it all at once instead of breaking it into pieces and solving one issue at a time. Here’s a nice guide that shows you how to make your code work (and know why it works too).

How to Create a Quora Marketing Strategy for Your Business

There are lots of ways that you can market your site, but did you ever try Quora? At first sight, it might not look like a very appealing platform to promote your brand, but there are actually several ways to make it work your goals. Here’s a comprehensive piece of advice on how to use Quora to its full potential.

That’s it for October 2018. Anything we missed?

#Gutenberg is closer, #AMP gets better, PirateForms joins WPForms - Oct 2018 #WordPress news Click To Tweet Don’t forget to join our crash course on speeding up your WordPress site. With some simple fixes, you can reduce your loading time by even 50-80%:

What Are the Best Fonts for Logos? 10 Steps to Find the Perfect One + 23 Cool Fonts to Start With