Hello once again everyone! This is Zhenzhong (ZZ for short) from miHoYo and I’m super excited to be back with another announcement regarding the release of our latest open-world action RPG, Genshin Impact. Thanks to the support of our dedicated community and the continuous hard work of our development team, we’re thrilled to officially confirm that Genshin Impact will be launching for PS4 worldwide on September 28!

A world waiting to be explored 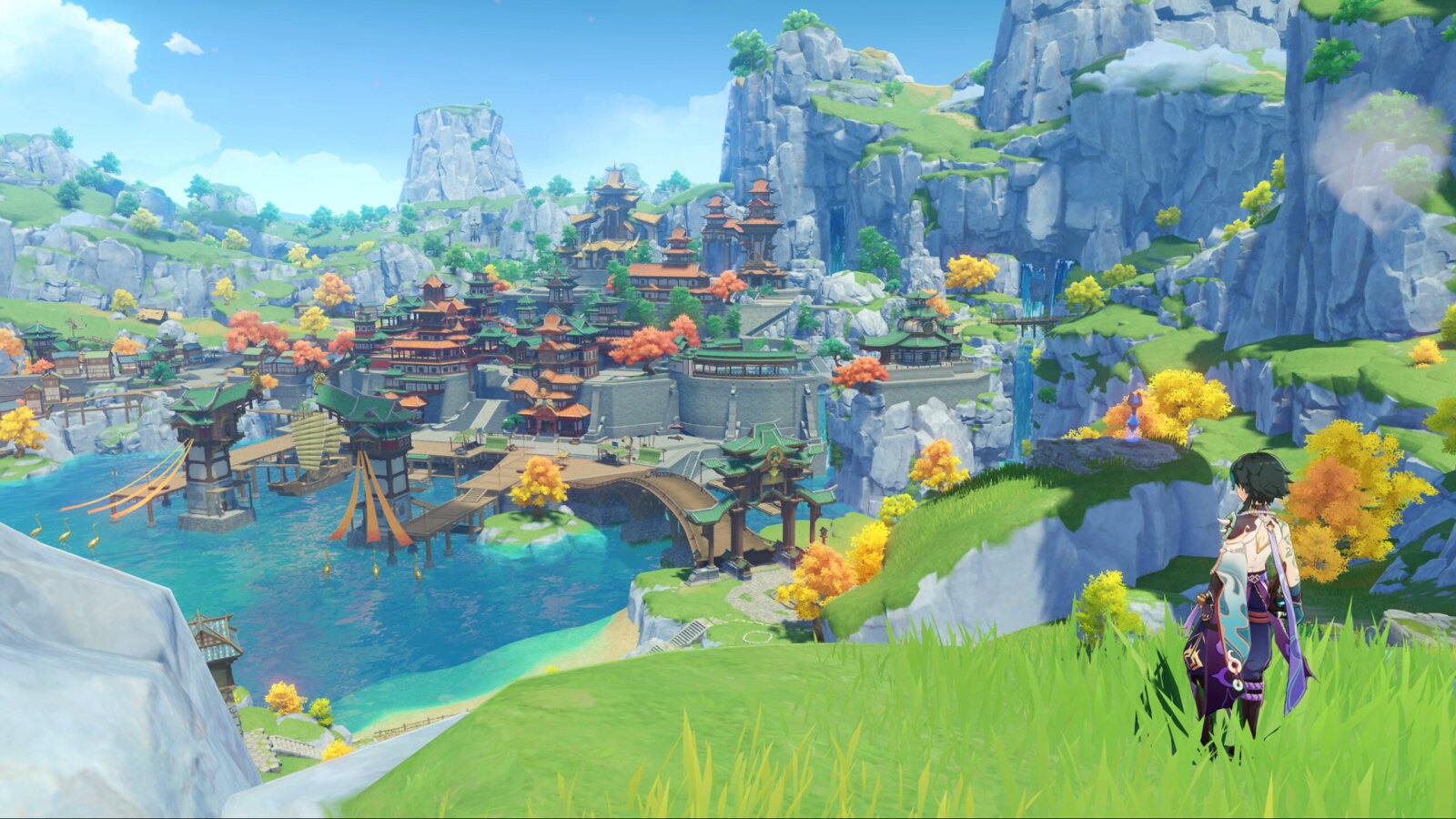 In Genshin Impact, you play as a mysterious being known as the Traveler. After you are suddenly separated from your sibling, you find yourself stripped of your former powers and helplessly stranded in a new unfamiliar world. You have arrived in Teyvat — a fantasy world where the seven elements flow and converge. But you are not alone. Here you will embark on an epic journey to find your lost sibling and unravel the many mysteries of this world, meeting a host of faithful companions along the way as well as powerful enemies who seek to challenge your quest.

This vast open world is yours to explore as you travel to new cities, unlock elemental powers, and uncover the ancient secrets of Teyvat through an immersive story-driven campaign. Whether you revel in completing side quests brimming with lore, challenging dungeons packed with hordes of intimidating enemies, or simply like interacting with your party of unique and fully-voiced characters, Genshin Impact will be a one of a kind adventure with something for everyone to enjoy. We hope that the amazing world of Teyvat will soon become a place full of meaningful stories and memories for you just as it has for us. 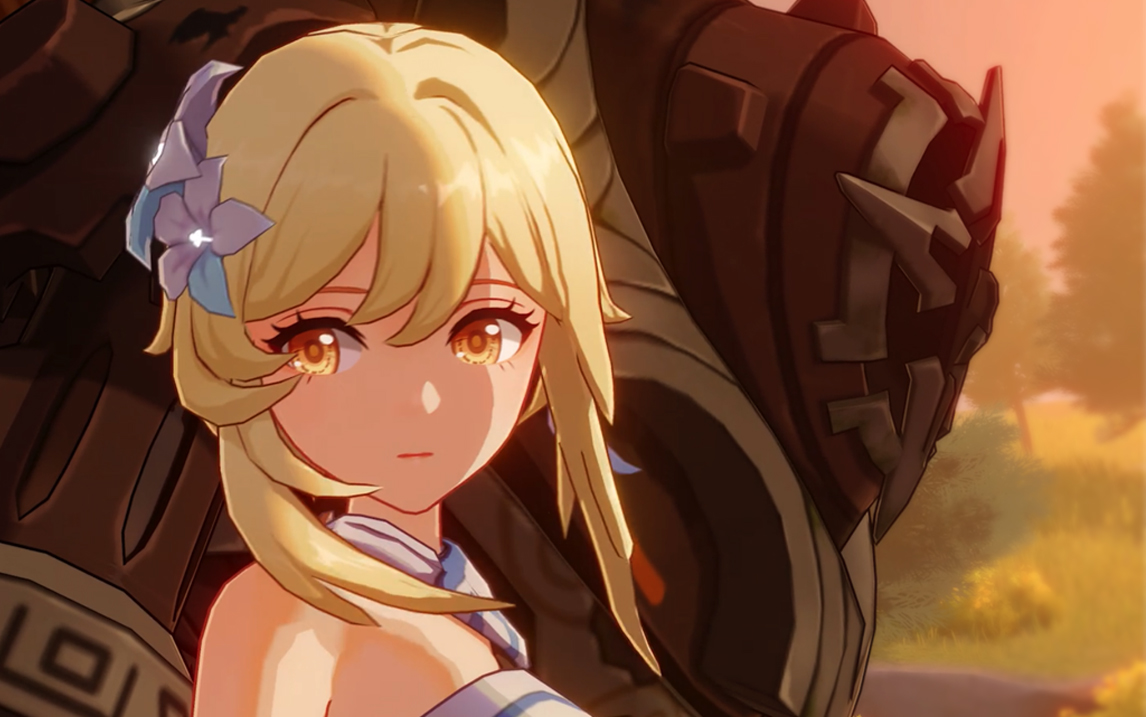 A journey in the making

Our own adventure with Genshin Impact first began over three and a half years ago, and the game’s development has certainly been a journey of its own. Our talented and diverse team of developers here have overcome numerous technical obstacles along the way, whether it was meeting the demands of Genshin Impact’s massive open world, or polishing the mechanics of its fast-paced elemental combat systems. Given that this is miHoYo’s first release on the PlayStation, we wanted to take this as an opportunity to showcase our vision on PS4’s hardware.

To celebrate the release of Genshin Impact on the PS4, we will have some special bonuses for PlayStation players during the game’s launch. PS4 players will have the chance to get the exclusive Sword of Descension and Wings of Descension, as well as more bonuses coming in the future.

The Sword of Descension is an impressive weapon that will prove quite handy at the outset of your adventure. It not only has a chance of dealing additional damage to nearby opponents but also grants a considerable increase to attack damage when equipped on the Traveler, making it the perfect choice for dealing with any pesky enemies you may encounter early on.

The second item is the Wings of Descension, an exclusive stylized wind glider. Your trusty wind glider will help you travel quickly over adverse enemies and terrain, and will allow you to safely navigate heights that would be otherwise impossible. The limited Wings of Descension glider style will be exclusively available to travelers on the PS4.

Cut down challenging foes and soar through the celestial heights — in style! 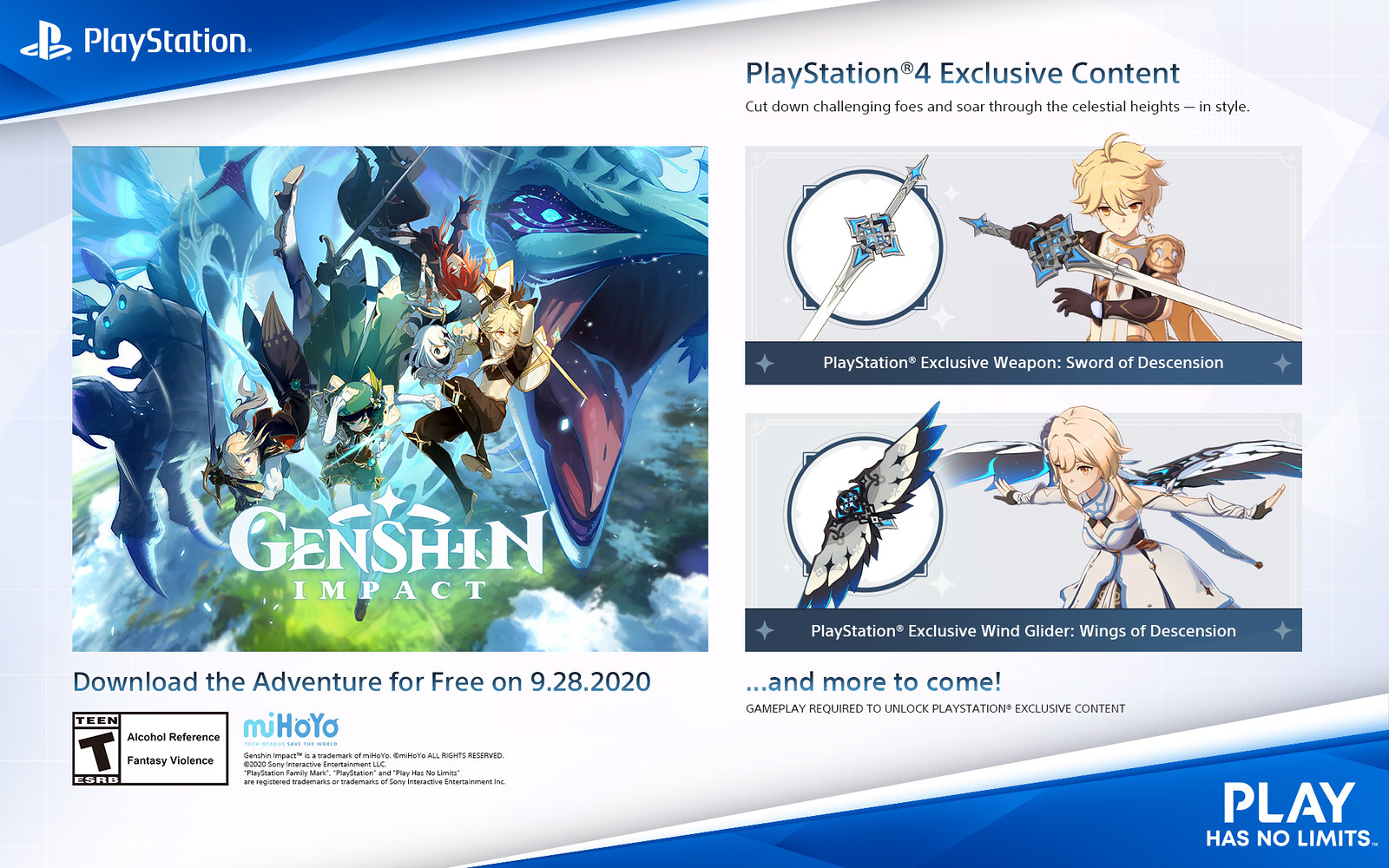 To find out more about unlocking these bonuses, be sure to log in to Genshin Impact at launch, where you will find all the related details.

Finally, in preparation for the launch of Genshin Impact, we have assembled the Adventurer’s Starter Bundle, an exclusive pre-order bundle that includes everything you need to get your journey started on the right foot. But as they say, time is of the essence, and this special bundle will only be available for a limited time. So pack your bags, don your adventurer’s cap, and be sure to pre-order before September 28. 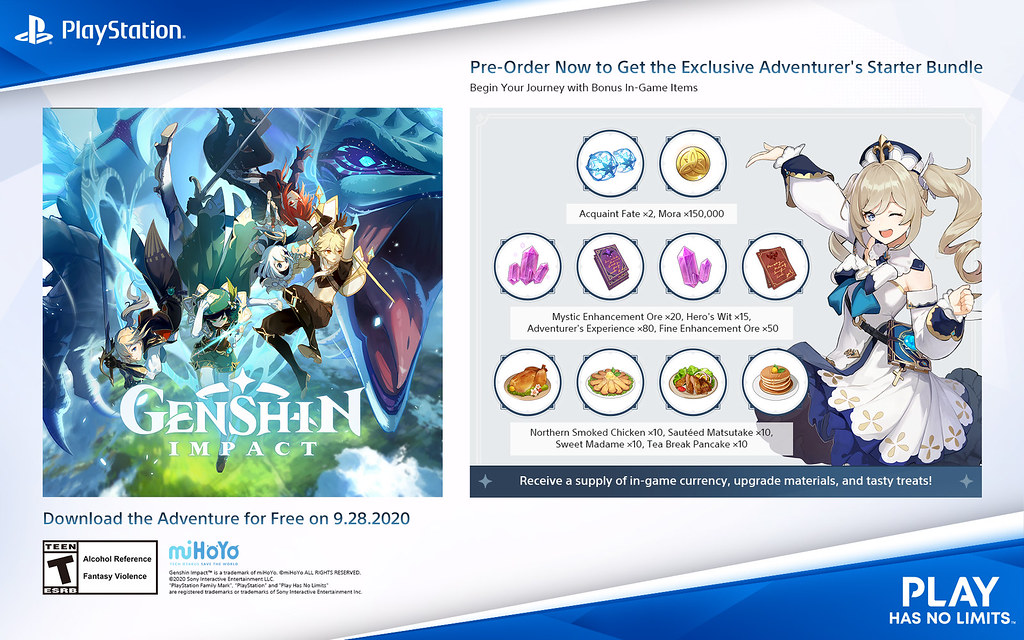 We look forward to seeing all of you in Teyvat!

Brigandine: The Legend of Runersia: Bringing a cult classic SRPG back to PlayStation

Kazuhiro here. I’m excited to bring Brigandine: The Legend of Runersia back to PlayStation tomorrow — this time on PS4! (bonus: it’s playable on PS5). It’s been a long time coming, so we’re celebrating the launch with a free Dynamic PS4 Theme for all...

How MLB The Show 20 is celebrating baseball’s return

Major League Baseball’s 2020 season has arrived, and now is the perfect moment to celebrate Opening Day with MLB The Show 20 Standard Edition, now available for $29.99 MSRP through August 5, 2020. Whether growing your player in the RPG-inspired Road...