First details on the Technomancer class in co-op RPG Outriders

With our third Outriders Broadcast concluded, we’re today excited to share the first details of our fourth and final class with you. Enter: The Technomancer!

“Right in front of our eyes, old tech and hardware we’d tossed away decades ago started shooting out sparks and coming back to life. We watched as the Altered bent and twisted the metal with his mind, shaping it into a machine of death that blew the enemy’s trench sky high.”

The premise of Outriders begins with a failed attempt by the last remnants of humanity to colonize a planet called Enoch. The root of this failure ties back to the existence of an electro-magnetic phenomenon known as the “Anomaly”, which essentially fried all electronic devices more complicated than a toaster. What was previously considered a hallmark describing the pinnacle of Earth’s greatest advancements, now only served to be part of ever-growing scrap heaps. That is, until the arrival of the Altered known as the Technomancers…

Technomancers are one of the four playable classes in Outriders, the other three being the Trickster, the Pyromancer and the Devastator. The ranks of these classes are filled by humans who came in contact with the Anomaly… and survived. Each class boasts its own unique set of skills, passives and mechanics, but today we’ll take a closer look at the Technomancer, as the final and recently revealed class.

As their name suggests, Technomancers are able to manipulate constructs, be they steel or flesh, to their own ends. A Technomancers main skills therefore focus around the construction or “summoning” of deadly weapons of war. They can materialize turrets with different effects, such as Cold or Toxic that will autonomously attack enemies and draw their fire. Alternatively, a Technomancer can also construct an automated surface-to-surface-barrage “Pain Launcher” which packs a tremendous punch while carpet bombing a corridor in front of it. Then there is also the equip-able construct “Tool of Destruction” – and this one’s a doozy. Depending on how you activate it, you will equip either a Rocket Launcher or a Minigun…

A Technomancer’s capability, however, extends beyond electric technology, allowing them to even manipulate the most complex of constructs: biological cells and subatomic particles. 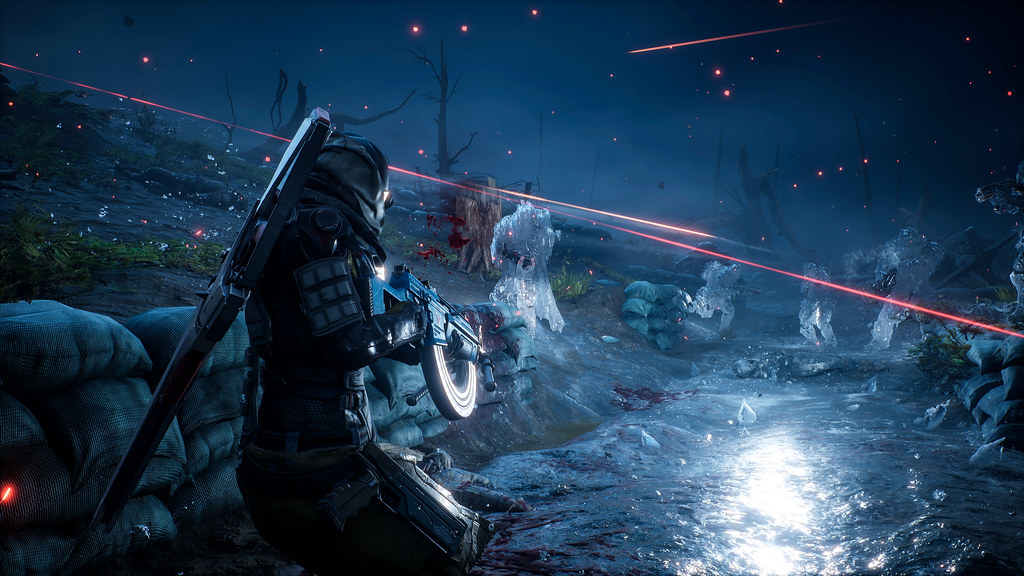 “Trench legend tells of a cornered Technomancer who, desperate to stop an attacking monstrosity, suddenly took control of its subatomic particles to flash-freeze it in mid-air. Another legend tells of one who could hack the genetic code of living cells, making them instantly cancerous, turning his enemies’ own bodies lethal. Many Technomancers are known to help on the battlefield as well, rapidly restoring skin and cell bonds to mend their allies’ wounds. Just don’t expect to be remade exactly as you were before.” – Excerpt from a Journal found on planet Enoch.

But how does this class actually play and what differentiates the Technomancer experience from the other classes? Our latest trailer included gameplay of a Technomancer fighting alongside a Pyromancer and Devastator, which should give you a decent idea on what these classes look like in action.

However, a class’s playstyle is something you really only get a feel for over many hours of your own play and Outriders does give each player and class the ability to customize their build to one that they feel most comfortable with and is most effective. Each class can fulfil the role of a damage dealer, a tank or a support.

That being said, a Technomancer does have certain unique skills and passives that you won’t find with the other classes. For one, certain selectable Technomancer passives make this class most effective with Sniper Rifles. Their construct skills also allow them to add autonomous damage and agro to the battlefield, making them a particularly useful class for players who prefer to play by themselves and without co-op partners. For players who do intend to play with a squad, the Technomancer can bring a host of capabilities to a team mix that may otherwise be solely focused on damage output. 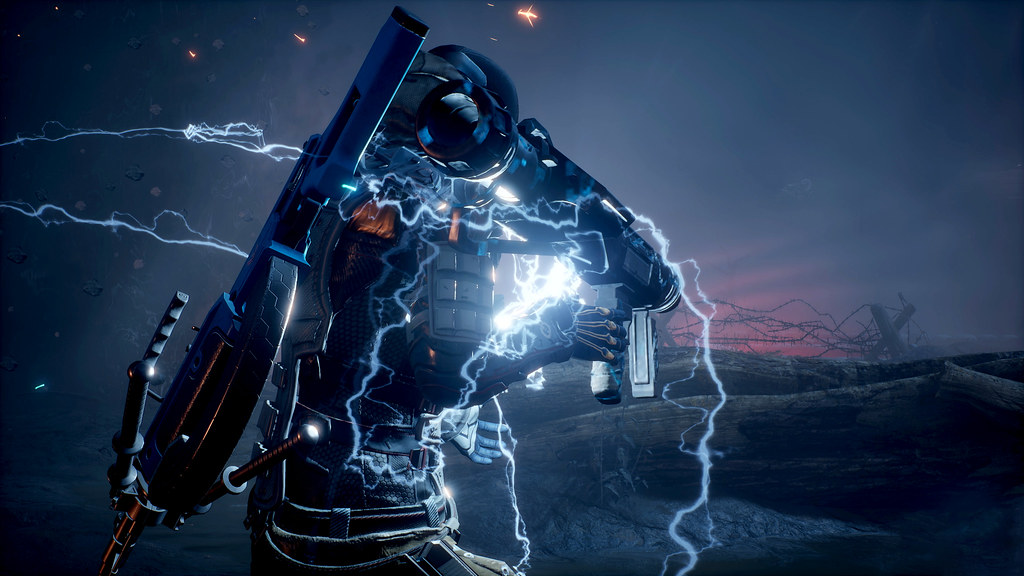 Many of the Technomancers’ skills not only deal damage, but they also include support or crowd-control effects. For example, a Technomancer’s “Fixing Wave” is the only skill in Outriders capable of healing yourself and allies with the press of a button. Additionally, skills such as the “Tool of Destruction’s” Rocket Launcher or the “Scrapnel” proximity mine will interrupt enemies, including bosses that are channelling a skill. With a view to such skills, players looking to get the most out of a Technomancer will need to think beyond raw damage and will need to analyze and be aware of a battles underlying flow. How can you best inflict status effects onto enemies that will allow the rest of your team to maximize the carnage dealt? When will you need to have a boost in healing to hand to prevent an ally going down? When will you need to stop a boss from wiping your team by stopping their skill channel? 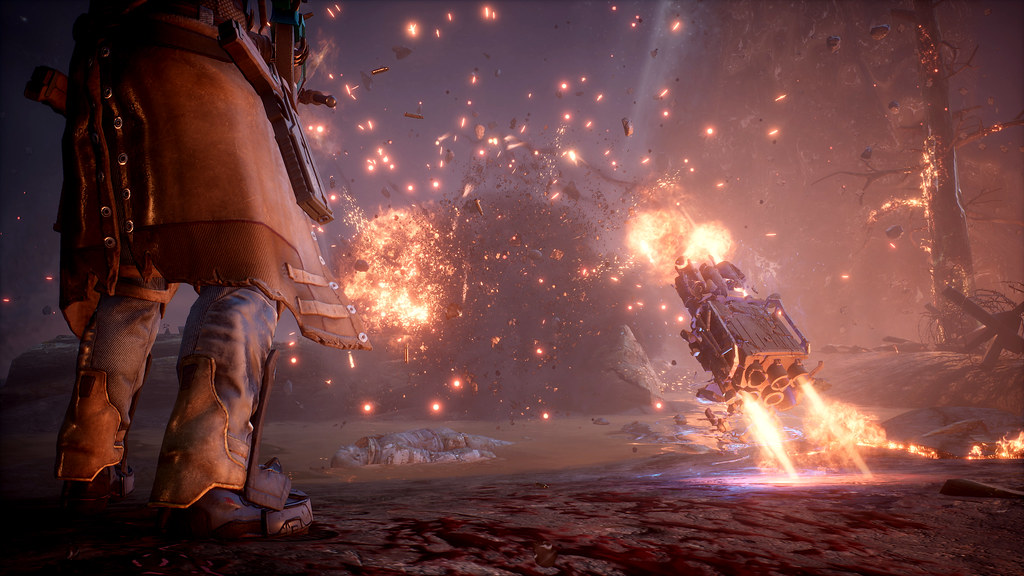 “On the front lines, Technomancers create complicated new mechanisms out of burnt circuit boards and rusted metal, forging with their minds the deadly constructs of war from the detritus of the past. They offer a frightful vision of what humanity is becoming, but they are also a bridge to the past, and all that we have lost from Earth.” – Excerpt from a Journal found on planet Enoch.

As with all classes, there is plenty of nuance to the Technomancer that can only be experienced when playing the class. I do hope that you have enjoyed this little preview into Outriders though, and make sure to tune in to the next Outriders Broadcast if you would like to see more of the Technomancer and the other classes in action.

Outriders is a one to three player co-op RPG shooter set in an original, dark and desperate sci-fi universe. As mankind bleeds out in the trenches of Enoch, you’ll create your own Outrider and embark on a journey across the hostile planet. Outriders will release on PlayStation 5 and PlayStation 4 in Holiday 2020.

Until then, stay safe!

Chicken dinners and shoryukens are on the PS Plus menu this September. Take on 99 other competitors in PUBG: PlayerUnknown’s Battlegrounds or challenge the world’s greatest warriors to a scrap in beat ‘em up Street Fighter V. Let’s take a closer look...

In addition to the three award-winning narrative episodes of Vader Immortal where you explore Darth Vader’s fortress on Mustafar, the series also includes the popular Lightsaber Dojo, where players can spend hours honing their skills with lightsabers...