Firefox Team Looks Within to Lead Into the Future

For Firefox products and services to meet the needs of people’s increasingly complex online lives, we need the right organizational structure. One that allows us to respond quickly as we continue to excel at delivering existing products and develop new ones into the future.

Today, I announced a series of changes to the Firefox Product Development organization that will allow us to do just that, including the promotion of long-time Mozillian Selena Deckelmann to Vice President, Firefox Desktop.

“Working on Firefox is a dream come true,” said Selena Deckelmann, Vice President, Firefox Desktop. “I collaborate with an inspiring and incredibly talented team, on a product whose mission drives me to do my best work. We are all here to make the internet work for the people it serves.” 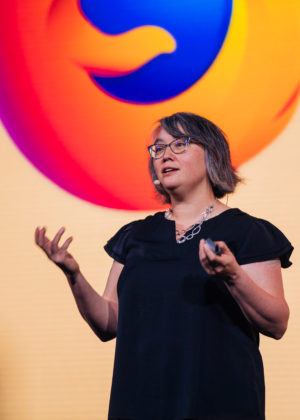 During her eight years with Mozilla, Selena has been instrumental in helping the Firefox team address over a decade of technical debt, beginning with transitioning all of our build infrastructure over from Buildbot. As Director of Security and then Senior Director, Firefox Runtime, Selena led her team to some of our biggest successes, ranging from big infrastructure projects like Quantum Flow and Project Fission to key features like Enhanced Tracking Protection and new services like Firefox Monitor. In her new role, Selena will be responsible for growth of the Firefox Desktop product and search business.

Rounding out the rest of the Firefox Product Development leadership team are:

James Keller who currently serves as Senior Director, Firefox User Experience will help us better navigate the difficult trade-off between empowering teams while maintaining a consistent user journey. This work is critically important because since the Firefox Quantum launch in November 2017 we have been focused on putting the user back at the center of our products and services. That begins with a coherent, engaging and easy to navigate experience in the product.

I’m extraordinarily proud to have such a strong team within the Firefox organization that we could look internally to identify this new leadership team.

These Mozillians and I, will eventually be joined by two additional team members. One who will head up our Firefox Mobile team and the other who will lead the team that has been driving our paid subscription work. Searches for both roles will be posted.

Alongside Eric Rescorla and Mozilla’s mission and serve internet users as we build a better web.