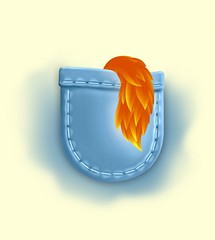 The results from the Mozilla Creative Collective’s “Firefox Goes Mobile” design challenge are in, and I’m happy to announce that the winner is “Pocketfox”, by Yaroslaff Chekunov. As the official emblem of the upcoming mobile version of Firefox, we’ll be using this image as an avatar on social networking sites, on mozilla.com, on t-shirts and more. It makes a great addition to our portfolio of Firefox imagery!

Yaroslaff, who is based in Krasnodar, Russia, cites as his design inspiration, “the Firefox itself, your approach to the web-site execution, and of course my wife who always brings up new ideas.” Be sure to check out his other Mozilla work as well as his general portfolio.

The four runners-up in the challenge were Mauro Henrique de Bulhões Fidelix’s “Hot Navigation”, Emmanuel John Y. Villar’s “One Mask One Family One World”, Joyce Schellekens’ “Firefox All Around the World” and Eric Yeoung’s “MobiFox”. Interestingly, these designers all hail from different countries (Brazil, the Philippines, the Netherlands and Indonesia), which speaks to the incredible diversity of our community. Many thanks to them, and to everyone else who participated, for sharing their time and talents with Mozilla.

We’ve also launched a new challenge at the Creative Collective: “Five Years of Firefox”. Help us celebrate Firefox’s 5th birthday by creating designs based on this milestone. The possibilities are practically endless, but should generally focus on recognizing what a great accomplishment this is for the Mozilla community and what it’s meant for the hundreds of millions of people who use Firefox. The winner will be featured on this blog, turned into desktop wallpaper and t-shirts, and more.

The submission period for “Five Years of Firefox” ends on December 9th, but don’t wait to get started. Visit the design challenge page for more details, and we can’t wait to see what you come up with!