Embrace retro challenge with the color-based action of Pixelbot Extreme

Mark August 4 in your calendar as this challenging retro side-scrolling shoot ’em up releases for PlayStation 4. Its unique color-based shooting mechanic is built around the four colored buttons of your DualShock controller.

Every button shoots one respectively colored rocket that is designed to hit the same-colored enemies and obstacles. This color-based targeting system requires dedication, endurance and learning all rocket buttons by heart. It really tests and trains your cognitive and multitasking skills and results in a truly satisfying gameplay experience.

While you are flying, dodging and clearing your path, you pass the little hero “Pixelbot” through 25 handcrafted levels. Collectibles offer valuable shields, unlock new levels, open boss arenas and reveal the tricky Extreme levels. But be aware: You will die a lot! Fortunately, rapid respawns ensure a good flow so you will never be pushed back too far. 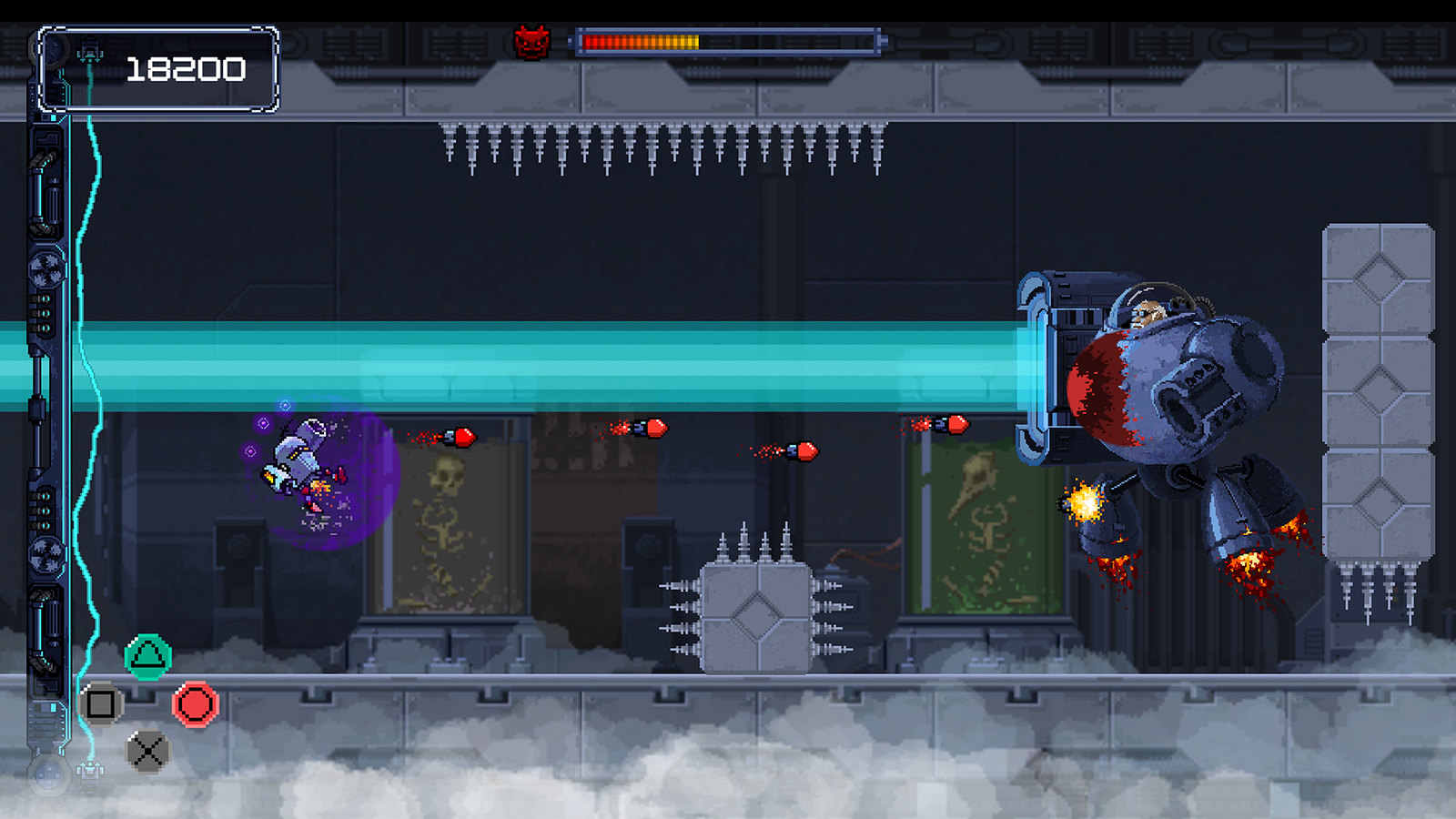 With R-Type being one of our biggest inspirations, its retro feel and hardcore difficulty defined Pixelbot Extreme’s basic vision. Also we fell in love with challenging indie platformers that offer a modern take on retro games. For our first console game, we wanted to achieve the same captivating and rewarding feeling we had back in those days. 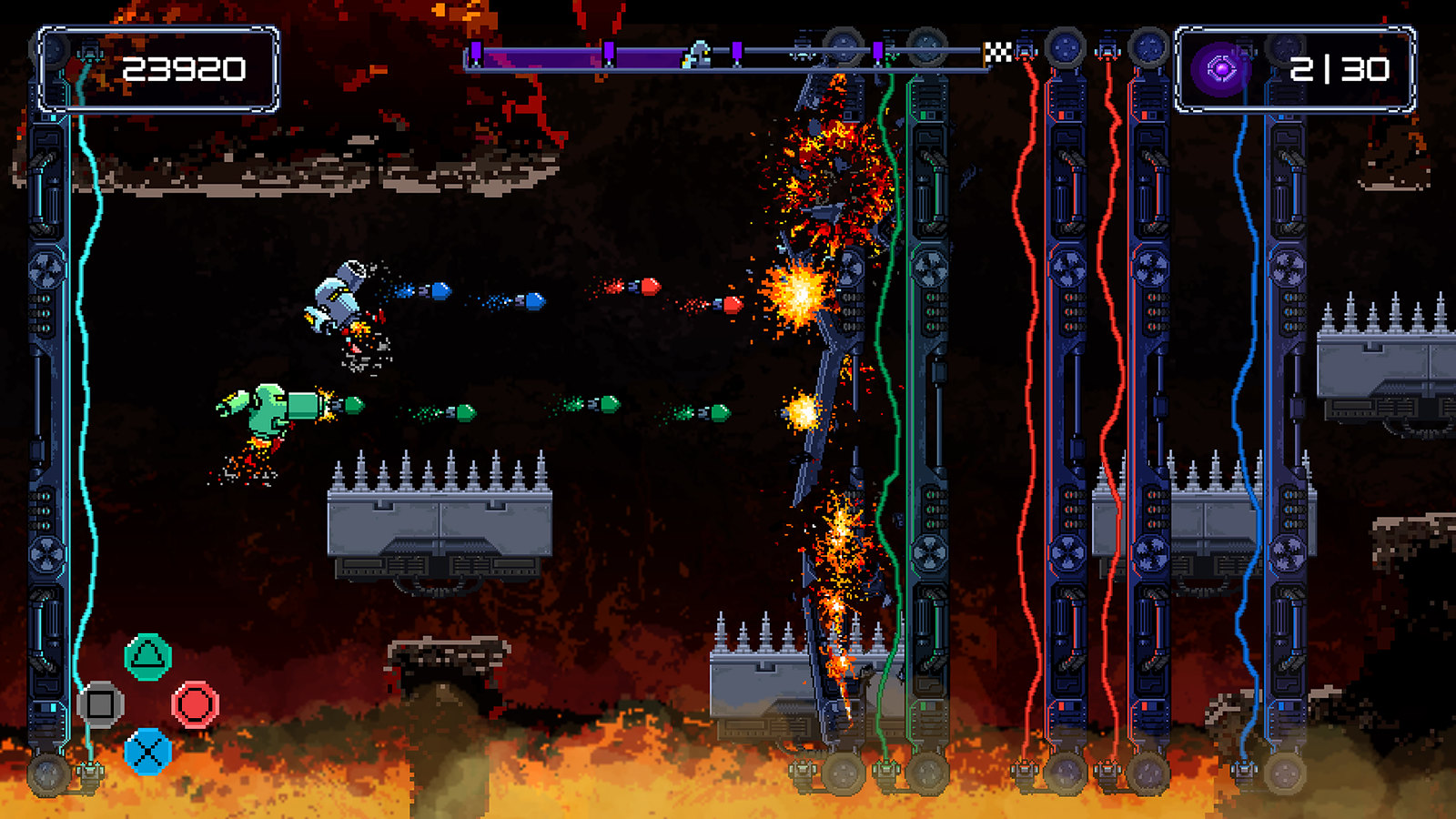 We spend a lot of time testing how to integrate the co-op mode. Instead of having both players shooting all four colors independently, we decided to split up the rocket colors between the two Bots. So you truly need to work together as a team and cannot simply double your firepower. That requires communication and really underlines couch co-op gameplay. 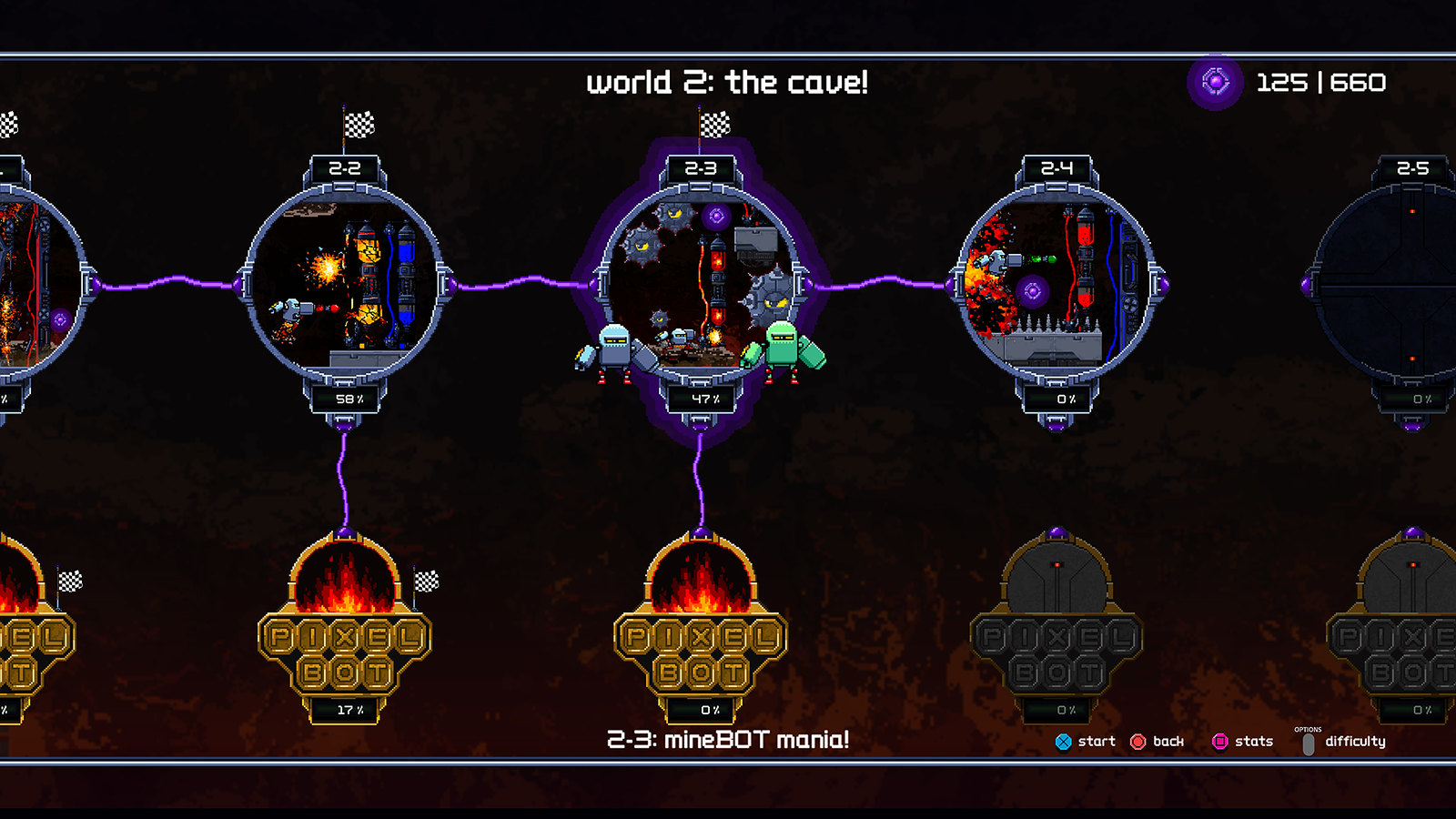 The original and perfectly fitting soundtrack comes from the Slowenian Lo-Fi Band Phonotrash we found during the early development phase while searching for the right mood. Since they also love video games they happily contributed to the project and recorded some exclusive songs. Phonotrash’s music perfectly mirrors Pixelbot Extreme’s retro feel and content. 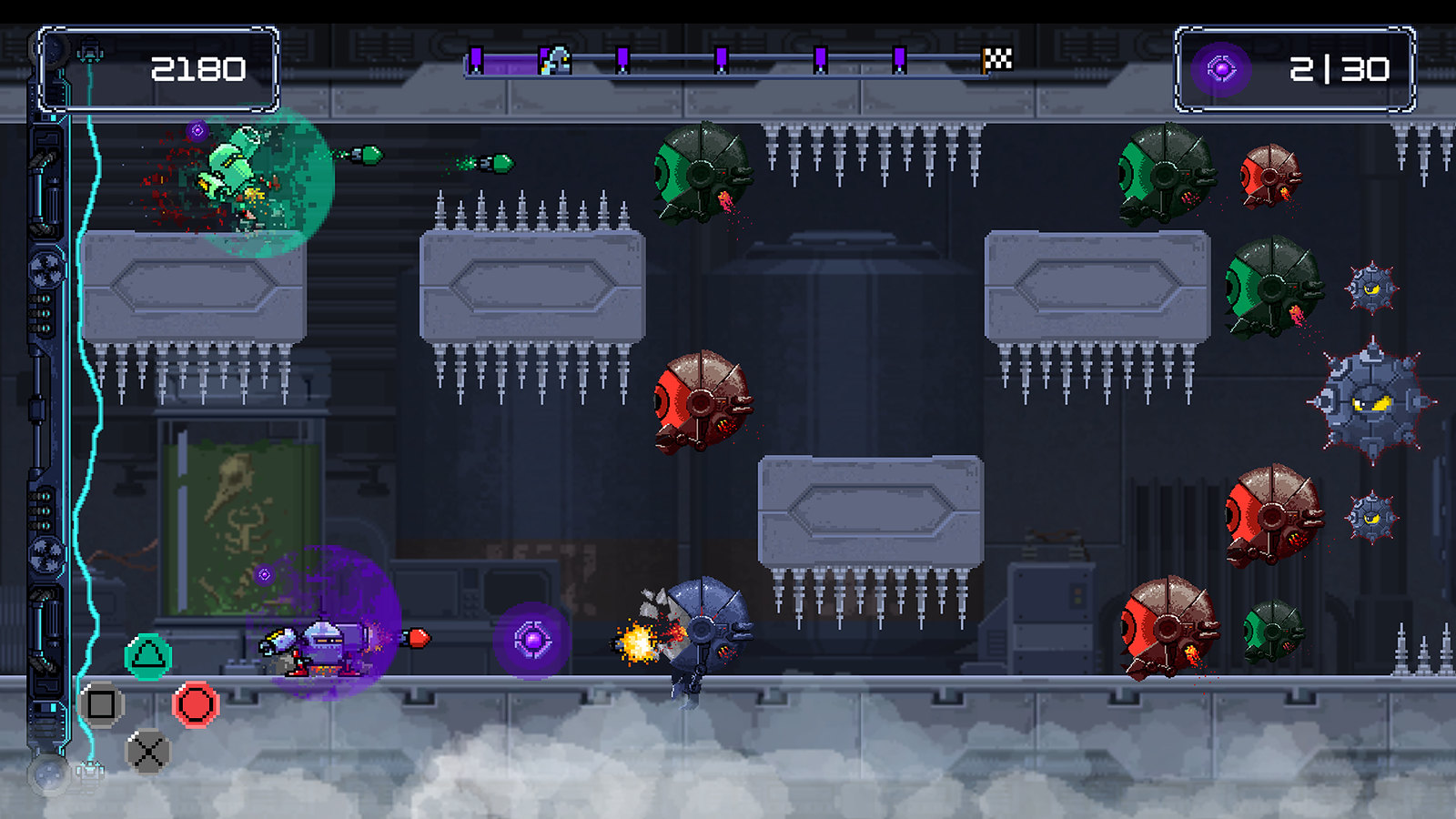 Pixelbot Extreme! was brought to life by my indie game studio PlayHeart Games and a bunch of friends I met during my career. As an eight-years-experienced game and level designer I was working for several bigger studios. During that time, I had the chance to meet Konstantin Dimitrov – a very talented artist and good friend of mine – who breathed life into Pixelbot and his pixelated world.

After six years of putting our hearts, souls and experience into our game, Pixelbot Extreme will finally be released next week on my all-time favorite console PlayStation thanks to Leipzig-based indie publisher FusionPlay. As an Indie developer it definitely feels like a dream coming true when you finally release your first own PlayStation title. 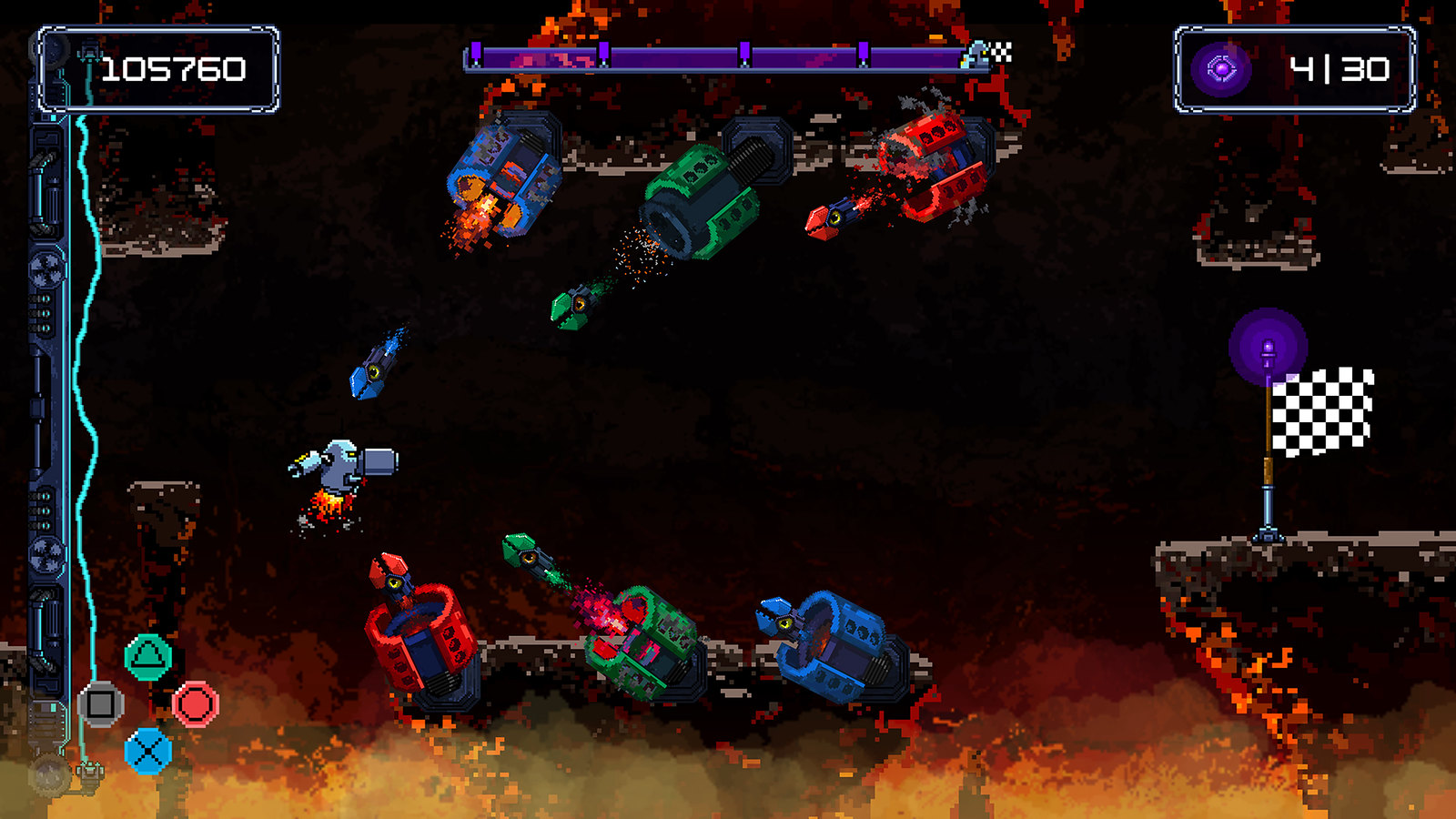 At a game developer meetup in Leipzig, Germany, I met Konrad Kunze – a truly inspiring game designer and developer from FusionPlay. He shared his passion for Arcade games, let me know that he really likes Pixelbot Extreme’s core game and that they are interested in porting and publishing the game for PS4. After co-developing some new features like couch co-op and difficulty selection, the PlayStation version will finally be next week.

And now actually become one with your controller!

Pixelbot Extreme is a realization of taking the best parts of some of my favorite video games and mixing them with my own crazy design ideas. It is not for the easily daunted but is forgiving in terms of keeping you in the flow. Give it a try when it launches next Tuesday and follow our channels. 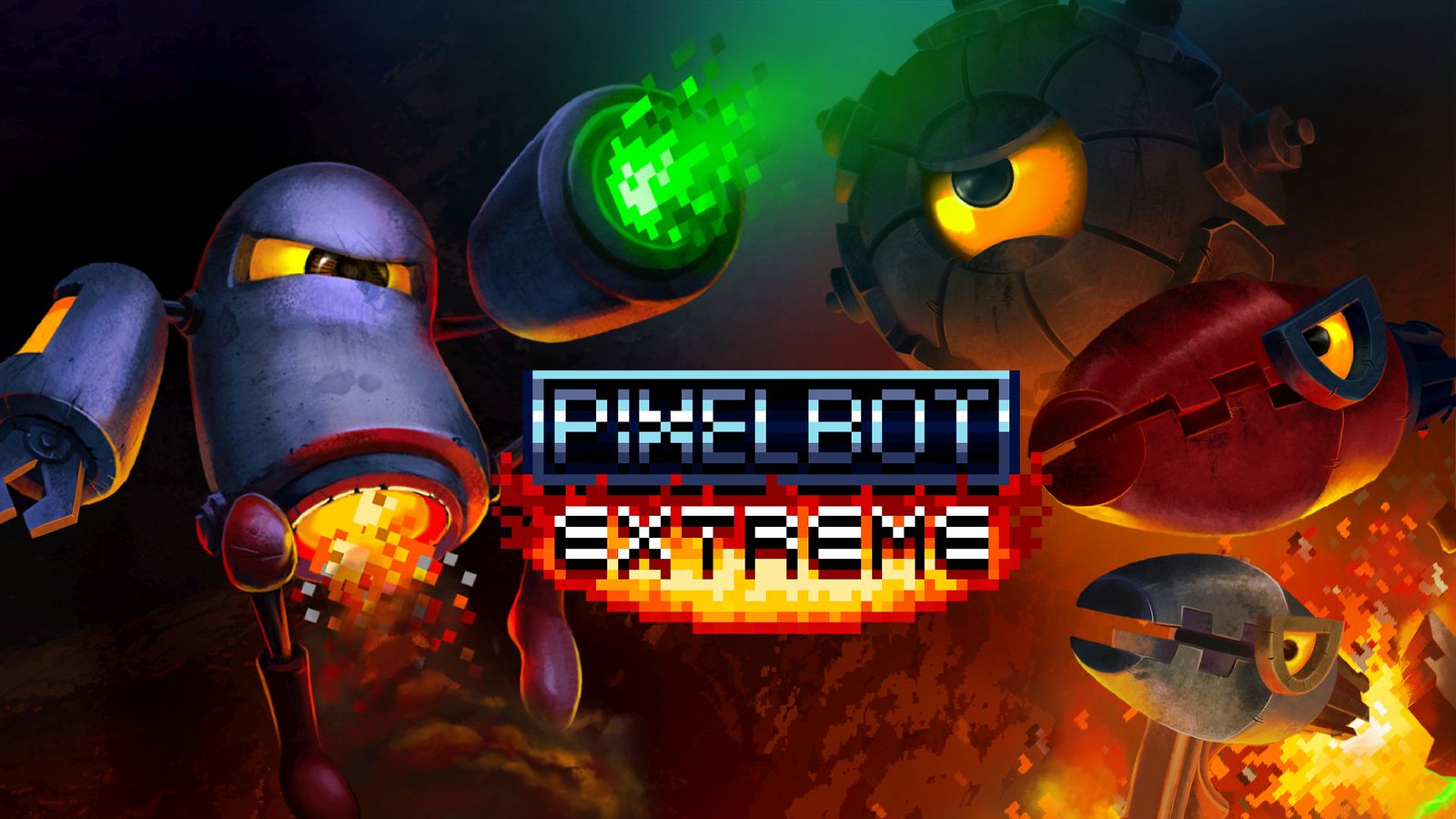 G.I. Joe: Operation Blackout, out tomorrow, is made by fans for fans

Hello! I’m Daniel Winkler with IguanaBee and we’re the developer behind G.I. Joe: Operation Blackout. The team at IguanaBee grew up watching the animated G.I. Joe series, reading the comic books, and playing with the toys. We worked with Hasbro and F...

Star Wars Jedi: Fallen Order is an upcoming third-person action-adventure game made by Respawn Entertainment and EA. On the heels of its reveal at Star Wars Celebration Chicago, we’re giving the world its first look at the next major Star Wars title!