Hello there, everyone! As you may have already heard, we are excited to be releasing Puyo Puyo Tetris 2 for the PlayStation 4 and PlayStation 5 on December 8, so it’s just about that time to mentally prepare yourself for the fun battles that lie ahead – specifically, Skill Battle, a new mode of play featured in Puyo Puyo Tetris 2!

So, you may be asking yourself, just what exactly is Skill Battle mode? Well, we’re happy you asked!

One of the big new additions to Puyo Puyo Tetris 2 over the previous entry is the addition of Skill Battle mode. Skill Battle lets players form a team of three characters from the fantastical worlds of Puyo Puyo and Tetris. Each of these characters brings their own skillset to each match, so the key here is to assemble the right team with the right mix of skills and their effects to maximize your odds of victory. Skills can be activated in battle by expending MP, which is pooled together and shared as a team, as reflected by the green gauge in the middle of your screen.

Here are some important points to keep in mind when forming your overall strategy:

What are Item Cards?

Item Cards are sort of like accessories that will power up your team’s overall stats! Each party can equip up to four Item Cards in a Skill Battle match, so it’s important to create that optimal loadout for each encounter. 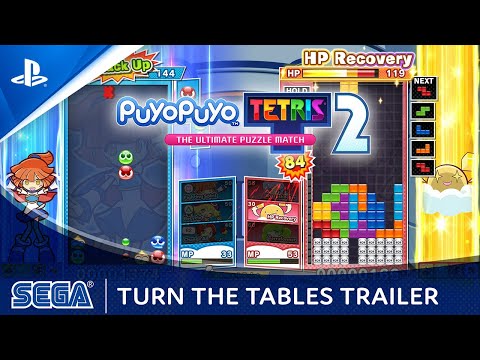 How do I get new characters and Item Cards?

By engaging in Skill Battles in Adventure mode, you will unlock new characters to use in other modes. You will also earn experience points, which will eventually level them up and improve their base attributes (HP, MP, Attack, Defense, and Recovery). When characters reach specific levels, they will also acquire new skills to use in the Skill Battle mode.

Item Cards are randomly dropped in Adventure mode and can offer a variety of bonuses and special effects when equipped on a team. A card’s effect is generated at random, so players are encouraged to play through the Skill Battle mode to obtain better and even more rare Item Cards create the ultimate team.

Speaking of rare Item Cards, by pre-ordering the Puyo Puyo Tetris 2 Launch Edition, you’ll get access to a special set of rare item cards, including three from the world of Sonic the Hedgehog!

After the launch of Puyo Puyo Tetris 2, we have plans to provide additional free content updates to the game, including but not limited to: more characters, new game features, and new accessibility options. More details will be shared at a later date, so stay tuned!

Ready yourself for the Great War. Take the fight across land, sea, and air in Battlefield 1, which launches October 21 on PS4.

LawBreakers Open Beta Lifts Off on PS4 This Weekend

PlayStation peeps, Lordy, we’re nearly there. Our LawBreakers launch on August 8 is coming up soon… um, in less than two weeks. TWO WEEKS. Madness. Really quick, I want to drop some tips and tricks on you PS4 players to put to use in our open beta th...