0
This is the December 2016 edition of This Month in WordPress with CodeinWP.

December 2016 marks another great month for WordPress, and an overall great year! We hope that only awesome things will follow in 2017 as well, but for now, let’s look into everything that happened in the WordPress world in the final month of 2016.

And right out the gate, I have to say that this year’s last hundred meters were all positive and carried us into 2017 on a high note. There’s a new homepage at WordPress.org, plans for WordPress marketing to be done at a larger scale, WooCommerce growth, and a lot more to talk about.

It’s finally happened! The WordPress.org homepage has a new design, which looks much fancier, something closer to what WordPress has become during all these years … from a simple blogging tool to a big website builder.

The discussions about building a fresh look for the official site started last month during WordCamp US Contributor Day, when part of our team – Karol K and Marius Ghitulescu – sat down with Andrea Zoellner and Matt Mullenweg to talk about the new homepage project. The small team first came up with a vision for the page and then prepared the initial layout.

Things started to move pretty quickly after that. Within a couple of weeks, the design team had a finished homepage that we can now all see. What do you think of it? 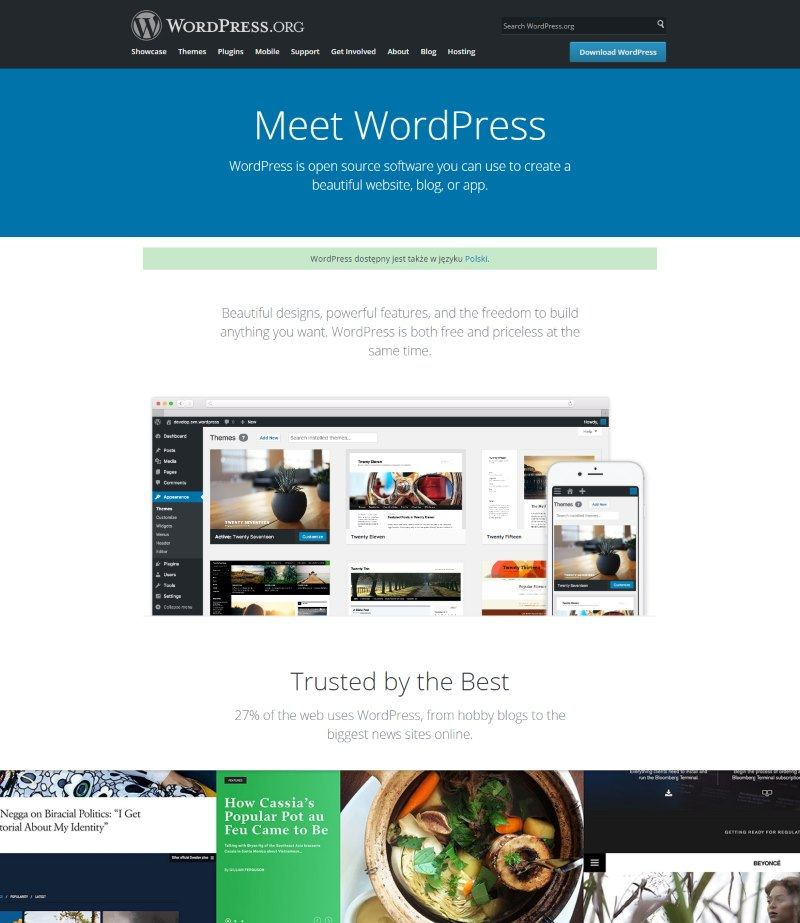 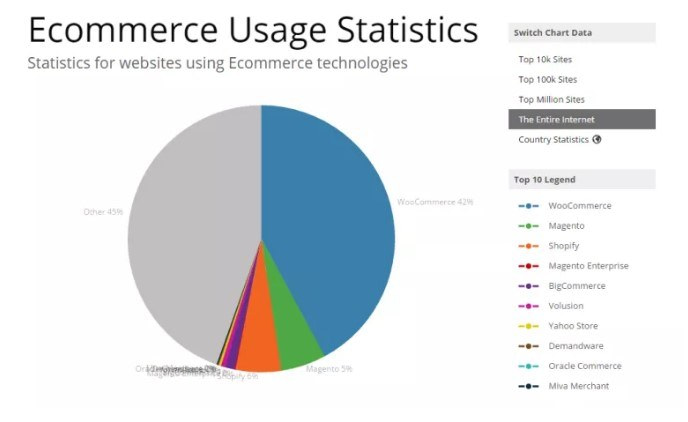 It’s the end of the year and the numbers have been finalized. WooCommerce now powers nearly half of all e-commerce stores on the web. Things are getting pretty serious here and it’s really impressive!

The growth rate is perhaps even more impressive than the raw numbers themselves. For instance, back in August of 2016, it was 39%, which means ~3% growth over the last quarter. Can WooCommerce keep up? Will we see 45% in March?

So, in 2016 it was Vienna. 2017, Paris. Where will we go to next? Which will be the lucky town in 2018? The WordCamp Europe team has launched an online application where local communities have the chance to apply to become the host of this big event.

The application will stay up until February 15th, and the final decision will be made by the end of February. 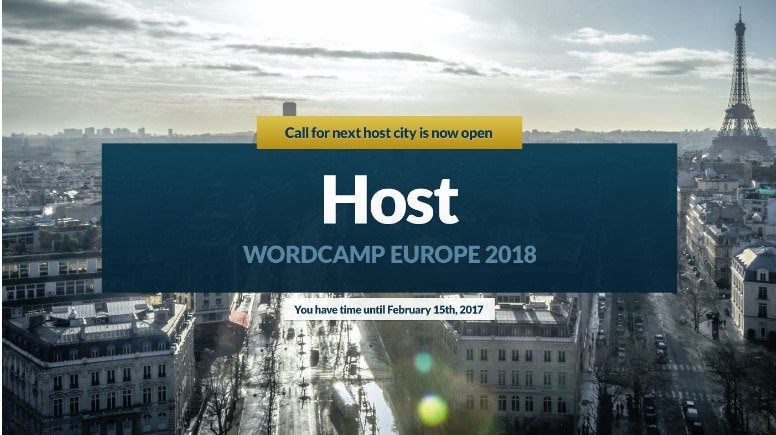 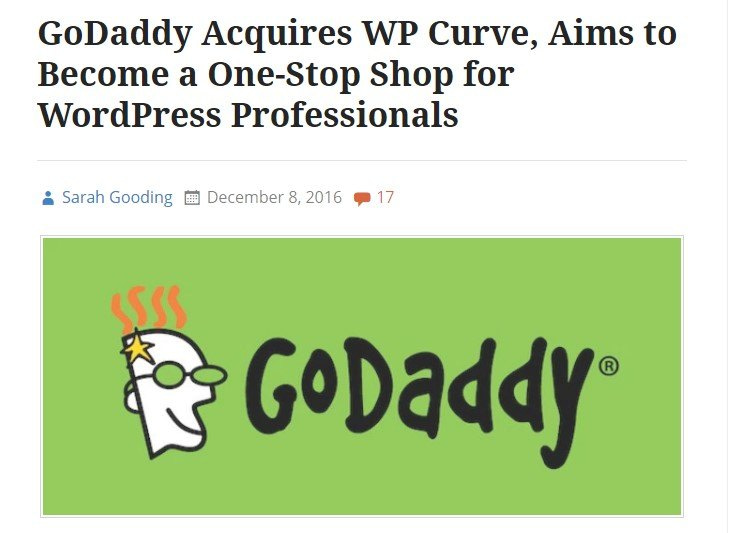 “WP Curve complements GoDaddy’s expanding WordPress offering including managed WordPress and the recent ManageWP addition.” as said at WP Curve in a post announcing the news. Asked why they chose WP Curve, Gabe Mays – head of WordPress Products at GoDaddy – said it is an important part of GoDaddy’s goal to become “a one-stop shop for WordPress professionals.”
Matt Mullenweg Proposes WordPress Growth Council

During his speech in Philadelphia at WCUS, Matt Mullenweg mentioned that WordPress Growth Council will be something that’s going to happen in 2017. He even posted a survey where you can apply if you want to be a member of the council.

An interesting fact is that you don’t need WordPress experience in order to join the council. If you’re a marketer, branding expert, or have any other skills that could benefit WordPress then the council will be happy to welcome you. 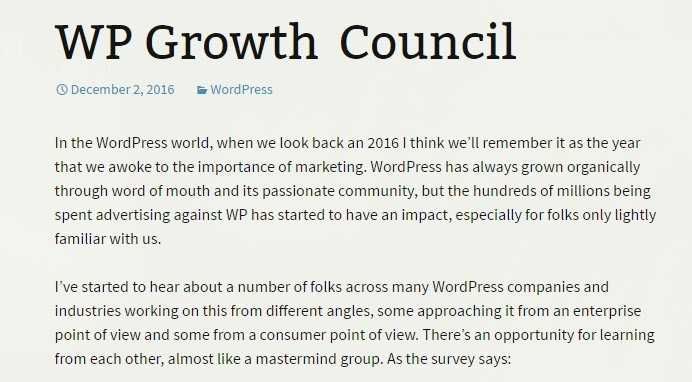 Matt Mullenweg was a busy person during WCUS’s Contributor Day, but he still found some time to do an interview with Brian Krogsgard of Post Status. Here’s the whole thing.

ThemeForest By The Numbers: Thought The WordPress Theme Gold Rush Was Over? Think Again!

How did Envato, the biggest WordPress theme marketplace, perform throughout this year? To give you a hint, 2532 new WordPress themes were added to ThemeForest in 2016. But that’s just the tip of the iceberg…

CodeCanyon By The Numbers: Can You Pay Your Bills Selling Premium WordPress Plugins on CodeCanyon?

Same story with CodeCanyon, the biggest marketplace for WordPress plugins. Some really interesting info there, especially considering this one tidbit: “while representing only 25.5% of all plugins on CodeCanyon, WordPress plugins are driving 71.7% of the total revenues.”

Overview of the WordPress Community in 2016

And since December marks the end of a new chapter for the WordPress community, Cozmoslabs prepared an overview of the most interesting and spicy headlines that were first-page topics in 2016.

MotoPress has their eyes set on the new year, and especially in the SEO department. Here’s their list of potential SEO trends to come in 2017. The WordPress influencers you should follow

Since connections are very important in every business, here’s ThemeFuse’s list of the top WordPress influencers (developers, CEOs, designers, WordCamp organizers) you should follow.

.Blog Domains: Everything You Need to Know

Recently, Automattic launched the .blog extension for WordPress blogs, so instead of myblog.com, you can now have my.blog. If you think this is something you might use, Elegant Themes brings you a full guide on how to get the domain and what it is.

The Ultimate WordPress Checklist: 80+ Tasks for Every WordPress Website Owner

A very nice checklist for every website owner. It goes through a number of important tasks related to keeping your site safe and performing well. For your website security, completing this list should be a must.

Building an Awesome Demo for Your WordPress Theme or Plugin

The demo is the first thing people see when they come to check out your WordPress product. Of course, they’re looking into a lot more things before making the final decision, but the demo has its own big role. Here’s how to create a demo that performs well.

There are two kinds of people: those who find push notifications useful and those who hate them. If you’re in the first category, Kinsta teaches you how to set them up on your site.

That’s it for December 2016. Anything we missed?