Mitch Marner scored the game-winner for the Toronto Maple Leafs in a 4-3 win Tuesday over the host Calgary Flames. Continue reading →

Mitch Marner scored the game-winner for the Toronto Maple Leafs in a 4-3 win Tuesday over the host Calgary Flames.

Marner scored Toronto’s fourth goal at 12:14 of the third period.

With his assist on an Auston Matthews goal, Marner has two goals and four assists in his last four games.

Matthews also had a goal and an assist for the Maple Leafs (6-2-0).

Wayne Simmonds and Travis Boyd scored Toronto’s other goals and defenceman Morgan Rielly had a pair of assists.

Frederik Andersen stopped 23-of-26 shots for the win.

Milan Lucic also scored for the Flames and Jacob Markstrom stopped 17 shots in the loss.

A sluggish start by the Flames forced the hosts to chase Toronto.

Calgary drew even at 3-3 in the third on Gaudreau’s second goal of the game, but Marner’s quick release on a Matthews pass from the boards restored Toronto’s lead.

Sean Monahan beside Toronto’s net feathered a pass up to Gaudreau to score top corner from the face-off circle at 9:03.

Calgary outshot the visitors 18-5 in the second period but still trailed by a goal after two.

Lucic pulled the Flames within one at 14:21.

A Juusu Valimaki pass caromed off Leaf Alex Kerfoot’s skate to Lucic in the slot for him to beat Andersen between the pads. 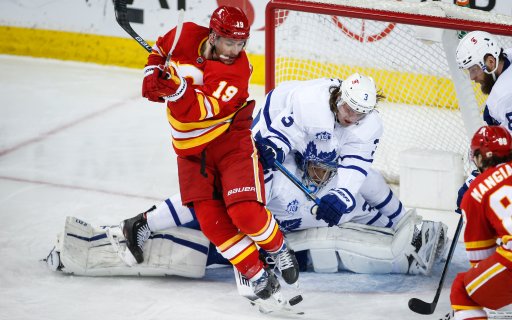 Pierre Engvall dished to an unchallenged Boyd charging into the slot. Boyd scored his first as a Leaf fishing the puck out of his feet and chipping it over Markstrom.

Monahan dealt the puck to an unchecked Gaudreau on Andersen’s right and the Flames left-winger had time to go backhand-forehand on Toronto’s goalie.

Toronto outshot the Flames 10-1 and led 2-0 after the opening period. It took nearly 16 minutes for Calgary to register a shot on net.

Read more: ‘It’s time for people to look at us as a serious contender’: Calgary Flames winger Matthew Tkachuk

Marner fed Matthews with a cross-ice pass, and the latter whipped the puck over Markstrom’s right shoulder at 14:16 of the first period for a power-play goal.

Simmonds scored his second goal in as many games tucking his own rebound by Markstrom’s right toe at 3:44. 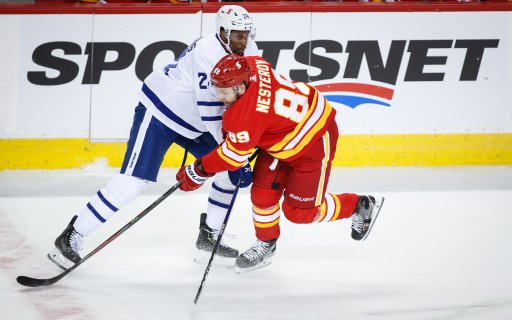 Leafs backup goaltender Jack Campbell was replaced in the lineup by Michael Hutchinson.

Campbell’s leg was injured in the final minute of Sunday’s 3-2 win over the Flames when Matthew Tkachuk fell on him in a goal-mouth scrum.

After enjoying the gentlest schedule to start the season of any team in the all-Canadian Scotia North Division, the Flames will now play 21 games in the next 40 days.

Calgary departs on a five-game road trip with two games in Montreal starting Thursday, followed by three games in four days in Winnipeg.

Toronto faces the Oilers on Thursday and Saturday in Edmonton to conclude a four-game road trip.