The Behind the Scenes as a #WCEU Media Partner: What’s the Experience Like?

Whenever we go to a WordCamp, be it local or global, we don’t just attend. We like to engage and get involved as much as we can, where we can. After volunteering at WordCamp Europe (WCEU) for several years in a row, we started to pivot towards other activities, too. For instance, Sabina Ionescu and Rodica Andronache were part of the organizing team last summer in Belgrade, while Themeisle (our second blog) was a media partner. It was a smooth transition from media supporters in Paris in 2017.

Anyway, the point is that every time we go to an event like this, we want to be there, at the core of it, and see things from an inside perspective. You learn a lot from doing this and you also have much more fun.

This year, we will be in Berlin as volunteers and media partners again, this time with this very blog (we were excited when we received the confirmation). So today, we’re having a flashback of our past media partner experience and wanted to share with you the perks of embracing such an opportunity. 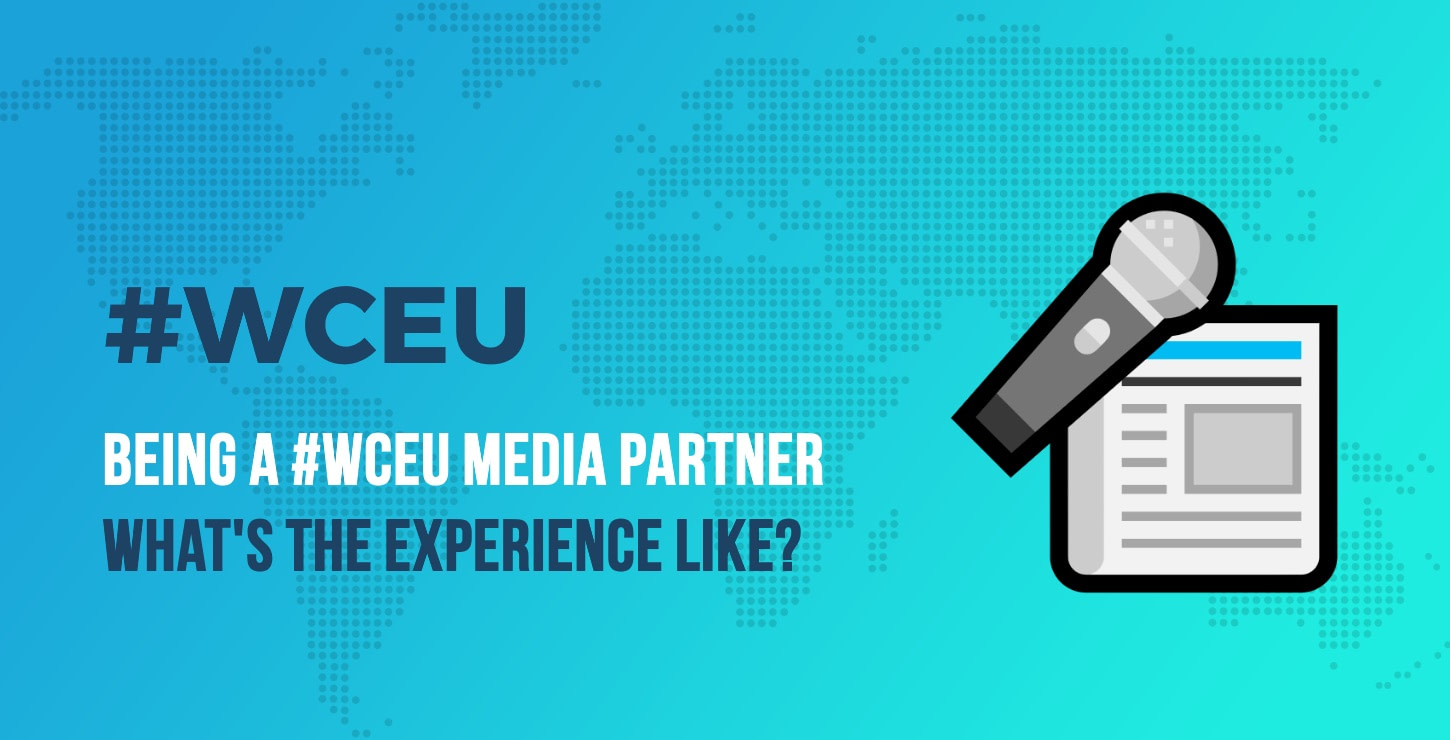 The point of this post is to let you know what’s happening behind the scenes of being media partners at WordCamp Europe and why you should try taking part too – at least once in your life.

Being a media partner is not that easy because, once you get on board, you need to deliver. After all, you take full responsibility for creating content that promotes the event.

From the moment we entered this adventure, we kept in touch with the PR team weekly, if not more often. We tried to keep pace with all the important news and announcements by sharing them with our audience on social media.

Social media and the Themeisle blog were our main sources of promotion. We committed to writing several WCEU-related pieces of content from February until June. I dare to say that, for me personally, this was the main project in the first part of 2018. And, as you can see, we’re doing it again now. Why? More on that later.

With this focus in mind, we had the opportunity to create some interesting and diverse content.

I had the chance to take the pulse of the community right before the event and see how they felt about arriving in Belgrade in the summer. In the same context, I created my first infographic ever, which was really fun. I certainly spent way more time than a designer would, but I enjoyed it so that’s what matters at the end of the day. For this infographic, I worked closely with the PR team at WCEU that provided me with all the stats and information I needed. Those people were really nice and responsive to my requests.

I also collaborated with Christian Mirra for a bunch of comics, after brainstorming ideas with our own marketing team.

Also, check out a few samples of our WCEU content (roundup, infographic, guide, and review):

Plus a few interviews and a roundup with people’s key takeaways after the event right here on this blog. Ionut Neagu, our CEO, also shared a few thoughts in this regard via his monthly Transparency Report.

Another first for us was the live interviews that we did with five speakers.

As a media partner, your duty is to cover the event in many ways, and you can get creative if you wish.

So, apart from doing the writing and visual part from behind a computer, our job was to also interview a few interesting people in person. Chris Fitzgerald and I were in charge of this task, so we planned accordingly with the Public Relations team that helped us big time before and during the conference. Thanks again guys, especially Tess for being so receptive to our needs and questions!

When you are a media partner, you have a room inside the conference venue designated to you (and other partners). You could go there and relax, prepare your work, or whatever you wanted to do. People were friendly as always – both the staff and the other WCEU media partners that were wandering around the place.

It’s just that everyone had to keep it very quiet since many interviews were being recorded at the same time, almost every minute. Now that I think about it, it’s possible that this room might have been the quietest one in the whole venue. The introverts area might be a competitor but I haven’t been there, so I can’t tell for sure.

To be quite frank, I was really nervous before our very first interview and so was Chris. Morten Rand-Hendriksen was the first speaker on our list and we chatted about ethics in web design, a quite interesting topic. Our colleague Radu joined us taking pictures and stalking Morten (just joking) whom he looks up to. 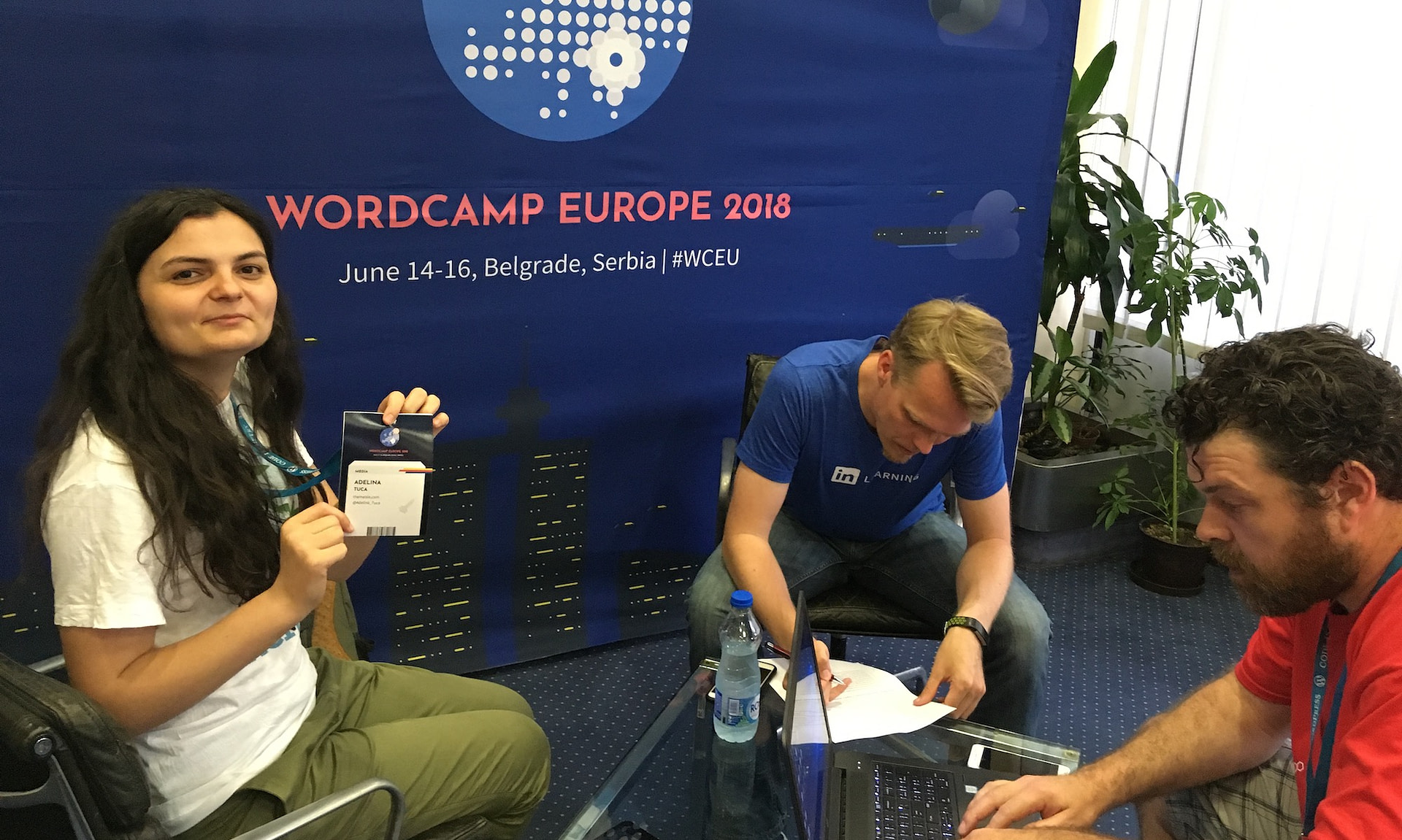 After Morten, Hajj Flemings followed, with whom we talked about his bold goals of bringing 10k businesses online with the help of WordPress. A great and inspiring chat that was! It’s great to learn about the ambitions of other people, it motivates you. 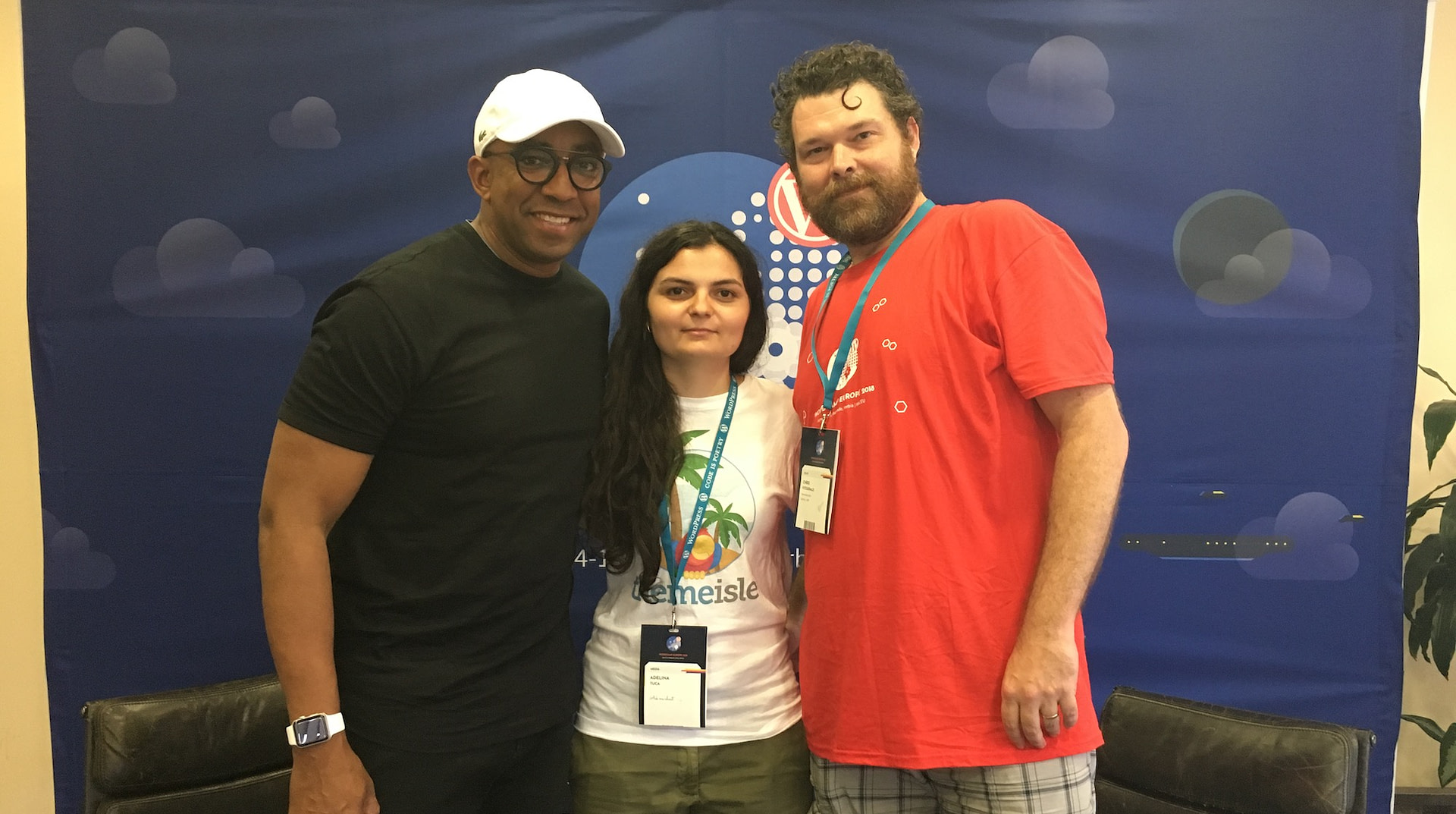 After these two interviews, we kind of started to feel at home in the Media Partners room and our minds relaxed a bit. During the next interviews, we felt more like having another day at the office, leaving apart the slight discomfort that was dragging us back a little at the beginning.

The interviews were split into two slots. Sherry Walling, Sami Keijonen, and Mauricio Gelves were our guests for the next day.

You can find all these interviews in their dedicated category at the Themeisle blog. They are both video and text, so choose whatever version you prefer.

Question 1: You're a PhD, psychologist, podcast and author. How did you get involved with WordPress? pic.twitter.com/H2Jq5NiMln

When we weren’t doing interviews, we were just regular WCEU attendees; or we were taking the pulse of the event asking random people light questions.


The legendary @suyogyashukla tells us about his first #WCEU pic.twitter.com/qu7y3RV9wv

Is it worth being a media partner?

Without hesitation, yes. Why am I saying that? Let’s take it one at a time.

🎓 You learn. As it happens with anything that you do for the first time in your life, you learn. After all, it’s something new for you, and whatever is new teaches you a lesson (good or bad).

🎤 You meet the speakers. I’m not sure how many chances you get to meet the speakers during the conference and to actually chat about their job and their impact in the WordPress community. It’s beautiful to just sit somewhere where no one bothers you and ask these people all the questions that you might not be able to find answers to another way. I mean, you are meeting some of the big names that ever contributed to WordPress. It’s really nice seeing things from this angle.

🌟 You develop new skills. If you didn’t do live interviews before, it might frighten you a bit. “I won’t be able to do it”, “I’m gonna mess up the questions”, “I’m gonna say something bad or wrong in front of the interviewee”, “I will forget their name or call them by another name”. But believe me, after you do it once or twice, you won’t feel anything like this anymore. You can say that it kind of becomes part of your job and you treat it just like that, you relax and begin to enjoy the process. For instance, we were media partners at WordCamp Bucharest afterward and it was way simpler for us to iterate.

🛍️ You promote your brand. Of course, besides our volunteering action, Themeisle got exposure both online and offline. Our logo was there next to other big companies like Torque and WP Tavern; our blog materials got promoted on the official WCEU social media channels; I contacted several people for a few articles on behalf of our company, which again helps building bonds and connections; we were featured in the official WCEU brochure during the conference. I felt proud when I saw Themeisle there on the first pages of the booklet.

👐 You give back to the community. We always want to give back to the community in different ways, and being WCEU media partners is one of them. You help promote one of the biggest WordPress events in the world by dedicating your time and resources to doing it as well as you can. Maybe you are the reason why a WordPress user comes to a WordCamp for the first time out of curiosity, or maybe they decide to get involved more because it’s fun, or find inspiration in other people that are already contributing to WordPress. You are the mediator between these two parts.

👊 You feel like part of the crew. No matter if you’re volunteering or partnering in any way, when you are involved in any activity at the event, you don’t feel like a guest anymore. You feel like you are one of them – the team; like you are there with a purpose and not just attending. And you feel somewhat useful.

You simply get out of your comfort zone, which I always encouraged. 😃

And a bonus! You get free entrance to the event and to the Speakers and Volunteers Dinner. That’s right. One night before the conference starts, there’s this traditional, informal meeting where all the speakers and volunteers gather in a nice, cozy place (picked by the organizers beforehand) to talk about just anything. Food and drinks included. So, if you are a media partner, you are allowed to join this pre-event dinner.

This was our view from the 20-something-floor building where the meeting took place: 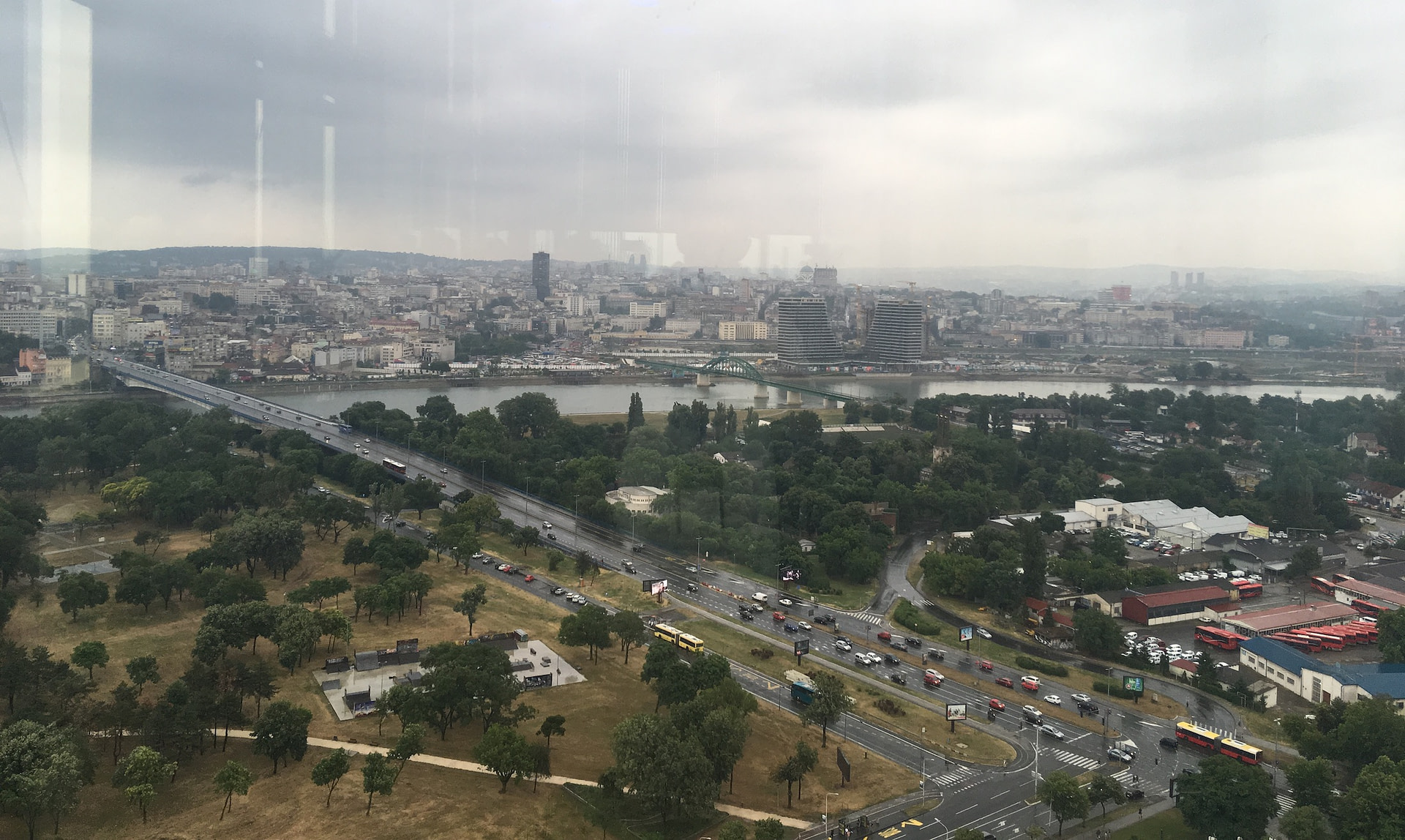 The road to Berlin!

In three months, a few members of our team will be at WordCamp Europe again. Not the whole team, though, but we will still have representatives on the field. Beyond being media partners again, but this time with the CodeinWP blog, the guys who are coming will also volunteer again.

Moreover, our newest theme, Neve, is a micro-sponsor of the event (you can spot it in the Small Business section). So, once again, we are glad to play a small role at this huge gathering of the WordPress community.

Excited to be one of the media partners at #WCEU this year 🥳🥳 pic.twitter.com/6z2DczW1Cl

It’s great to get out of your routine sometimes and try new things. Getting involved in different areas and experimenting with things that you do not normally do can only have two outcomes: you either enjoy it very much and want to repeat the experience, or you learn something anyway.

That’s why we are WCEU media partners again this year in Berlin and have already started to plan our journey, write materials, share on social, and spy on some other interesting speakers that we would like to interview when we arrive in the capital of Germany.

Now, we would love to hear your own story on contributing to WordCamp Europe. Is there anything worth mentioning on your side? Also, if you have questions for us about the experience, let us know via the comments section.

When to Send Emails for Best Results? Here’s What the Data Says

How to Create a WordPress Multilingual Site: Considerations + Step-by-Step Tutorial