TransLink plans to expand the battery-electric bus fleet by 2022. Announcing today a $16 million contract has been awarded to Nova Bus to manufacture 15 more buses. Continue reading →

TransLink has awarded a $16 million contract to Nova Bus to bring 15 more battery-electric buses to Vancouver by 2022.

Announced via Zoom Tuesday, TransLink’s CEO Kevin Desmond said this is part of TransLink’s Low Carbon Fleet Strategy with plans to reduce greenhouse gas emissions by 45 per cent by 2030.

Desmond said the region has been a leader in electrifying transit.

“We’ve been proudly running one of North America’s largest fleets of electric buses trolley buses since the 1940s as well as our fully electric SkyTrain system since the 1980s. We know green power,” Desmond said.

TransLink added four battery-electric buses to its fleet in 2019 and plans to transition the entire fleet to renewable energy vehicles by 2050.

“Families, workers and students from across Vancouver South will now be able to get around the community more easily while reducing harmful emissions.” MP for Vancouver South Harjit Sajjan said Tuesday via Zoom. 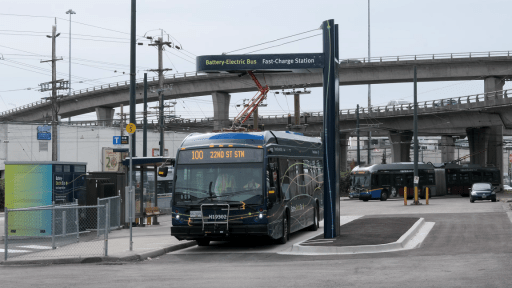 TransLink said the buses can be charged in about five minutes at charging stations while picking up passengers.

The $16 million comes from the Federal Gas Tax Fund, in which the Canadian government gives funds to municipalities to support local infrastructure projects.

Among Tuesday’s attendees for the virtual announcement, Catherine McKenna, the Minister of Infrastructure and Communities who said this is a win-win-win situation.

As in addition to a greener option, providing reliable transit for the public, McKenna said this also supports Canadian workers through the contract with the bus manufacturer Nova Bus, which is headquartered in Saint-Eustache, Quebec.