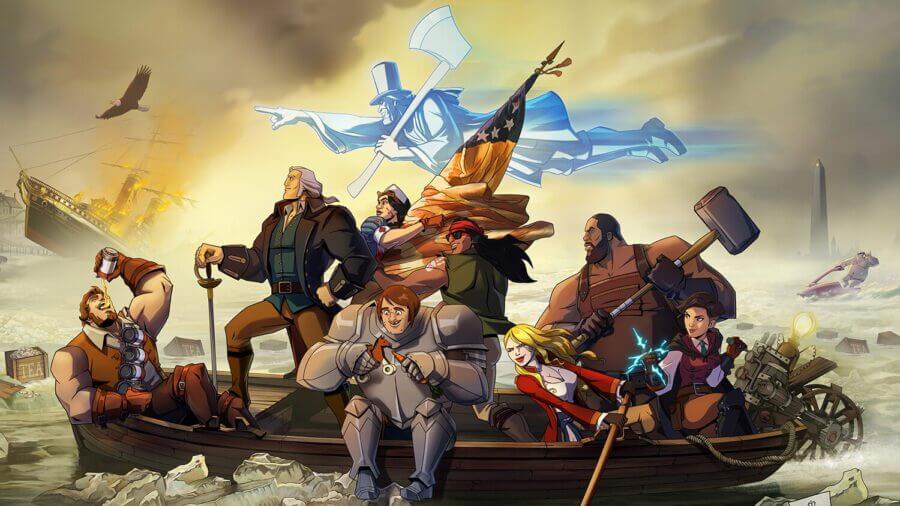 Can the Netflix brand encompass both profane cartoons and educational titles? In light of children’s and family titles dominating weekly Top 10s, contributor Josh Shepherd analyzes whether Netflix may be stretching their brand identity to the breaking point — especially with competitors like Disney Plus hot on their heels.

Promoted as from the executive producers of Spider-Man: Into the Spider-Verse — Phil Lord and Chris Miller — it recasts American historical figures as vulgar superheroes, including George Washington who wields a chainsaw and says f*** several times in the trailer. (Notably, the first U.S. president wrote a book entitled Rules of Civility.)

By slating this film to release worldwide on June 30, days before America’s Independence Day, Netflix is poised to do damage to their brand relationship with many U.S. families who have kids at home, not to mention grandparents and others. Merely seeing such a trailer during this season, some may never return to Netflix … no matter the quality or breadth of family and kids titles.

From the founding fathers who brought you ARCHER, SPIDER-MAN: INTO THE SPIDER-VERSE, THE EXPENDABLES, and MAGIC MIKE…

🇺🇸 AMERICA: THE MOTION PICTURE is only on Netflix June 30. 🇺🇸 pic.twitter.com/OpKD9O514M

Netflix stans who’ve heard waves of outrage before care little about so-called “Karens.” They say: If you don’t like it, don’t watch it. This tongue-in-cheek comedy is rated TV-MA, clearly for adults. Sure, it skewers history sacrilegiously — that’s what this genre has been doing since South Park in the 90s. And the more controversy from the “far right,” all the better for viewership. Didn’t you know that Netflix is the anti-Disney?

But I believe dismissing all criticisms in this case is short-sighted. As one who has praised Netflix’s many quality family entertainment titles, like recent inspiring story Blue Miracle, it baffles me to see the top streamer committing what seems to be self-sabotage here. Doubtless, some Netflix executives had foresight that this release carried risks to its brand reputation but those voices were ignored.

The issues come down to brand equity and brand elasticity, marketing terms that have significant implications.

Why the world loves Netflix

Most anyone who loves movies and TV values how Netflix has changed the ways we consume on-screen entertainment. With relentless innovation, the tech company has pioneered streaming video on demand. The user interface is easy and selection usually deep. Recommendations are sharp. Any device works. Never any ads. Sign me up.

For those of us who are digital natives and never cable customers, Netflix has over a decade of brand equity. Former Netflix VP of Product Gibson Biddle describes the company’s brand identity process from his tenure that ended in 2010. We can still see the same core values at play: ease of use, great value, delight in entertainment.

However, the core appeal of Netflix has now been replicated in services like Disney Plus, HBO Max, and others. Major studios have pulled hundreds of their popular titles from Netflix and now showcase rich movie and TV libraries in their curated services.

In response, Netflix has invested billions in originals to rival other services. Some like The Crown, Making A Murderer, Fyre, Marriage Story, and The Queen’s Gambit have proven to have wide, enduring appeal. In addition, Netflix has tried to “own” targeted genres like anime, sci fi/genre (Geeked), nature docs, true crime, and Black-led cinema (Strong Black Lead). They’ve stretched their core brand in effective ways.

Starting with acquiring StoryBots in 2019, Netflix has moved aggressively to produce kids and family titles. They’ve had hits like Cobra Kai, The Christmas Chronicles and CoComelon. This year, they’re doing well — winning over some past critics with A Week Away and Blue Miracle, plus buying Sony Animation’s entire slate. Hey, whatever works!

With that family focus, their brand promise shifts to encompass safety for young ones and reliability about educational topics. Which is where potential issues come in.

Netflix evolved its brand, but without guardrails

Netflix hasn’t apparently considered all the implications of shifting its brand identity. Trying to “own” both adult animation and family genres can lead to inherent conflicts. Without some guardrails, billions in investments may have less value.

It brings us to America, a non sequitur comedy skewering stars-and-stripes icons like the Liberty Bell and Abraham Lincoln. Akin to Bojack Horseman or Gene Wilder’s screwball 1970s comedy The Adventures of Sherlock Holmes’ Smarter Brother, the more off-the-wall, the better.

But no one considers the Holmes canon as sacrosanct. American history is different.

Netflix starts the central U.S. summer holiday by entering a culture-war fray they probably don’t intend to. In recent months, educators and parents have clashed over how American history is taught. (Personally, I think actor Tom Hanks expressed some common sense ideas on this debate, but I digress.)

Outrageous cartoon America does not affirm nuanced views of history. Maybe it’s funny or clever for Washington, Edison, and Geronimo to battle a werewolf Benedict Arnold, then sink the Titanic.

But consider that some parents misunderstand all animation as for kids … then the Schoolhouse Rock-looking trailer for this film that name-checks Spider-Verse seems like a bad idea. That sound you hear is a wave of negative press about to crash in.

It’s surprising Netflix would release adult animated film ‘America: The Motion Picture’ around July 4
I get that it's tongue-in-cheek comedy
But to see General George Washington, who authored ‘Rules of Civility,’ as a profane chainsaw-wielding vigilante — it's too much in my view pic.twitter.com/6j3V6PUe0W

This release could’ve been buried in another part of the year and not caused much consternation. Someone at Netflix likely used last year’s success of Hamilton on Disney Plus to make the case for a July 4-linked release; yet this animated comedy has nothing in common with that musical.

A creative and bold retelling of America’s founding, Hamilton has some salty language at times. But over years, it had intimate involvement from historian Ron Chernow. Some on the left and right quibble over it, but overall Hamilton has legions of fans across the political spectrum.

Every branding expert will tell you: don’t engage carelessly in raging cultural debates. Releasing America just before Independence Day seems an unnecessary risk of the trust (and billions in investment) built up with parents.

Could future titles bring some families back to Netflix?

Folks in the American heartland enjoy a good laugh, and perhaps some will take to this animated comedy. For other soon-former subscribers, to crudely lampoon historic figures (flawed though they be) days prior to a history-focused U.S. holiday will be seen as a betrayal.

It’s easy to dismiss voices on the right as “puritanical” when they criticize a mature entertainment release. But it often goes unnoticed when conservative critics praise a Netflix release — perhaps despite their readers’ biases.

In a recent report, Parents Television and Media Council recognized Netflix as having the most robust streaming parental controls. Outlets that tend to dunk on the top streamer gave them high marks for Blue Miracle, which ratings reveal may end up as a sleeper hit. Clearly many outlets driven by faith-and-family values can be won over.

Obviously, this isn’t the first strike for this audience segment, as many left Netflix last year due to French film Cuties and others previously due to significant concerns over 13 Reasons Why.

So might some future Netflix releases pull skeptical families back in?

Many in this segment have committed to The Crown and may resubscribe when the final two seasons land. Netflix recently announced family game show Floor is Lava season two is set to film soon. Fans of Jurassic World: Camp Cretaceous will likely be back for season four. There’s Chicken Run 2 coming. And curiosity is high about The Chronicles of Narnia series … but it has been in limbo with no updates for over a year.

Bottom line: competition is good for the marketplace. Disney Plus with its array of slick franchises is rising fast, while July’s HBO Max release Space Jam: A New Legacy could give that platform some serious traction with families. For now, Netflix has a leg up on them with its massive subscriber base.

The streaming wars may have several winners in the end. As Netflix multiplies their target audience segments in a continued bid for world domination, it’s important to realize when one among hundreds of releases could jeopardize key relationships.

Freelance journalist Josh M. Shepherd writes about culture, faith, and public policy issues. His work has been published by outlets including The Stream, What’s On Disney Plus, The Federalist, Christianity Today, Family Theater Productions, and Faithfully Magazine.

4 Challenges in Enterprise SEO Rank Tracking & How To Solve Them