The Edmonton Oilers aren’t planning to rest NHL stars Connor McDavid and Leon Draisaitl before the playoffs, although Dave Tippett has the option of trimming minutes from their workload.

“We’ll see how it goes game by game, but our group is more focused on making sure their game is in order and pushing forward. We’ll monitor things as the week goes on.”

The Oilers face the Canadiens in Montreal for the second time in three days Wednesday before capping their regular season Saturday at home against the Vancouver Canucks.

Edmonton is assured the No. 2 playoff seed in the North Division behind the Toronto Maple Leafs. That leaves nothing at stake for the Oilers, other than giving McDavid and Draisaitl more chances to pad impressive season numbers.

McDavid, who was on the Bell Centre ice for Monday’s pre-game skate, sprinted to a season 100 points in just 53 games.

The 24-year-old Oilers captain is running away with this season’s Art Ross Trophy at 32 goals and 68 assists, followed by Draisaitl at 30 goals and 49 assists.

It’s been 25 years, and before McDavid was born, since an NHL player hit the century mark faster. Mario Lemieux (38) and Pittsburgh Penguins teammate Jaromir Jagr (52) were the last to do it in 1995-96.

With a goal and three assists in Saturday’s 4-3 win over the Canucks, McDavid reached the 100-point milestone assisting on Draisaitl’s second goal of the game and 30th of the season. 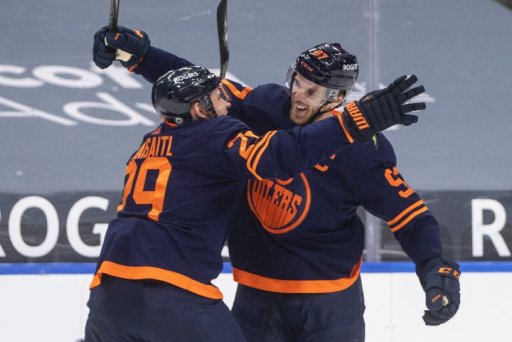 Edmonton Oilers’ Connor McDavid (97) celebrates his 100th point this season with Leon Draisaitl (29) against the Vancouver Canucks during second period NHL action in Edmonton on Saturday, May 8, 2021.

Oilers defenceman Alex Chiasson said he and teammate Ryan Nugent-Hopkins tried to retrieve the souvenir puck for McDavid at the same time.

“I thought selfishly what an honour it’s been to be around Connor the last three years, so I can say one day I touched the puck that he had his 100 points on the season,” Chiasson said.

McDavid has four goals and 12 assists and Draisaitl six goals and six assists in their last five games.

They rank first and third in ice time among NHL forwards averaging 22 minutes 27 seconds and 22:19 respectively.

The Oilers don’t want to lose their stars to injury or wear them out in meaningless games, but the players and the club would also be reluctant to interrupt their momentum heading into the post-season.

With all playoff spots filled except the final berth in the North Division, the league had yet to announce playoff dates as of Monday.

“We want to make sure we’re prepared no matter when we start,” Tippett said.

Watch below: (From April 14, 2021) The Oilers added just one player following the 2020-21 trade deadline: Dmitri Kulikov. 630 CHED Inside Sports’ Reid Wilkins breaks it down.

Seventeen of the NHL’s 31 clubs will have completed their 56-game regular seasons by Tuesday night.

COVID-19 interruptions extended the North Division schedule to May 19 when the Canucks and Calgary Flames finally wrap it.

Edmonton’s Tyson Barrie was two points away from the NHL lead among defencemen. He wasn’t interested in sitting out games before the playoffs.

“It’s probably a bit different guy to guy,” Barrie said. “If you’re battling something or you’ve got some bumps and bruises maybe you take a night off or take it a little easier, but other than that, you’re trying to play and have your game at the top level before you’re dropping the puck on Game 1.

“Hockey is a weird one where you can’t just kind of turn it on, so you’ve got to be feeling pretty good about your game and where you’re at and your game shape. At least for me, it’ll be a process of trying to play these last few games the right way and try to get myself ready, so it feels pretty smooth going into playoffs.”

Harley-Davidson spins out LiveWire into a standalone electric motorcycle brand
Alberta reports another 1,597 cases of COVID-19 Monday, 158 in ICU