Firefighters were called to another tent fire at the Strathcona Park homeless encampment on Thursday evening.

Crews were able to contain the fire to a single tent and knock it down quickly. Fortunately, there were no reports of injuries.

It came after a pair of fires at the camp last week and a string of troubling incidents, including a fatal overdose and an alleged dog attack.

The board closed the west side of the park to campers in February, and will now require all tents and structures to be removed from its northeast corner by April 8. 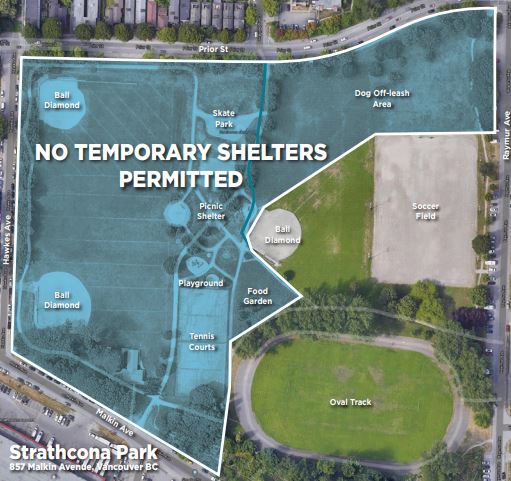 A map provided by the Vancouver Park Board showing the areas where tents and structures will no longer be permitted.

The province and BC Housing have committed to finding housing or shelter for everyone living in the park by the end of April.

“We are working very closely with the partners and coming up with strategies for helping folks get connected to the services,” Rosa said.

The park board said Tuesday new locations across Vancouver will be opened “in the coming weeks” to support homeless people, including two new shelters at 875 Terminal Ave. and 15-27 West Hastings St.