A one-year-old Labrador retriever raised in Regina was among the graduates of the CNIB Foundation’s guide dog program on Wednesday.

Lulu, who turns two in June, was successfully matched with Becki Zerr, a Regina woman who lost the majority of her sight in 2013. Zerr used a white cane for the past seven years and contemplated getting a guide dog earlier, but said she did not take the decision lightly.

In March 2020, she applied for a senior guide dog and had to wait a year to receive Lulu.

“I felt like I was ready to take the next step in my life and move forward as well in a different capacity,” Zerr told Global News.

Zerr said she’s seen her blind friends and handlers navigate with guide dogs and it’s easier than it looks.

“There’s a lot more that went into it than I had even imagined until I started to do the training myself,” Zerr added.

She was glad to do the training in Regina so she could follow her usual routes that she was familiar with.

Lulu has been with Zerr and her family since March 16 and Zerr said Lulu was “well worth the wait.”

Zerr is married and has an active 11-year-old son who loves being outdoors.

Now that she has Lulu, Zerr is able to do things independently.

“I have done things that other parents probably don’t even hesitate to do, such thing as taking your son to the park. I’ve gone to four or five different parks with Bennett over the last few weeks, and just with confidence and a smile on my face. Lulu is just such a gem,” Zerr said.

“As soon as you put on her harness, she becomes business. Like, it’s just pure business. You can see a total shift in her demeanor, but as soon as that harness is taken off, basically a switch is flipped and she becomes like any other family pet and she plays and cuddles and is lovable,” Zerr added.

Now that she has a guide dog, Zerr said she and her son have taken the time to educate the neighbourhood kids that when Lulu is working she needs to remain focused and keep her handler safe. She said it’s important for adults and kids to ignore guide dogs when they are working so they can maintain that focus. 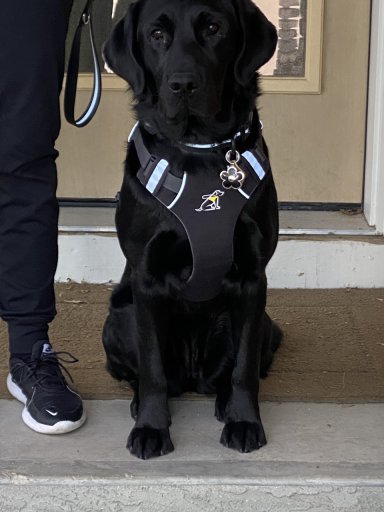 Zerr said so far she’s had a couple instances where she has to remind people not to pet Lulu or distract her. She added that adults can sometimes be worse than kids about not knowing that working guide dogs can’t be pet or distracted.

There are three different career options for CNIB dogs: a guide dog is partnered with a youth or adult with sight loss; a buddy dog is partnered with a child living with sight loss, giving them an opportunity to care for the dog and making it easier to transition into a guide dog partnership in the future; and an ambassador dog is matched with a staff member to promote the program and raise awareness at events.

Read more: All aboard! Guide dogs in training team up with Calgary Transit

With Wednesday’s graduation ceremony, a total of 57 dogs have been raised, trained and matched since the program launched in 2017. This includes 37 guide dogs, 14 buddy dogs and six ambassador dogs placed all across Canada.

Border closures and travel restrictions have impacted the CNIB’s Guide Dog Program. Diane Bergeron, president of the program, said border closures resulted in a more than 300 per cent increase in demand for applications.

Bergeron said many international partners stepped up to help, including Vision Australia Seeing Eye Dogs who offered volunteers to care for the puppies until they could be safely transported to Canada.

Zerr calls Lulu her “shadow” because she follows her everywhere she goes, even if its just around the house. Lulu guides Zerr out in public, too, and recently navigated her through a very important appointment.

“I went for my (COVID-19) immunization at the mass immunization clinic and she came right by my side and helped me navigate as well. She’s just such a confidence booster and allows me to have that independence, reassuring me that wherever I can imagine myself going, I can do it because I have her now beside me.”

Elliot Page Did An Interview With Oprah