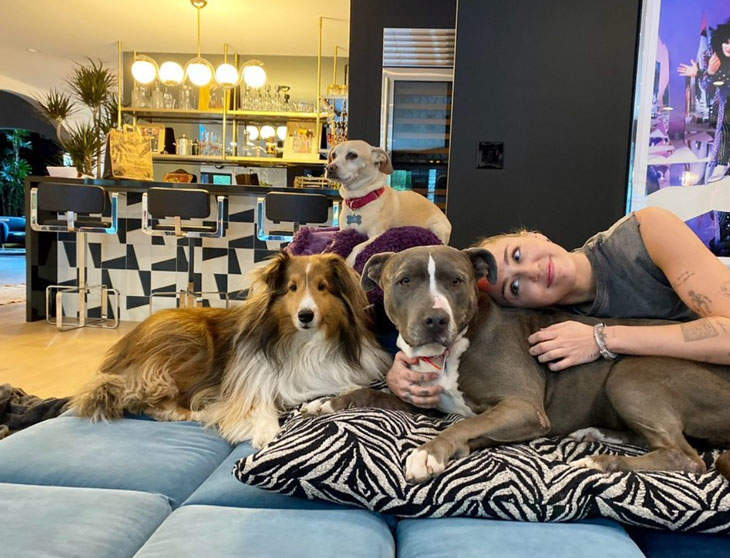 Miley Cyrus’ new house (her last house was destroyed 2018 Malibu wildfires), designed by her momager Tish Cyrus, is featured in Architectural Digest. Imagine if Ellie May Clampett and Jethro Bodine from The Beverly Hillbillies got hitched (yes I know they’re related) and had a baby and then that baby grew up to be a world-famous pop star. That’s pretty much what happened and now we get an inside look at Miley’s “rock and roll” inspired “six-bedroom, seven-bathroom, 6,800-square-foot Southern California retreat.” Think Bella Thorne’s Trippy Twins Funhouse but with an unlimited budget and a live-in housekeeper, and you pretty much got the picture. And I’m embarrassed to report, I don’t hate it.

It’s nice to see that Tish landed on a career that involves both her passions — smoking lots of weed and spending other people’s money. According to AD:

It hasn’t even been a year since superstar Miley Cyrus purchased this six-bedroom, seven-bathroom, 6,800-square-foot Southern California retreat, and yet it’s already completely decorated. More than that, it has been completely Mileyfied. And that’s thanks to the musician’s ace interior design team: Tish Cyrus (also, Miley’s mom and manager of 16 years) and Tish’s design partner Mat Sanders.

“My biggest thing is that when you walk into someone’s house,” says Tish, “I want you to know who lives there, what their personality is, what they love, and what they’re like. I know Miley so well, and we’re so close, so I was really able to do that.” The result? Much like Miley herself, the home is beautiful and boisterous, all the while steady and disciplined in its exuberance.

Here are some pics of Miley’s house:

My mommy. My manager. My interior designer. My role model. My LOVE. No one I cherish more. @tishcyrus @ArchDigest pic.twitter.com/6bUHwaX8zV

Tish says her design “wheelhouse is very much boho chic” and that for herself, she prefers “everything neutral.” But for Miley, “there’s a lot of color. Technicolor.” Sadly, Miley couldn’t even get through one photoshoot without putting her shoes all up on the couch. Miley and Tish are pictured here with Tish’s partner Mat Sanders who probably is the one with the vision but also has to do coffee runs.

Here are more scenes from The Beverly Hillbillies 2021 reboot.

The exterior of the “1950s clapboard house” is painted all black, and inside, it includes such features as “a black-on-black square panel with the F-word spelled out in capital letters” in the kitchen, “a mouth-shaped chair that literally wiggles its tongue,” and a “large and decidedly calm, neutral-toned wellness and gym studio” inspired by “the sublime Amangiri resort in Utah.” Tish says “I didn’t ever go to school for design—and also I’m from Eastern Kentucky, so I think it’s really something.” Oh, it’s something alright!