The Haliburton, Kawartha, Pine Ridge District Health Unit reported another 13 new cases of COVID-19 in its jurisdiction on Wednesday afternoon.

The new cases included eight in the City of Kawartha Lakes and five in Northumberland County. However, the number of active cases remains unchanged at 85.

Northumberland County reported 44 active cases on Wednesday (down two), while there are 36 active cases in the Kawarthas (up three) and five in Haliburton County (down one).

Variant cases of COVID-19 continue to increase, reported at 357 on Wednesday, up from 345 on Tuesday. Northumberland County has reported 225 variant cases, with 113 in the Kawarthas and 19 in Haliburton County.

Of the health unit’s 1,622 confirmed cases since the pandemic was declared 13 months ago, 1,479 are now deemed resolved (nine more since Tuesday) — approximately 91 per cent of the total. 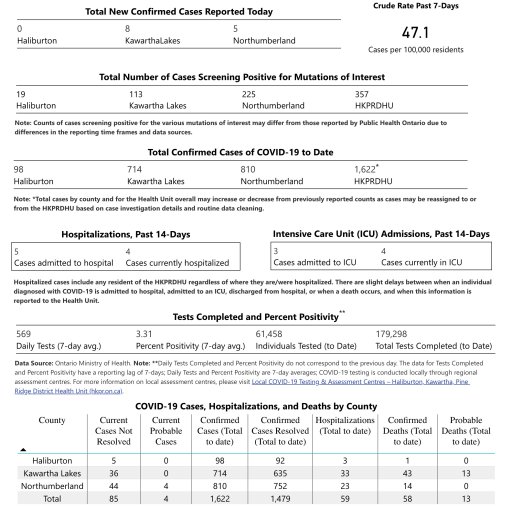 Other data for Wednesday:

Schools within the health unit’s jurisdiction detailed their reports of COVID-19 cases as of Monday.

To book a vaccine appointment, visit the province’s booking website or phone 1-888-999-6488. Phone lines will be open daily from 8 a.m. to 8 p.m. Vaccines are also available at a number of pharmacies within the health unit’s jurisdiction.

GYMVMT to close some locations after bankruptcy filing, vows to keep fighting