The cause of a major fire at a commercial garage at the southern edge of the city Monday remains under investigation, but no injuries have been reported, London fire officials said.

Fire crews responded to the Flying M Truck Service and Collision Centre at 7292 Colonel Talbot Rd., between Southminster Bourne and Orr Drive near the city’s southern limit, around 3:15 p.m. Monday.

At the scene, firefighters were met with billowing black smoke that towered over the area, including over nearby Hwy. 401 to the north.

“It’s too early to have that discussion right now,” said Deputy Fire Chief Matt Hepditch around 4:40 p.m. when asked about a possible cause.

“Reports indicate that there were some propane cylinders that did explode. Smaller cylinders, at this point, that we’re aware of. Also because it is an auto shop, there were some tires, we believe, that have exploded as well.”

Hepditch said that it was believed everyone inside managed to evacuate the building. He added it was very fortunate no injuries had been reported given the size of the fire.

At least 35 firefighters from the London Fire Department attended the scene, along with fire crews from nearby Middlesex Centre and Southwold Township, he said.

Few other details were immediately available.

Colonel Talbot Road was closed through the area as of late Monday afternoon. 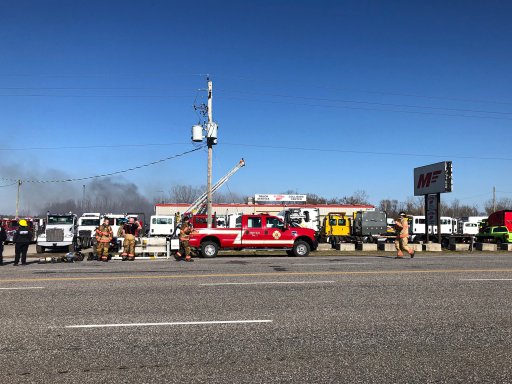 London Fire Department members at the scene of a fire at the Flying M on Colonel Talbot Road near Southminster Bourne, March 29, 2021.

Why does AstraZeneca vaccine guidance keep changing? Experts weigh in