A new park in the Old East Village area is open for use.

The city of London announced Wednesday that Lorne Avenue Park is now officially open and ready to welcome local households.

Officials stress that the the playground itself is open to nearby households under the current stay-at-home order, but the park and pathways are only open for through traffic at this time.

The park stands on the site of the former Lorne Avenue Public School and was designed around the themes of arts and culture, the environment, as well as the history and heritage of Old East Village.

“Lorne Avenue Public School was an important part of the history of the Old East Village and the new Lorne Avenue Park will be an exciting part of its future,” says Ward 4 Coun. Jesse Helmer.

“Residents here are proud of our community and fought hard to keep the school. Thanks to the work of the community, City staff and Council, we now have a beautiful, new park to enjoy for years to come. More open public space in the core could not come at a better time.”

Artifacts from the former school were worked into the planning process, as the old school bell from the original building, as well as exterior signage of the school, are prominently featured. 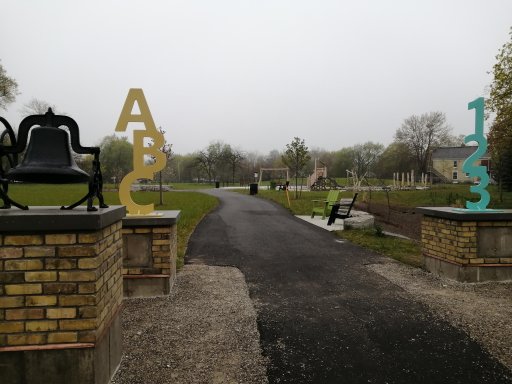 The school bell from the original Lorne Avenue Public School is featured in the park’s design.

“I’m incredibly proud of the collaborative effort that led to the opening of the park,” said Mayor Ed Holder.

“City staff worked with the Lorne Avenue Park Steering Committee and held public meetings with local community members to design the park in a way that would be meaningful to residents of Old East Village but also welcoming and exciting for families.”

As a further nod to the park’s schoolyard history, traditional games like hopscotch and four square have been painted on the ground in the central plaza so that a whole new generation of kids can enjoy them.

As far as features, the park has accessible walkways, an entry plaza, a community stage, a unique playground made of wood, among others. 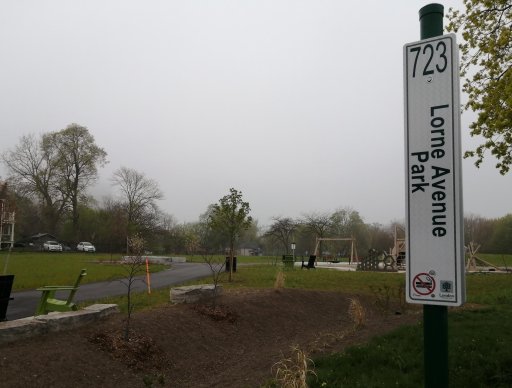 Lorne Avenue Park, at the corner of Lorne Avenue and English Street, in Old East Village.