Living in Myanmar during a military coup like a ‘dystopian world order,’ woman says

Living in Myanmar during a military coup like a ‘dystopian world order,’ woman says

For 25-year-old Thet, each morning in Myanmar brings a constant barrage of what sounds like gunshots, and, more recently, grenades. Yangon, Thet’s home as well as the country’s largest city, “looks like a wasteland now.” If she were to look outside her window, Thet said some parts would resemble a ghost town, while others “look like battle zones.”

“It feels like a dystopian world order,” she says during an interview conducted over Signal, an encrypted messaging service. “The city that I lived in and grew up in is no longer the city that I know anymore.”

Global News has agreed to identify Thet by only her first name due to fear of reprisal from Myanmar’s military. Global News has also agreed to keep social media accounts run by Thet and other members of the country’s resistance movement anonymous to protect her identity. 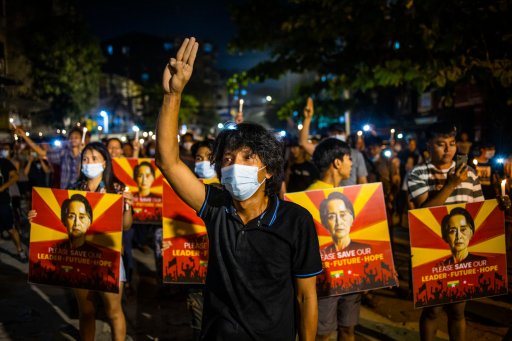 A man flashes the three-fingered gesture while others hold images of deposed Myanmar leader Aung San Suu Kyi during a candlelight night demonstration held out on the street despite a curfew imposed by authorities in Yangon, Myanmar on March 12, 2021.

Myanmar, formerly known as Burma, has undergone three military coups since gaining its independence from the British Empire in 1948. The most recent began on Feb. 1, after the Tatmadaw leadership refused to accept election results that declared civilian leader Aung San Suu Kyi the winner. The military detained National League for Democracy leaders, cabinet and chief ministers, opposition politicians, journalists and activists.

Since the recent coup d’etat, Thet said it all too common to hear about protesters who end up in jail, some of whom she claims are beaten and tortured before being released back home. But some don’t come home.

“We do not know if they’re alive anymore or whether or not they have been buried and their bodies cremated,” she says.

“Lately, we’ve been hearing about cases of people being burned alive.”

Government forces have killed at least 753 protesters and bystanders since the takeover, according to the most recent briefing from the Assistance Association for Political Prisoners, which monitors casualties and arrests. The group says 3,441 people, including Suu Kyi, are in detention.

Reporting by the Associated Press found nearly all of the protests have been nonviolent, but as police and soldiers have increased their use of lethal force, some participants have armed themselves with homemade weapons such as hunting rifles and gasoline bombs for self-defence.

Southeast Asian leaders said Monday that an agreement had been reached with the junta chief to end the crisis in Myanmar, but no consensus was reached that would put an end to the killing of civilian protesters.

Phone and internet service has been suspended in major cities. In Yangon, where Thet lives with her family, the internet is shut down at 1 a.m. and comes back up at around 8:30 a.m.

Thet’s experience is all too common for those living in Myanmar. Burmese Canadian Si Thu Naing, who lives in British Columbia, says it’s been difficult to connect with his family in Myanmar due to the shutdowns, and fears for their safety.

His brother is a journalist, which he says has made his family a target for the military junta.

“A lot of the media personalities are on the run. They are not living in their own houses or places anymore. They are usually separated from their family because of what they are doing,” he tells Global News.

“If they want to arrest somebody, they go into their house and if they can’t find the person they are looking for then they just grab one of their family members.”

Unable to ignore the news as conditions in Myanmar worsened, he started a petition. On March 23, NDP MP Laurel Collins brought that petition to the House of Commons floor urging the international community and federal government to “act firmly to reject the coup and put pressure on our allies and Asian partners to stop providing arms to the Myanmar military.”

“Canadians want our country to be a leader when it comes to standing up for human rights,” Collins says in an interview with Global News. “It’s really important for Canada to condemn violence, to condemn military coups that undermine democracy, especially when there is escalating violence against civilian protesters and media blackouts.”

Naing’s petition also demands Canada bar all businesses from exporting arms and tech to the Myanmar military that can be used against the public.

“We’re trying to push and put pressure on the government and western countries to do differently this time and hopefully resolve this so that there will be a whole lot more stability over there,” Naing says.

Since the military coup began, Canada has imposed sanctions on nine Myanmar military officials and has urged Canadians doing business with Myanmar-related entities to comply. Foreign Affairs minister Marc Garneau also “unequivocally” condemned the junta’s use of force in a statement on Feb. 28, adding that Canada was considering more measures.

Global Affairs Canada reiterated that the federal government condemns “the coup and the violence being perpetrated against civilian protestors” in an emailed statement to Global News, adding that they have “demanded the restoration of the democratically-elected government and the release of all members of the civilian government, activists and civil society leaders.”

“We have also urged the Tatmadaw leadership to provide immediate and unfettered access to Myanmar to the UN Secretary General’s Special Envoy,” the statement read.

Aung Naing Thein, who heads the Alberta Alliance for Myanmar Democracy, has also requested Canada’s government take more aggressive against Myanmar’s military. His petition was put to the House floor on April 14.

Garnett Genuis, the Conservative MP who brought the petition forward, recalled Canada’s call to action against the Rohingya genocide more than one year after Prime Minister Trudeau’s Special Envoy to Myanmar published his 2018 report detailing multiple accounts of mass rape, killings, separation of families and torching of homes and villages.

“Let’s not make the mistake that the government made on Burma in the past,” he says. “Let’s be prioritizing this in discussions of multilateral fora now and pushing for coordinated actions in terms of sanctions against individuals and other measures that will force a change in behaviour.”

But for Thein, the petition is personal. Like Thet, Thein was born and raised in Yangon. He said he wrote the petition in the hopes that it would draw attention to what is happening in his hometown.

“Every day I get a phone call or internet call, the first question we ask is not, ‘How are you?’ Our question is, ‘Are you still alive? Are all of my family members still alive?'” He tells Global News. “I never thought that could be a normal conversation.”

Both of Thein’s parents live in Yangon, as well as his grandparents, aunts and uncles. He says he’s scared for his family.

“The military and security force, they come to the streets and then they randomly shoot people indiscriminately,” he claims, when asked what he hears from his family about the state of Yangon.

Unable to return home, he asked himself: “As a Burmese Canadian here, what can I do?”

Thein’s petition differs slightly from Naing’s, in that it calls on Canada to impose sanctions against members and businesses who are chaired and assembled by Min Aung Hlaing, the senior general in Myanmar and de facto leader following the Feb. 1 coup.

When asked about this distinction, Thein says “the more money they have, the more weapons they will buy and then the more atrocities will happen in Myanmar.”

Even if his petition receives no traction, Thein says he will continue to push for a future where Myanmar is a democratic state.

“As long as this military are in power, in control and killing people, I cannot stop what I’m doing here because that’s not fair for those people in Myanmar who are suffering,” he says.

For some living in Myanmar, like Thet, the future remains uncertain. Last month, Thet says her neighbour’s home was raided by Myanmar militants. She claims her neighbour was taken, and still doesn’t know where he is or if he’s still alive.

So far, she says she has been lucky. To her knowledge, none of her friends have died. Living with her family has eased her anxiety — at least this way, she knows where they are. But for Thet, every day is a dangerous waiting game, each passing moment more uncertain than the last.

“So much has happened and yet everything feels so achingly slow at the same time,” she says. “At this point, I feel less that I’m living and more that I’m surviving and existing.”

At 25 years old, Thet has accepted that her life could end.

“I want to be as dispensable as possible,” she says.

Her actions today may not be the tipping point that sets Myanmar back toward democracy, but Thet says anything that could help future generations of activists is a risk she’s willing to take.

“Right now my rights no longer matter. I cannot speak out about what my opinions are without fear of being killed. Police and military can come into our house at any time and kidnap us. This is not the type of life that I want for myself and for other people in my community, not just the youth who will have to carry us in the future, but also the elders too,” she said.

“For me, the fight is worth it. Risking my life is worth it because we deserve to live in a free Myanmar, a really inclusive Myanmar as well. So that is why I keep organizing in the ways that I can. We must when we have no other option not to. We have already lost so many people. We cannot make their sacrifices go in vain.”

— With files from Reuters and The Associated Press