‘Perfect storm’: How did India’s COVID-19 crisis get so bad?

‘Perfect storm’: How did India’s COVID-19 crisis get so bad?

As the world’s second-most populous country with a fragile health system, the COVID-19 pandemic initially hit India with brute force.

But then, in September, infections began to plummet, leaving epidemiologists and health-care workers puzzled. In February, it was clear the virus’s grip on hospitals was loosening.

As of Feb. 11, official figures showed only 16 per cent of all critical care beds with ventilators in New Delhi were occupied. In November, those figures stood at 90 per cent.

The country’s second wave has since undermined that theory.

Here’s what we know so far about the COVID-19 surge in India.

How did it get so bad?

The pandemic’s latest surge has quickly claimed thousands more lives and decimated healthcare capacities. On Wednesday, the country’s official death toll climbed past 200,000 and, in a new global record, Indian authorities logged 362,757 infections in a 24-hour period, bringing the total number of cases to more than 17.9 million.

India, like other countries, misses many infections. There are also questions about how it counts deaths resulting from the virus. It reported 3,293 deaths alone on Wednesday — a single-day record.

The World Health Organization (WHO) told the Financial Times that claims of widespread immunity were probably exaggerated, and health experts say the government’s premature declaration of victory over the virus may have sent the wrong message, leading to lax adherence to COVID-19 safety protocols.

The deadly second wave was likely caused by a “perfect storm” of mass gatherings, more contagious variants and low vaccination rates, WHO spokesperson Tarik Jašarević warned at a briefing on Tuesday.

Some scientists argue that earlier infections were primarily within poorer communities and that wealthier people, who had started to socialize again, are increasingly being impacted. In the summer, Prime Minister Narendra Modi lifted a slew of restrictions. Modi also refused to call off a massive religious festival that ultimately drew hundreds of thousands of Hindu pilgrims from across the country, and has since been dubbed a super-spreader event. 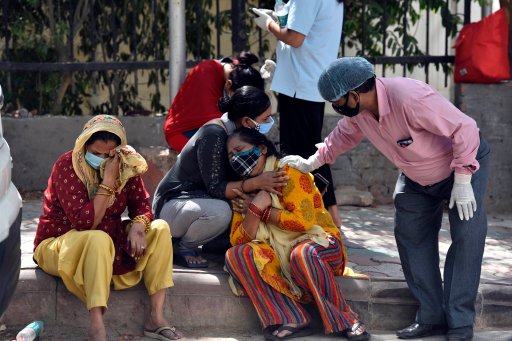 “The virus may be getting into populations that were previously able to protect themselves,” Ramanan Laxminarayan, an epidemiologist in Princeton University, N.J., who is based in New Delhi, told Nature.

As vaccines started to roll out, Laxminarayan said people likely started to let their guard down more, returning to travel and weddings.

Any initial success seen in India can’t be attributed to vaccines, since the government only began administering shots in January.

So far, India’s vaccination program appears to be struggling. Nearly 10 per cent of the country’s population have received one jab, but just over 1.5 per cent have received both vaccines.

The country is currently giving out jabs of two vaccines — one by Oxford-AstraZeneca (Covishield) and one by Indian firm Bharat Biotech (Covaxin). Russia’s Sputnik V vaccine was approved for use in the country in April, and several other candidates are in different stages of trials and approvals.

In response to the crisis, India will open vaccine eligibility to anyone over the age of 18 as of May 1, but shortages have already affected the vaccine rollout in many states.

The country is home to one of the world’s largest vaccine manufacturers, the Serum Institute of India (SII), which has been feeding doses to other countries — including Canada — for months. India has since imposed export controls to meet domestic demand but SII’s CEO recently told local TV that its production capacity was “still short of being able to supply to every Indian.”

“I do feel frustrated that India did not roll out the vaccination drive more aggressively while the curve was in its valley,” Dr. Bhramar Mukherjee, a biostatistician at the University of Michigan, told the BBC. 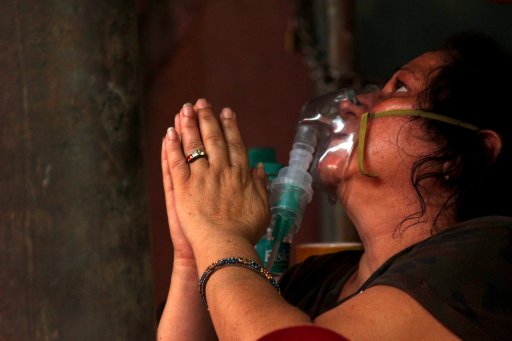 A woman suffering from a breathing difficulty due to the coronavirus disease (COVID-19), prays while receiving free oxygen support outside a Gurudwara (Sikh temple) in Ghaziabad, India, on April 28, 2021.

What role did variants play?

One of these is the B.1.1.7 variant, which was first identified in the U.K. This strain is considerably more transmissible, potentially increases the risk of death, and some studies suggest it could be more equipped to evade immune systems, meaning there’s a better chance a person who has been vaccinated or already had the virus could be reinfected.

A recent analysis found 81 per cent of 401 recent samples from the state of Punjab were of this strain. It is now considered the dominant strain in Punjab.

A newer variant, B.1.617, first detected late last year in the Indian state of Maharashtra, may also be a key contributor. Though it’s unclear just how much of a role it’s playing, it has quickly become the dominant strain in Maharashtra.

Higher transmissibility of this variant is not established as yet, India’s Health Ministry said in a statement on April 16, but it’s drawn attention because it contains two mutations that have been previously linked to increased transmissibility and an ability to evade our immune systems.

Experts also point out that India does not perform widespread genome sequencing to determine whether the B.1.617 variant is driving the latest surge.

However, early modelling shows the variant has so far had a higher growth rate than other variants in the country, suggesting increased transmissibility, the WHO said in its latest weekly epidemiological update.

What is being done?

Night curfews and weekend lockdowns have been reinstated in some states, including Maharashtra.

The national capital of New Delhi is also in lockdown. Some states have reinforced certain restrictions, like bans on travel and nonessential activities.

Modi has maintained that lockdowns should be a last resort and has stopped short of instituting one nationwide.

India has also called on its armed forces to help, including releasing oxygen supplies from armed forces reserves to supplement a rapidly waning supply. 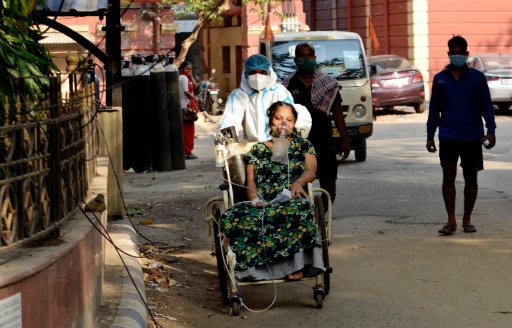 A Covid-19 patient on a wheel chair goes for a medical test inside a government hospital in Kolkata, India, 27 April, 2021.

With hospitalization and deaths reaching record highs, India is also looking at other nations to help it out of the depths of this second wave.

Singapore, Germany and the U.K. sent oxygen-related materials to India over the weekend, and the European Union is coordinating with the bloc for more.

The U.S. has also offered to help with PPE, COVID-19 tests, and oxygen supplies, as well as send raw materials for vaccine production to strengthen India’s capacity to make AstraZeneca doses. President Joe Biden vowed to share up to 60 million doses of its domestically made AstraZeneca vaccines with other countries in the near future, though it’s unclear how many of those doses will go to India.

— with files from the Associated Press and Reuters